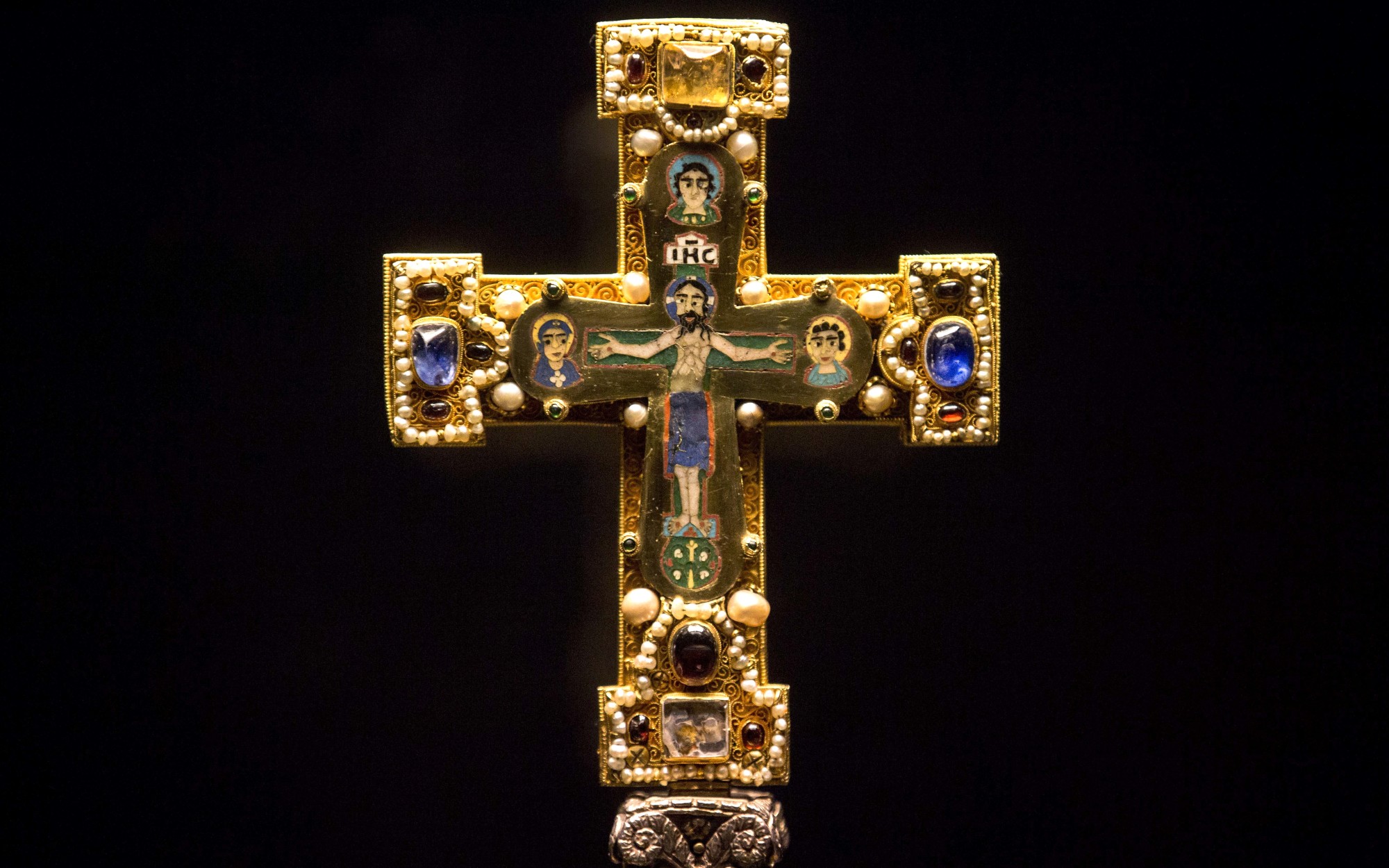 A medieval cross, part of the Guelph Treasure collection, is displayed at the Bode Museum in Berlin. Heirs of several Nazi-era Jewish art dealers have spent nearly a decade trying to persuade German officials to return it.

Two years after Adolf Hitler took power in Germany, the Nazis achieved one of their cultural goals: the return of the Guelph Treasure, a collection of medieval Christian relics.

Under pressure from Hitler’s deputy Hermann Goering, a consortium of Jewish art dealers agreed to sell the collection to the Prussian State Museum. On June 14, 1935, Saemy Rosenberg signed the sale documents in Berlin on behalf of his partners, receiving about one-third of what they had paid for the items in 1929.

On Monday, the Supreme Court will consider whether Rosenberg’s grandson and heirs to two other art dealers can sue Germany and its state museum to recover the treasure or obtain compensation for the loss.

“This was a forced sale to one of the greatest art thieves of all time. And it was literally a present for Hitler,” said Jed Leiber, a musician and record producer in Los Angeles. He was referring to reports that Goering later presented the treasures to Hitler.

Most of the collection, known as Welfenschatz in Germany, is on display in the Bode Museum in Berlin.

Not long after the sale, Rosenberg and his family left Germany for Amsterdam, where his daughter is said to have been a playmate of Anne Frank. From there, they moved to London before finally settling in New York City after the war, where Rosenberg reestablished himself as a prominent art dealer.

In an interview, his grandson remembered the “wise, kind and elegant man” who taught him how to play chess. But he did not learn until decades later, long after Rosenberg’s death in 1971, about his grandfather’s role in the sale of the Guelph Treasure.

It is one of two Holocaust-era cases to be heard by the Supreme Court on Monday, and both turn on whether a foreign state — in this instance Germany or Hungary — may be sued in the United States for “rights in property taken in violation of international law.”

Usually, foreign governments and their agencies are shielded from suits under the Foreign Sovereign Immunities Act of 1976. But there is an exception for an “expropriation” that violates international law, and the federal appeals court in Washington last year refused to dismiss the suits against the Hungarian national railroad and the German state museum because the alleged seizures of property were acts of genocide.

“Nowhere was the Holocaust executed with such speed and ferocity as it was in Hungary,” the appeals court said in Simon vs. Hungary. In the summer of 1944, “Hungary rounded up more than 430,000 Jews for deportation to Nazi death camps,” the court noted. Government officials, including agents of the state railroad, organized four daily trains to shuttle victims to their deaths. Before cramming between 70 and 90 people into each freight car, railroad employees robbed them of all of their possessions.

Rosalie Simon and 12 other survivors of the death camps sued Hungary and its railroad, and the D.C. Circuit appeals court, by a 2-1 vote, rejected Hungary’s claim of immunity. 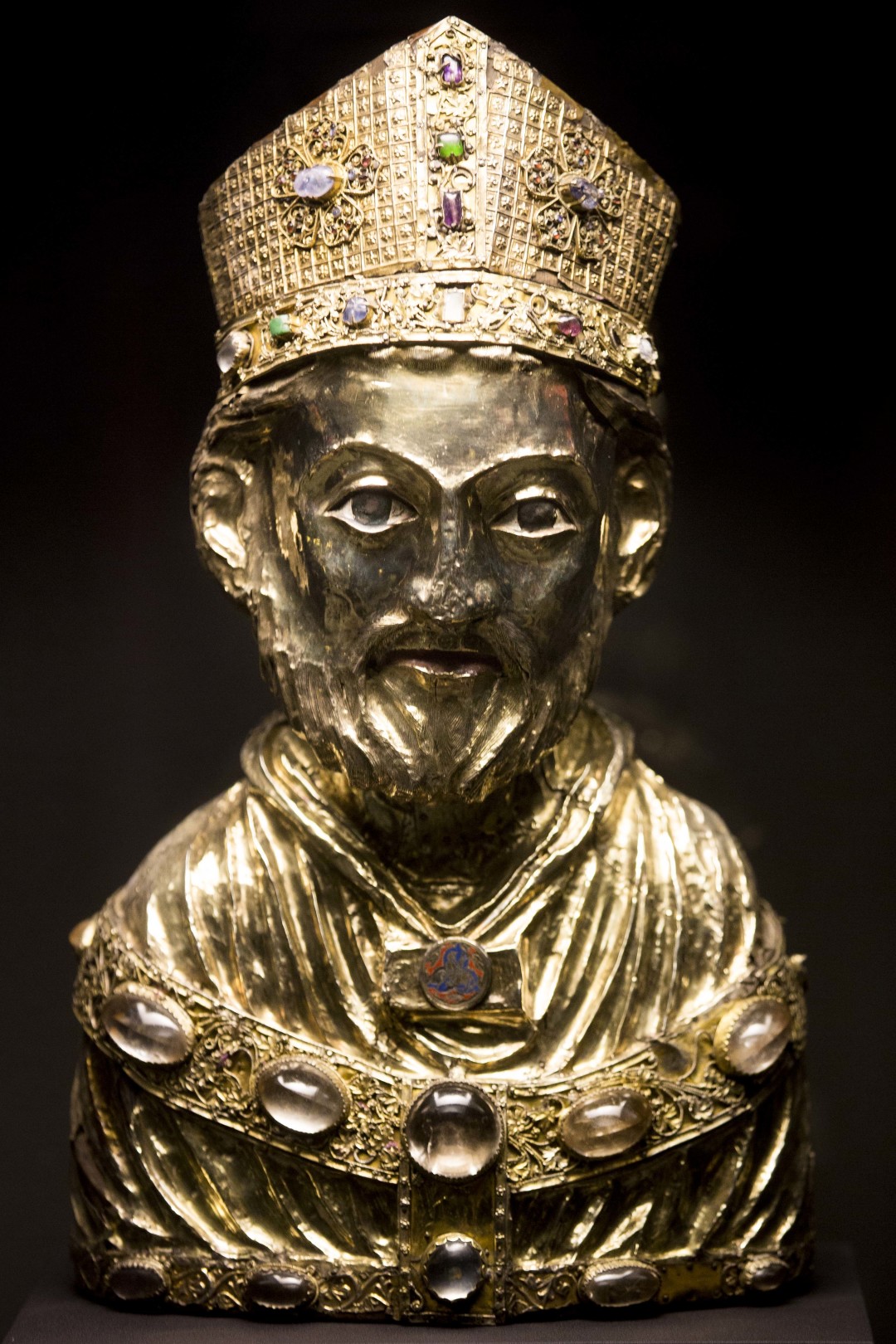 A medieval bust of St. Blaise, part of the Guelph Treasure, is displayed at the Bode Museum in Berlin

That decision helped clear the way for the suit against Germany over the Guelph Treasure. Before that, Leiber and this two co-plaintiffs, Alan Philipp and Gerald Stiebel, had filed a claim for recovery in Germany with an advisory commission for the Return of Cultural Property Seized as a Result of Nazi Persecution. The commission, which included several retired German politicians and judges, decided the 1935 sale was the result of a back-and-forth negotiation and “not a compulsory sale due to persecution.” The reduced value reflected the impact of the Great Depression, the commission said.

The heirs then filed suit in federal court in Washington. “It is beyond serious debate that Nazi Germany took property in violation of international law by systematically targeting its Jewish citizens to make their property vulnerable for seizure,” they argued. Again, the D.C. Circuit Court agreed and refused Germany’s claim of immunity.

But in a dissent widely cited, Judge Gregory Katsas, a Trump appointee, warned against opening the U.S. courts to resolve historic foreign disputes.

“Imagine how the United States would react if a European trial court undertook to adjudicate a claim for tens of billions of dollars for property losses suffered by a class of American victims of slavery or systemic racial discrimination,” he said.

When Germany and Hungary filed appeal petitions before the Supreme Court, the Trump administration advised the justices to hear the cases and is now urging the court to throw out the suits from both sets of plaintiffs. It is customary for government lawyers to argue in favor of sovereign immunity because the principle also protects the U.S. government from being sued in foreign courts.

But the administration lawyers raised eyebrows by arguing that Holocaust-era seizures of Jewish property were “domestic takings” that were off limits to U.S. law. “The expropriation exception in FISA does not provide jurisdiction in any case involving a domestic taking,” acting Solicitor Gen. Jeffrey Wall advised the court. The rule allowing suits over looted property “is concerned with a state’s treatment of the property of foreign nationals, and not with the treatment of the property of its own citizens.”

He also disagreed with the D.C. Circuit’s view that acts of genocide called for a different result. The “expropriation exception does not cover domestic takings, even when they occur as part of a genocide or other human rights violation,” he wrote.

Boston attorney Nicholas O’Donnell who represents the heirs called the administration’s argument “deeply disappointing” and contrary to the position of the United States since the end of World War II. “The Nazi regime stripped German Jews of the protection of the rule of law from the moment Hitler took power and declared explicitly that Jews were not ‘German.’” he said.

Germany has relied on the domestic taking defense. The theory of sovereign immunity adopted by Congress means “states are immune for sovereign acts, such as takings of property within their own borders,” lawyers for the Federal Republic of Germany told the court.

They also disputed the link to genocide. The heirs “do not allege genocidal acts here. Instead they allege that a consortium of Jewish-owned art dealerships sold medieval artifacts stored in Amsterdam for less than market value in 1935. The property at issue was not essential property, like food, medicine or shelter but an art collection. Prussia bought the collection not to cause anyone’s death, but because the Welfenschatz was ‘historically, artistically and national-politically valuable’ to Germany,” they wrote.

Those passages drew a sharp rebuke from the National Jewish Commission on Law and Public Affairs. In a court brief, it called Germany’s defense an “astounding demonstration of gross insensitivity and arrogance.” Holocaust historians in a friend-of-the-court submission told the justices that from the time Hitler took power in 1933, Jews in Nazi Germany were “treated increasingly as aliens and strangers in their own land,” and they were unable to protect their rights in court.

“No sale of Jewish property under the Nazi regime was voluntary in the sense of a freely negotiated contract in a free society,” the historians said.

Jonathan Petropoulos, a historian and expert on Nazi art who teaches at Claremont McKenna College in California, said U.S. courts may provide heirs with their only chance for justice. “The European legal system does not accommodate civil litigation to recover Nazi looted art,” he said. “So those of us in the restitution field truly rely on U.S. courts to resolve these Holocaust-era claims. It would be unfortunate if the Supreme Court issued a ruling that made it even more difficult for claimants.”

Probably the most famous case of Nazi art to reach the Supreme Court arose when Maria Altmann sued to recover Gustav Klimt’s gold-toned painting of her aunt, Adele Bloch-Bauer. Altmann had fled Vienna as a young woman in 1938 when the Nazis took control. She settled in Los Angeles. In 1998, she set out to recover the painting and four other Klimt works that she believed had been deeded to her by her uncle.

However, the paintings had been on display for decades in the Austrian National Gallery, and an advisory committee considered her claim and turned it down.

Her lawyer E. Randol Schoenberg, tried what looked to be a long shot. He sued Austria in a federal court in Los Angeles. He won there and in the 9th Circuit appeals court, and in 2004 the Supreme Court refused to dismiss the case based on Austria’s claim of sovereign immunity.

The court called its decision “extremely narrow.” It did not decide whether the state’s seizure of the painting was an illegal “expropriation” under international law. But the ruling allowed her suit to proceed. Before the case could be tried in Los Angeles, the government of Austria agreed to arbitrate her claims, and the panel agreed to return the paintings, including “The Lady in Gold,” in 2006.

Altmann sold them to Ronald Lauder, who put them on display in the Neue Gallery in New York in 2015, four years after Altmann had died in Los Angeles. But the display coincided with the release of the film “Woman in Gold,” in which Helen Mirren portrayed Altman and her long struggle to reclaim her family’s property.

Like Altmann, the heirs of the Guelph Treasure cannot win their claims in the Supreme Court. They too are seeking the right to have their claim of “expropriation” decided in federal court if the justices reject Germany’s claim of immunity.

The justices will hear arguments on Monday in both cases: Republic of Hungary vs. Simon and Federal Republic of Germany vs. Philipp.