Whether it’s stamps or exquisite objects, collectors get pleasure from the possession, uniqueness, aesthetic factors or sense of history the pieces give them.

The following, however, is the story of a rare instance of a collector – particularly someone who curates or runs a museum – thinking about whether an acquired piece should rightly be in his possession.

Provenance can verify the authenticity of a piece. It also can verify how a piece changed hands and how it got to where it is now. In court cases, provenance can help determine who is the rightful owner of a piece of art. 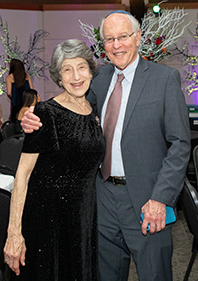 Dr. Daniel Musher is a collector of Judaica and head of the Museum Committee at The Mollie and Louis Kaplan Museum of Judaica. The Kaplan Museum houses some 750 objects and is located at Congregation Beth Yeshurun.

In 2019, Musher acquired a rare silver tzedakah plate, made in 1825 for the Chevra Kadisha (burial society) of Bucharest, Romania. Musher purchased the plate on behalf of the museum from a New York auction house that specializes in Judaica.

Except for the Hebrew lettering declaring that the tzedakah plate was made for the Bucharest Chevra Kadisha, there is no indication of provenance (history of ownership) anywhere on the plate. 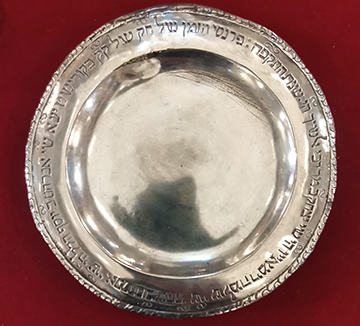 Who is the rightful owner of this tzedakah plate?

Musher addressed the problem of ownership with close friend and former college roommate, Tom Freudenheim. A former executive director at the YIVO Institute for Jewish Research and director at the Baltimore Museum of Art, Freudenheim is a strong advocate for the return of stolen art objects whenever they can be identified. He is an expert on what museums should do about works in their collection that may have been acquired through looting or forced sale.

This spring, May 6, Musher’s colleague, Dr. Cezarina Mindru, personally returned the plate to the small but active Jewish community of Bucharest. She returned an important ritual object to the Jewish community from which it presumably was looted or stolen.

Tzedakah boxes, or pushkes, have long been a major means of financial solicitation in the Jewish community. Rabbi Moses b. Jacob of Coucy (13th century) said that when he visited Spain, he saw the charity wardens making the rounds daily with tzedakah boxes and then distributing the proceeds on Fridays.

Tzedakah boxes and plates were circulated in homes, in the synagogue on the eve of major holidays, in the cemetery or wherever the community assembled.

During the 16th century, the institution of the Jewish Burial Society evolved and became the most influential among the community associations. The society supervised the local cemetery, performed the burial rites and became a major philanthropic agency.

Beginning with the rise in power of Adolph Hitler in 1933, a modern European state was able to carry out the systematic murder of an entire people for no other reason than they were Jews. Beginning in April 1933, the Nazi government passed and enacted the first of some 400 anti-Jewish laws. These laws began with the elimination of Jews from civil service in Germany. And later, these laws led to the planned elimination of the Jewish people.

Today, we still don’t have a firm grasp of the amount of art looted from European Jews during that era.

“A lot of this material came on the market in the 1920s,” Freudenheim told the JHV. “People in the community were selling things before Hitler. The tzedakah plate may well be stolen property. But, we don’t know if that is the case.”

Prior to the war, Romania had an estimated Jewish population of some 600,00. After a Fascist coup in September 1940, some 120,000 German troops entered Romania as “military advisors.” Under General Ion Antonescu and the Iron Guard, some 80 anti-Jewish laws were passed, including legislation that provided for the “Romanization” of Jewish property. Some 147,000 Jews were deported to Transnistria, an area conquered by the Axis powers from the Soviet Union during Operation Barbarosa. In sum, an estimated 50% of Romanian Jewry was annihilated.

In 1998, Freudenheim penned an important article in Artnews, in which he wrote: “No one would disagree that restitution should be made when there is compelling evidence of Nazi theft. But sometimes, the surviving evidence is inconclusive and people who purchased in good faith art that previously changed hands without provenance have the right to be heard. … Holocaust-related art restitution was becoming a playground for ambitious politicians, hungry lawyers and sleuthing journalists.

“I fear a new era of witch hunts, in which individual profit motives overtake our understanding of the real issue: the massacre of millions of human beings. …What happened to those millions can never be made good.”

Over the course of conversations, Freudenheim suggested that Musher find out if there was an active Jewish museum or a Chevrah Kadisha in Bucharest. Musher learned there was and reached out to them.

Freudenheim told Musher: If somebody has something and they know who the previous owner was, they should return it to the owner.

The two concurred that the piece should be returned if the Jewish Bucharest community existed and had either a burial society to use the plate or a museum to display it.

Freudenheim noted that the Talmud contains an extensive discussion of the return of lost property. To simplify: Jewish law compels a person to affirmatively act when he encounters lost property.

During the Holocaust, more than major paintings, major (and minor) collections of silver, porcelain, stamps, coins and books were looted from homes and families. These objects now are finding their way into institutional and private holdings.

“That’s a big issue,” Freudenheim told the JHV. “Nobody is interested in the hundreds of thousands of objects like these. The Washington Principles on Nazi-Confiscated Art are nice, but they don’t deal with the massive amount of materials that are in private and museum collections.

“The Kaplan Museum’s return of the tzedakah plate is a rare example of somebody caring enough to do the right thing, even though the museum is absorbing the costs that it took to acquire the plate.”

When Musher ascertained that the Jewish community in Bucharest was small, but active, and had a museum, he arranged for Mindru to transport it on her next visit to Romania.

“Sending a rare antique silver plate by international mail is problematic,” said Musher. “Cezarina happened to be going to Romania, where she was born.”

Mindru told the JHV that objects of high value, including objects from non-Jewish Romanian folk culture, often are for sale.

“Daniel asked me to take the piece to the Jewish Museum in Bucharest. The museum is located in the former Templul Unirea Sfântâ synagogue, which survived World War II.

“I left Romania 23 years ago. I had never visited that part of the city where the synagogue is located. At the museum, I met a charming docent who gave me a tour so I could learn about the history of the Jewish community. The museum held a formal ceremony to mark the acquisition. The museum didn’t have many ritual objects on display.

“I was impressed by the desire to rescue the plate. The act of restitution was a selfless act. It gives me some hope that the world isn’t crazy and things can be made whole.”