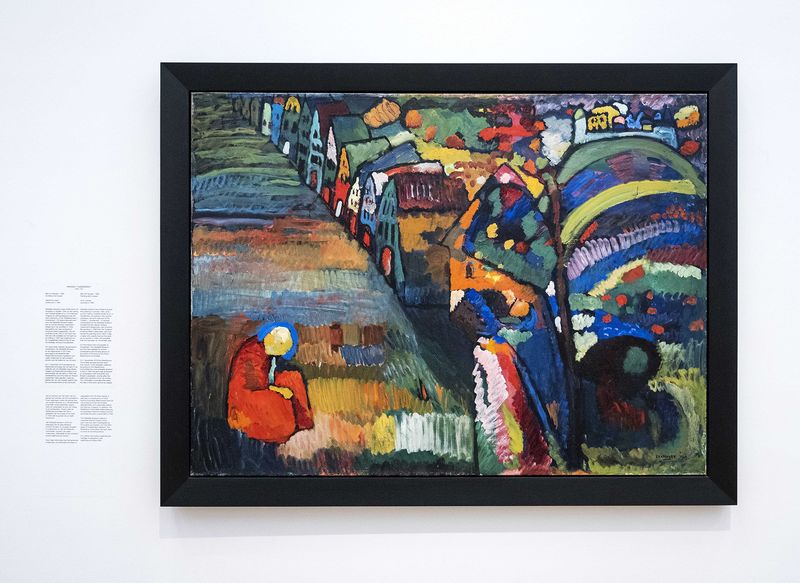 “Painting with Houses” by Russian painter Wassily Kandinsky on display in the Stedelijk Museum in Amsterdam.

The Hague, Netherlands (AP) -- Amsterdam says it will return a valuable painting by Wassily Kandinsky to the heirs of a Jewish family that originally owned it, ending years of legal wrangling over the work that was sold at auction in 1940.

“This is a historic injustice that is being put right,” Simon van der Sluijs, a lawyer who has represented the heirs, said Friday.

Amsterdam municipality said in a statement that it will return the 1909 work, "Painting With Houses," without a new ruling by the Dutch restitution committee that deals with claims of looted art due to “the long duration of the process and the importance of correcting wrongs of the past.”

“The family is happy,” he said.

A court in Amsterdam last year upheld a 2018 ruling by the restitution committee that the artwork, which Amsterdam municipality bought at an auction in 1940, did not have to be returned to the heirs of the Lewenstein family that owned it before the brutal Nazi occupation of the Netherlands during World War II.

The 2018 ruling said the painting was not stolen or confiscated before it was auctioned, but also stated that the sale “cannot on the one hand be considered in isolation from the Nazi regime, but on the other hand has to have been caused to an extent by the deteriorating financial circumstances” of the original owners before Nazi Germany invaded and occupied the Netherlands.

Amsterdam's municipality said in its statement announcing the return of the painting: “We have a history as a city and with it comes a great responsibility for dealing with the injustice and irreparable suffering inflicted on the Jewish population during (World War II).”

James Palmer, founder of the Mondex Corporation that works with people including the Lewenstein heirs to reclaim looted art, hailed a “courageous decision.”

In an email to The Associated Press, he said it recognizes "that the property rights of the claimants are fundamental in a democracy regardless of a museum’s interest in retaining such property.”

The municipality said it has a “moral obligation to act in accordance with this responsibility. The city stands for a fair and clear restitution policy, returning as much looted art as possible to the rightful owners or the heirs of the owners.”

Amsterdam said that under new Dutch guidelines for dealing with looted art the Kandinsky would likely be ordered returned to the heirs.

“The College of Mayor and Alderpersons has therefore started consultations with the heirs to reach a settlement agreement, after which the artwork ... can be returned immediately to the rightful owners,” the statement said.

Palmer said the decision will have a broader impact for heirs seeking to reclaim looted art as it “clearly disposes with the flawed approach of the balance of interest test which effectively placed the rights of the museum to display stolen property ahead of the rights of the property owners to enjoy their property and if they choose to sell, lend or display such art in the museums of their choice.”