Ori Z. Soltes teaches at Georgetown University. He is a co-founding director of the Holocaust Art Restitution Project and the author of “The Ashen Rainbow: Essays on the Arts and the Holocaust,” among other books. 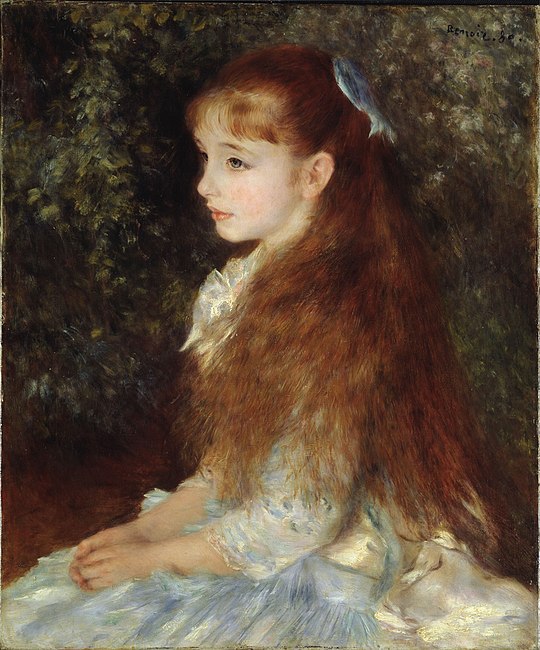 A portrait by Pierre-Auguste Renoir of Irene Cahen d’Anvers, painted in 1880. It was looted by the Nazis in 1941.

One might suppose that the last page has been turned on the narrative of the Holocaust — and certainly of the chapter dealing with Nazi-plundered cultural property — and then something appears that adds another substantial paragraph.

Two recent books do precisely that by way of two very different stories: James McAuley’s “The House of Fragile Things: Jewish Art Collectors and the Fall of France” and Pauline Baer de Perignon’s “The Vanished Collection.”

McAuley’s deeply researched and elegantly written volume plunges into the expansive efforts of a group of successful Jewish families in 19th-century France to shape their place within French cultural identity. These efforts played out against a backdrop of relentless antisemitism. Despite the 1789 revolution’s declarations of equality, some of the key mouthpieces for France’s sense of self refused to accept Jews as truly French, regardless of what they contributed to the national ethos.

McAuley, a Washington Post Global Opinions columnist, explores families — the Rothschilds, Ephrussis, Reinachs, Camondos, Cahen d’Anvers, et al — and the extraordinary art and artifact collections that they amassed, the opulent homes that they created as settings for those collections, and their eventual deeding of those structures and their contents to their beloved France. In counterpoint, he recounts the commentaries by vicious critics like the Goncourt brothers and, above all, the journalist Edouard Drumont — the “pope of antisemitism” — expressing contempt for these individuals, at whose homes they nonetheless frequently partied.

McAuley’s text is not simply focused on dueling sensibilities. He provides an astute and perceptive analysis of each Jewish family and its key figures, and reflects on how we ultimately know little about them beyond their possessions. His account resonates with an appreciation of the paradoxes defining their place in a multicolored if flawed tapestry — and the psychological issues that motivated them.

Above all, he delineates their struggle to present themselves as champions of France. They embraced the revolution’s position regarding universalism — and thus the unequivocal compatibility of being French and being Jewish, despite France’s failures to live up to those assertions. The narrative threads its way to the culminating catastrophe for these and virtually all Jewish families in France and across Europe: the Holocaust.

There is irony in the fact that in 1935, two of the major cultural donations to France — 18th-century-style villas filled with 18th-century objects, one left in his will by Moise Camondo and the other donated by his brother-in-law, Charles Cahen d’Anvers — were immediately met with ecstatic reviews, completely devoid of the antisemitic invective of the previous two generations. For that year, the Nuremberg Race Laws were tightening the Nazi noose around the necks of Jews in Germany, and Nazism was not far from imposing itself on a largely cooperative France.

Among the many quotable lines in McAuley’s volume, one stands out as a concise summary of one of the story’s endings: “By March 1944 . . . the mansion that had once hosted glittering banquets in the fin de siecle, with guests from Marcel Proust to the King of Serbia, now imprisoned sixty Jews,” who would shortly be sent to the French concentration camp Drancy and thence to Auschwitz. Nor is this the only terminus: The epilogue focuses on the moving portrait painted by Pierre-Auguste Renoir in 1880 of Irene Cahen d’Anvers as a beautiful little girl with exuberant light-brown hair and a wistful look in her eye — stolen by the Nazis in 1941.

The painting had belonged to Irene’s daughter, Beatrice, whom Irene had abandoned when she divorced her husband in 1902, also abandoning her Judaism for Catholicism. Beatrice perished at Auschwitz, and Irene — who survived the war hiding in Paris — was able to assert a claim and gain possession of the painting in 1946. But in 1949 she sold it to Emil Bührle, a notorious Swiss collector whose wealth derived largely from selling armaments to the Nazis.

McAuley’s nuanced narrative leaves the reader with a range of villains from which to choose, the handful of heroes mostly turned to ashes, like the unique world they shaped — except for the lush array of objects and museums left to be enjoyed by “la patrie,” the fatherland.

Pauline Baer de Perignon grew up in la patrie as a Catholic. Her engrossing “The Vanished Collection” began by happenstance: a passing comment from a cousin engaged in the art world, followed by a piece of paper on which he had written the names of a handful of works by great masters that had once belonged to her great-grandfather and that, her cousin noted, had probably been stolen from him.

The book reads like a detective story; two main issues shape its narrative. One is the story of that great-grandfather, Jules Strauss, well known for his generous contributions of exquisite frames for a number of the masterpieces in the Louvre. Strauss was dispossessed of his cultural property, a fact that was conveniently obliterated from the communal memory of the French cultural world after World War II.

The other is the process through which, gradually, the author came to understand what had happened to her great-grandfather’s collections and came to a deeper understanding of her family identity and heritage.

Strauss, we learn, while directing modest efforts toward building his own art collection, devoted enormous energy to the Louvre frames: He instituted the very idea of taking the framing of paintings seriously. Yet Strauss also possessed interesting and valuable works of art — such as a small drawing by Tiepolo that ended up in the collections of the Louvre, and an intriguing painting by Largilliere, “Portrait of a Lady as Pomona,” which ended up in the Old Masters Picture Gallery in Dresden, Germany.

Baer de Perignon’s narrative evolves toward a realization that these works did not make the journey from Strauss’s walls to the storage facilities of these museums along a legitimate path but as part of the typically unstraightforward process of cultural-artifact depredation in which the Nazis were so skilled. Among the ironic — or galling — aspects of the Strauss story was that his home, 60 Avenue Foch, also confiscated by the regime, was requisitioned by senior members of the SS who specialized in black-market operations and the seizure of Jewish property.

Baer de Perignon’s journey takes interesting turns and twists as she becomes a knowledgeable and comfortable denizen of the archives where she eventually uncovers proof that these works did not leave her great-grandfather’s possession — as the director of the Dresden museum would cynically suggest, during the first round of her attempts to regain her family patrimony — because “Herr Strauss was happy to have sold his painting for a decent price.”

In her quest to reclaim tangible connections to Strauss and her family’s past, she begins to wonder how and why her father and two of his first cousins converted, in 1940, to Catholicism. A whole other aspect of the world of Nazi confiscations emerges for her, regarding layered aspects of her family’s — and her own — religious identity.

She comes to recognize the peculiar and willful amnesia from which her family has been suffering during the two generations since the Holocaust. That amnesia set in after Strauss’s widow, Pauline de Baer Perignon’s great-grandmother, filed several claims with the French government for works of art that the French museum bureaucracy refused to acknowledge had been stolen.

The amnesia for the family involving its heritage, both cultural and spiritual, and the amnesia of the French government and museum world, are part of the larger amnesia from which the Western world has suffered since the Holocaust. Both of these books add important chapters to that narrative and its culture-centered story line. Their ultimate theme is about restoring memory — that most significant feature that makes humans human.