Few people have done more to advance the cause of people seeking to recover property lost to the Nazis in World War II than Stuart E Eizenstat. 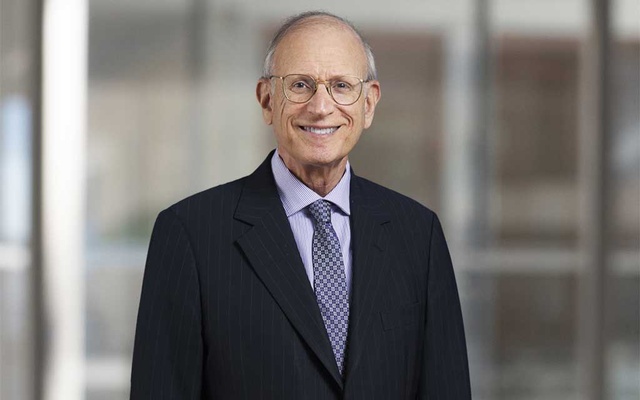 Stuart E Eizenstat, who helped set the policies for the just settling of restitution claims as a diplomat, is now involved in his first claims case as a lawyer.

As a diplomat and lawyer, Eizenstat, 79, has advised five US administrations, including that of President Joe Biden, on Holocaust issues. He has negotiated with European governments and companies, recovering more than $8 billion for Holocaust survivors and families, and helped write the landmark Washington Principles on returning looted art, a treaty now used around the world to “expeditiously” promote “just and fair solutions” to restitution claims.

“No self-respecting government, art dealer, private collector, museum or auction house should trade in or possess art stolen by the Nazis,” Eizenstat said in an essay in 2019.

But, as a lawyer, Eizenstat had never gotten involved in an individual restitution case. That changed a few months ago when he agreed to help a childhood friend whose family is being sued by the heirs of a Jewish couple whose art collection was seized by the Nazis.

Since 2015, relatives of Ludwig and Margret Kainer have pursued a claim for a painting by Camille Pissarro, the impressionist master, that was once a part of the Kainers’ collection. In May, the heirs sued the family of Gerald D. Horowitz, and in the ensuing weeks Eizenstat, a childhood friend of Horowitz’s wife, Pearlann Horowitz, agreed to work on the family’s behalf.

“Different claims to artworks that changed hands during World War II have different merits; some are clear cut, and some are not,” Eizenstat said in a statement to The New York Times last week. “Our investigation of the historical facts concerning this painting has convinced us that this is less than a clear-cut claim that raises complex historical questions and includes contradictory information.”

Eizenstat said Gerald Horowitz, who bought the painting from a New York dealer in 1995, had acted in good faith, without any sense there was a cloud on its title. He said his efforts to reach an amicable settlement were in keeping with his life’s work and that both sides had reached an agreement in principle.

“I believed,” he said in his statement, “I was particularly qualified to undertake the task of finding a ‘just and fair solution’ to both sides, as contemplated by the Washington Principles of which I was a principal negotiator.”

Though Eizenstat’s clients are Jewish, the optics of his surfacing for the first time in a restitution case, not on the side of claimants, but of defendants, have surprised some experts in the field.

“I think it’s unusual that he is showing such limited support for the claimants,” said Lynn H. Nicholas, a historian and expert on Nazi looting whose 1994 book, “The Rape of Europa,” is credited with drawing attention to the scope of the issuE “But I don’t know all the details, and he may have good reason.”

The painting, “The Anse des Pilotes, Le Havre,” an oil on canvas work from 1903, depicts a harbour scene and was part of the Kainers’ collection when the couple left Germany in 1932, eventually settling in France, according to court papers. Unable as Jews to safely return after the Nazis grabbed power, the Kainers stayed away, and in their absence, their world-class art collection and other furnishings were seized by the Berlin tax office, according to the suit filed in federal court in Georgia by 15 Kainer heirs.

In 1935, more than 400 Kainer possessions, including the Pissarro and 31 other paintings, were sold at auction in Berlin, the suit says, to pay a Reich flight tax, a financial instrument that was often used to punish Jews who fled the country. In 1963, a German appeals court ruled that the tax levied on the Kainers had been discriminatory, according to James Palmer, founder of Mondex Corp., a company that pursues restitution claims and is representing the Kainer heirs. In addition, the Kainer heirs have a page from the 1935 auction catalogue that references the painting.

The painting’s path for the next 60 years is not completely clear, though it was owned for some time, Palmer said, by a German industrialist who had bought it at the auction.

In 1995, Horowitz purchased it from Achim Moeller Fine Art in New York, but only after checking with a respected database that tracks looted art. The painting was not listed.

In 2014, the Horowitz family lent the work for display at the High Museum of Art in Atlanta, around which time it was identified by Mondex, which was already working with the Kainer heirs. The Kainers had died in the 1960s without children, and their current heirs claiming the painting are the children and grandchildren of cousins.

The heirs sought restitution of the painting in 2015 and presented the Horowitz family with evidence that, by 2005, the painting had been listed in the Pissarro catalog raisonné as plundered “from L. Kainer,” according to the court papers.

But Palmer said the Horowitzes did not want to move forward with discussions because they were uncertain about who were the rightful heirs. (At the time, a foundation created by Swiss bank officials had been established to serve as the heirs to the Kainers and Margret’s father. But in 2015, a German court found that the Kainer relatives, not the foundation, were the couple’s true heirs.)

More recently, the Kainer relatives have presented additional evidence to support their claim, according to their court papers, including documents showing the Kainer couple had registered the work as looted with the French Department of Reparations and Restitutions, which published a record of the work, along with a photograph, in 1949.

And auction houses have treated several other paintings from the Kainers’ collection that had been sold alongside the Pissarro in 1935 as looted property. In 2009, for example, Christie’s sold Edgar Degas’ “Danseuses,” once owned by the Kainers, for nearly $11 million under the terms of a restitution agreement. (At the time, the agreement recognized the Swiss foundation, not the relatives, as the heirs.)

Eizenstat began advising the Horowitzes sometime after the Kainer heirs took their claim to court in the spring, according to Palmer, and is helping out the lawyer on the case, Joseph A. Patella.

Palmer said he was a little intimidated when Eizenstat joined the negotiations, which are being led by the Kainer heirs’ lawyer, Jason Carter, grandson of former President Jimmy Carter.

Eizenstat worked in the Carter administration as chief domestic policy adviser and served as deputy secretary of the Treasury in the Clinton administration. His numerous awards include France’s Legion of Honor. Last year, the US Holocaust Memorial Museum awarded him its highest honour for working “tirelessly to secure a measure of justice for Holocaust survivors.”

“He is dealing with governments and policy and dealing on a much wider macro level,” Palmer said, “so for him to be involved in a very personal level, it was a surprise.”

Eizenstat said in his statement that he joined the effort in part because Gerald Horowitz is suffering from Alzheimer’s disease and unable to defend himself.

“The Horowitz family are pillars of the Atlanta Jewish and secular community, with a sterling record of philanthropic support for a wide variety of charitable organisations, including the Atlanta Holocaust Survivor Support Fund,” Eizenstat said in the statement.

One sticking point in the negotiations, Eizenstat said, had been that Ludwig Kainer “appears to have made knowingly false claims about the circumstances of the alleged confiscation of the Pissarro, and had full knowledge of who possessed it after the war.”

He did not say what those false claims were. However, Palmer acknowledged that Ludwig Kainer had misled French authorities around the time he first filed his claim by reporting that the painting had been lost in France. Palmer defended Kainer’s decision, saying that at the time Kainer couldn’t afford a lawyer to file a claim in Germany and didn’t believe he would receive justice there. He also didn’t know the painting’s location, which Palmer said was required to file a claim with German authorities.

Though the negotiations appear to have been successful, there were some bumps in the road. Last week, before an agreement was reached, Eizenstat had said the settlement talks with Carter had been “advancing in a productive manner until this shocking breach of trust and improper conduct by Mondex, making sensational allegations to the press about confidential settlement negotiations.”

Eizenstat also took note in his statement that Mondex is a for-profit company, saying, “It is well known that Mondex acts and receives compensation from the Holocaust claims of others.”

Palmer said that some portion of the fees the company collects must go toward covering costs it incurs in pursuing restitution claims, “which we do with passion and pride.”

He said that there had been no agreement to maintain any confidentiality about the talks. “Certainly a ‘just and fair’ solution requires candour and transparency,” Palmer said. But, he said, more important is that the agreement in principle “is a very productive result for all of the parties involved.”

Palmer added that during the negotiations he had told Eizenstat it was an honour to work with him. “I told him that we would not have been in existence if not for him, so I thanked him,” he said. “I am very cognizant of the contribution he has made to the rest of the world.”