Culture Minister Bachelot hails ‘historic’ bill; Senate approval still needed; among pieces to be returned are a Klimt and a Chagall 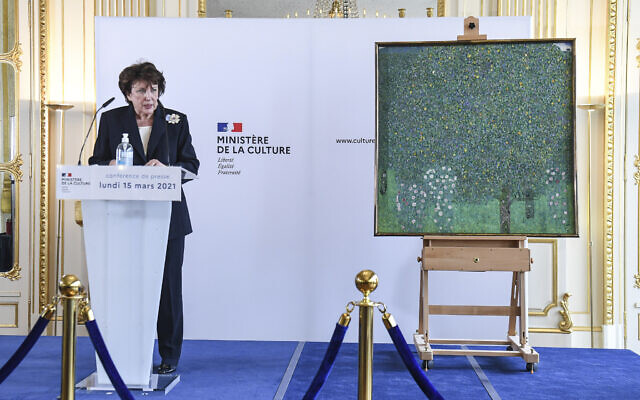 French Culture Minister Roselyne Bachelot poses next to an oil painting by Gustav Klimt painted in 1905 called 'Rosebushes under the Trees,' during a ceremony at the Orsay museum in Paris, March 15, 2021

The French National Assembly unanimously adopted a law to return 15 works of art, including a painting by Gustav Klimt and one by Marc Chagall, to the beneficiaries of Jewish families looted by the Nazis.

Culture Minister Roselyne Bachelot welcomed the passing of the “historic” bill last Tuesday, which was observed by the artworks’ owners who were present in the gallery.

The development still requires final approval from the Senate, which will vote on the matter on February 15.

Among the 15 works is “Rosiers Under the Trees” by Gustav Klimt, kept at the Musée d’Orsay — the only work by the Austrian painter belonging to the French national collections.