In its holdings the Klassik Stiftung Weimar has identified objects that formerly belonged to the collection of the art historian Dr Heinrich Schwarz, who was persecuted by the National Socialist regime. A drawing and two prints could now be restituted to his heiress. 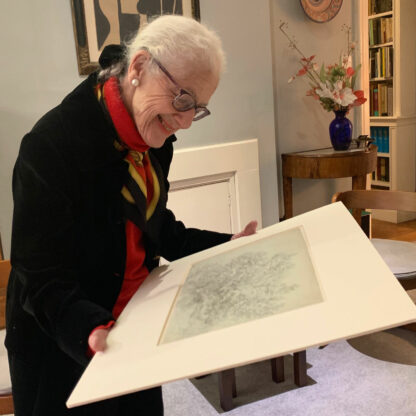 Heiress of Nazi-persecuted collector Heinrich Schwarz found in London. Another case of Nazi-looted art at Klassik Stiftung Weimar was successfully resolved, with two prints and a drawing restituted to the heiress of the Austrian-American art historian Dr Heinrich Schwarz.

In the course of their systematic investigation of accessions of the Goethe National Museum (GNM) during the period from 1933 to 1945, the provenance researchers of the Klassik Stiftung came across an entry in the museum’s accession ledger: on March 4, 1942, the GNM purchased two engravings via the art dealer and antiquarian Lothar Hempe. The two prints depicted portraits of contemporaries of Friedrich Schiller based on paintings by Johann Friedrich August Tischbein (1750–1812), also known as the Leipzig Tischbein. 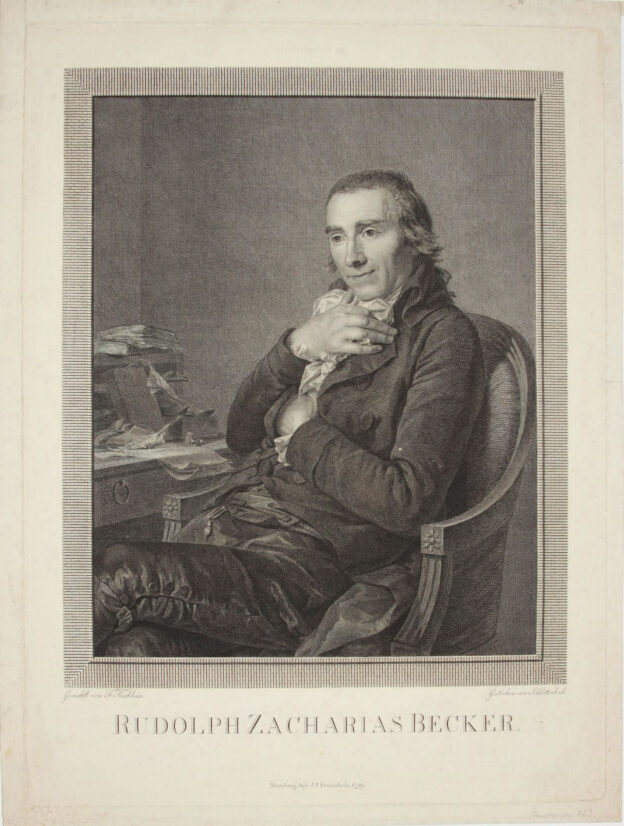 Initially, nothing was known about the provenance of the two engravings. The museum’s archive did not yield any information about the background of the sale to the GNM. The date and the purchase through the antiquarian trade however gave rise to suspicion. 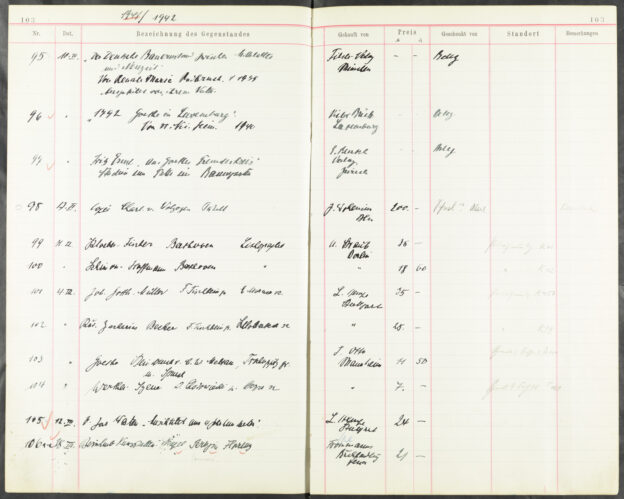 Close inspection of the objects

In a further step, the provenance researchers closely inspected the two engravings. This detailed examination yielded first hints to the former owner. Both prints bore on their reverse a collector’s mark with a simple design of the initials “H.S.”.

In the meantime, another and more outstanding object had attracted attention in the collection of the former Staatliche Kunstsammlungen zu Weimar. The former director of the state museum, Walther Scheidig (1902–1977), had purchased a drawing by the painter and graphic artist Heinrich Reinhold (1788–1825) by auction from the book antiquarian firm of C.G. Boerner in May 1941. Reinhold was part of the so-called Deutschrömer German artist circle (i.e. German Romans), whose members worked mostly in Rome and its surroundings at the beginning of the nineteenth century. Before moving to Italy, while living in Vienna and working with a focus on depicting nature, Reinhold created the sketch of an old tree with broadly overhanging branches, demonstrating his great skill in capturing nature’s features. However, also in the case of this acquisition there were no indications of former owners, neither in the museum’s archive nor in the relevant auction catalogue. 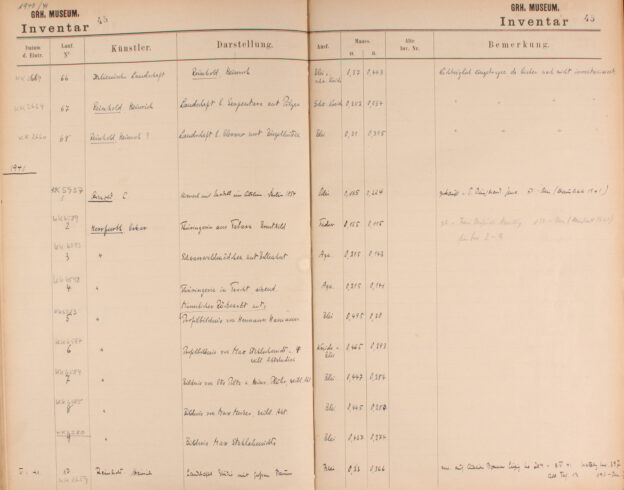 The reverse of the Reinhold drawing however also bore the now known collector’s mark “H.S.”. The question remained: who was the collector behind the mark? Further research revealed that the mark in question was without doubt that of the Austrian art historian Dr Heinrich Schwarz (1894–1974). Heinrich Schwarz had first worked as an unpaid volunteer at the Graphic Art Collection Albertina in Vienna before switching to the Österreichische Galerie Belvedere in 1923, where he curated a large number of exhibitions on nineteenth-century art from 1927 onwards. In these exhibitions, the art historian combined his expertise in graphic art with a lively interest in modern forms of reproduction, becoming an innovator in associating art and technical history. For this reason, he is also considered a pioneer in research on artistic photography. 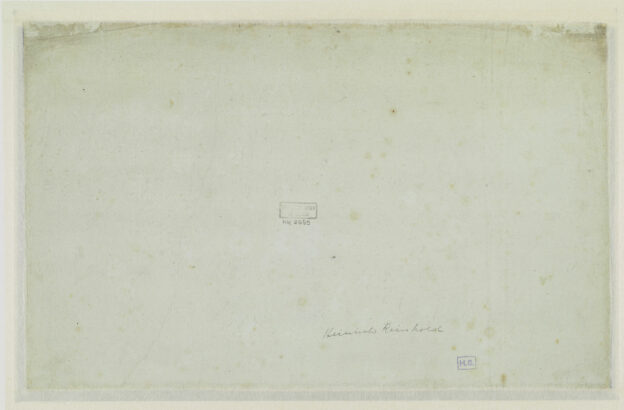 Reverse of the drawing “Landscape study with large tree” by Heinrich Reinhold.

Persecution by the Nazi Regime

Because of Austria’s “Anschluss” to the German Reich in March 1938, Heinrich Schwarz became a target of the Nazi regime. His career ended abruptly: by April 1938, he had already lost his employment due to his Jewish descent, thus his only route to safety was emigration abroad.

Directly after the “Anschluss”, Austria became a testing ground for the Nazi regime. Here began the systematic economic plunder of the Jewish population, in order to force its members to emigrate as soon as possible. Among other measures the National Socialists tried the so-called Passumlage in Austria, a compulsory tax on emigrants, which was also introduced in the “Old Reich” Germany in the following year: it was intended to restrain emigrants, especially Jewish ones, from moving substantial financial and cultural assets abroad.

In addition, Heinrich Schwarz had to submit a so-called declaration of assets to the Nazi authorities. This included, among other information, details of his private art collection comprising paintings, drawings, engravings and photographs. While the exact circumstances are unknown, it is clear that Heinrich Schwarz was forced to flee abroad through the persecution by the Nazi regime and lost his art collection as a consequence.

The Klassik Stiftung Weimar considers the acquisition of the two prints and the one drawing as a seizure of cultural assets due to persecution. In this, the institution follows the Washington Principles of 1998 in seeking just and fair solutions together with the legal successors of the former owners. 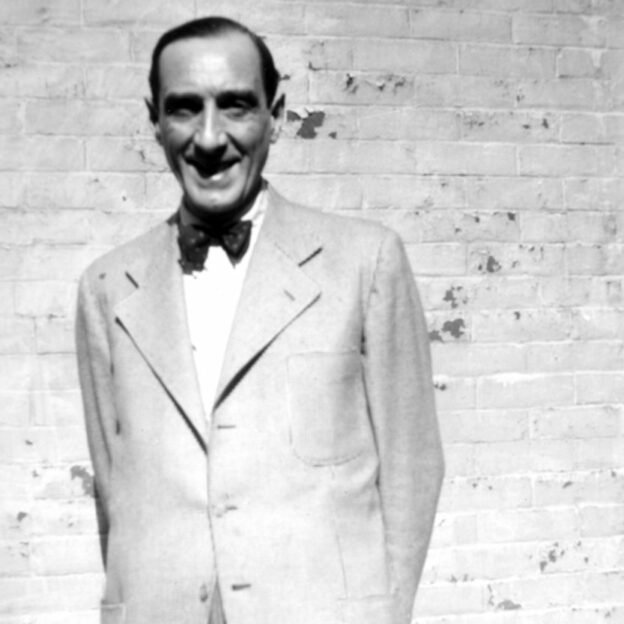 Heinrich Schwarz emigrated in March 1939, first to Sweden and in 1940 ultimately to the US. He initially worked at the Albright Knox Gallery in Buffalo, NY, and in 1943, he became curator of the Museum of Art at the Rhode Island School of Design, one of the most prestigious art schools in the US. From 1954 to his retirement in 1972, he was curator at the Davison Art Center of Wesleyan University, Middletown, CT. Heinrich Schwarz died in New York City in 1974.

Research revealed that Heinrich Schwarz married Elisabeth Arany in 1948. She was Hungarian-born and had emigrated to the US as well. It was possible to locate Schwarz’s will at the probate court in New York; he had left everything to his widow, the couple had no children. Until her death in 2003, his widow lived in New York but died intestate. The search for legal heirs did not produce any results to begin with, since both the widow and her siblings had changed their names through marriage several times.

It was only through the assistance of the Holocaust Claims Processing Office (HCPO) in New York that precise family relationships could be established. The HCPO is a state institution, which mediates between current holders of Nazi-looted cultural assets and claimants. With the support of the HCPO, a niece of Heinrich Schwarz could be located in London. The Klassik Stiftung Weimar made contact with her and agreed that the two prints and one drawing should be restituted. In February 2022, the works were handed over through the London-based Commission for Looted Art in Europe and are now in the possession of the rightful heir.

Since 2010 the Klassik Stiftung Weimar has been investigating its holdings systematically, that is chronologically and across departments, in order to identify cultural property seized as a result of National Socialist persecution (so-called Nazi-looted cultural assets).