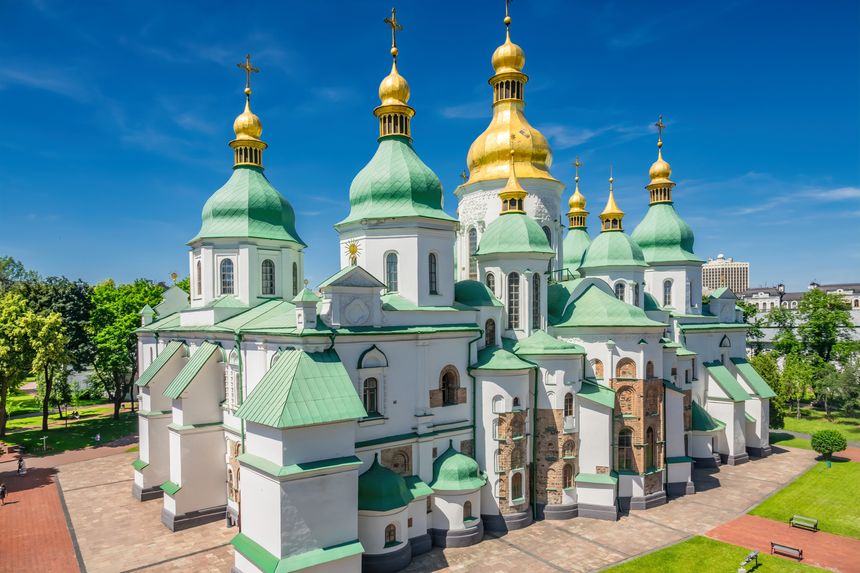 Waking up every morning to the latest news about the Russian invasion of Ukraine is a strange and traumatic experience. The names of cities and towns I hear are woven into the geography of my childhood.

Back then, I often traveled with my father to some of those locations to see churches, crumbling palaces and local museums. They were provincial places, green and dusty, with unavoidable round flower beds in their central squares, immersed in a silence interrupted only by pigeons cooing.

The Russian invasion has put the buildings in many of those places in grave danger. Taken together, those structures—some Unesco World Heritage Sites—represent an irreplaceable architectural heritage, one unique to this region, that dates back to the Middle Ages. Some have already been destroyed. Others almost certainly will have been damaged or leveled altogether by the time this article appears.

Trostianets, a little town roughly 80 miles northwest of Kharkiv, was one of the places we visited. In the 19th century it was the seat of Prince Vasily Petrovich Golitsyn, a provincial member of one of the largest princely houses in czarist Russia. There was a palace on his property, as well as a peculiar building called the Round Yard. Both dated from the 18th century.

Built to look like a medieval castle, the Round Yard was originally a riding facility complete with stables, and later was used for circus and theatrical performances. Trostianets is now under Russian control; who knows if I will ever get to see the buildings again.

I remember not only the little towns of my childhood but my first visit to cities like Kharkiv, for some days now the focus of sustained Russian bombardment. Kharkiv is the Ukrainian capital of Constructivist architecture, a modernist style that flourished in the Soviet Union during the 1920s and 1930s. On that trip I was overwhelmed by the gigantic scale of the Gosprom Building (1928)—the name means “state industry”—located in Freedom Square at the city’s center.

Designed by architects Sergei Serafimov, Samuil Kravets and Mark Felger, Gosprom stands 13 stories tall and was the biggest building in the U.S.S.R. at the time of its completion. Composed of individual towers linked by walkways, and laid out in a broad arc, the building was innovative in both design and construction, particularly its use of concrete—a triumph of Soviet modernity.

For the past several days, Freedom Square has been the target of Russian missiles. They haven’t aimed at Gosprom yet, but the neighboring buildings were hit. The fate of this and other masterpieces of local Constructivist architecture, such as Arkady Mordvinov’s Central Post Office (1928-29), is hanging by a thread.

However, it is not only the modernist architecture of Kharkiv that is in danger of imminent destruction. On Tuesday the Russians announced that their troops will start to bomb all targets associated with the Security Service of Ukraine (SBU). Its headquarters in Kyiv is a stone’s throw from the 11th-century St. Sophia Cathedral, the symbol of the Ukrainian nation. The cathedral is the pre-eminent example of early medieval architecture in Kyiv, which borrowed from Byzantine architecture such features as high domes, rounded arches, spacious interiors and mosaic decoration. The most notable of the last is a gigantic depiction of the “Virgin Orans”—the Virgin Mary standing with her arms extended and looking out at the viewer. Ukrainians interpret it as the image of the Holy Mother as Protectress. The cathedral survived all historical tragedies from the Mongol invasion of 1240 to the Nazi occupation. The question is, can the Virgin protect Ukraine from Vladimir Putin ?

Also in Kyiv are the 12th-century St. Cyril’s Church (part of a monastery complex of the same name), with its murals by the important 19th-century Russian painter Mikhail Vrubel, and the Church of the Saviour at Berestove. Also built in the 12th century, the latter eventually fell into ruins and was rebuilt in the 17th century in the Ukrainian Baroque style, a less flamboyant version of Western European Baroque, and the interior frescoed. A portion of the original structure remains, however, with important medieval frescoes.

There are gigantic monastery complexes on the bank of the Dnieper such as the 11th-century Kyiv Monastery of the Caves, and the nearby Vydubychi Monastery dating from the same time. They include dozens of churches and buildings, decorated with frescoes and icons.

The fate of some important early medieval architectural landmarks outside Kyiv is equally uncertain. Chernihiv, north of the capital near the Belarusianborder is a battlefield. We don’t know yet the fate of the Cathedral of SS. Boris and Gleb, constructed at the beginning of the 12th century, or of the St. Paraskeva Church, built about 100 years later, not to mention the city’s other architectural monuments. The Ukrainian TV channels are broadcasting footage of the night battles—the burning skyline with the dark silhouettes of the churches’ domes.

Today we are witnessing an immense tragedy that is almost impossible to describe. Hundreds of people are dying in the bombed cities, children among them. The black irony is that Russian troops sent by Putin to liberate Ukraine from the “Nazis” are poised to destroy architectural landmarks that were spared during the Nazi occupation of Ukraine during World War II. A Russian attack on a TV tower in Kyiv resulted in an explosion in Babyn Yar—the site where, in September 1941, Nazis killed 33,771 Jews. The Holocaust memorial that stands on the site was damaged. President Volodymyr Zelensky bitterly commented, “What is the point of saying ‘never again’ for 80 years, if the world stays silent when a bomb drops on the same site of Babyn Yar?”

—Mr. Akinsha is an art historian and expert on art expropriated during World War II. Among his books is “Beautiful Loot: The Soviet Plunder of Europe’s Art Treasure” (1995), with Grigorii Kozlov and Sylvia Hochfield.