Art history buffs, eagle-eyed collectors, antiquities experts and members of the public at large are being invited to join the global hunt for a treasure trove of artworks still missing since World War II, with cash rewards of up to $25,000 for useful information. The buy-in is a single deck of cards. 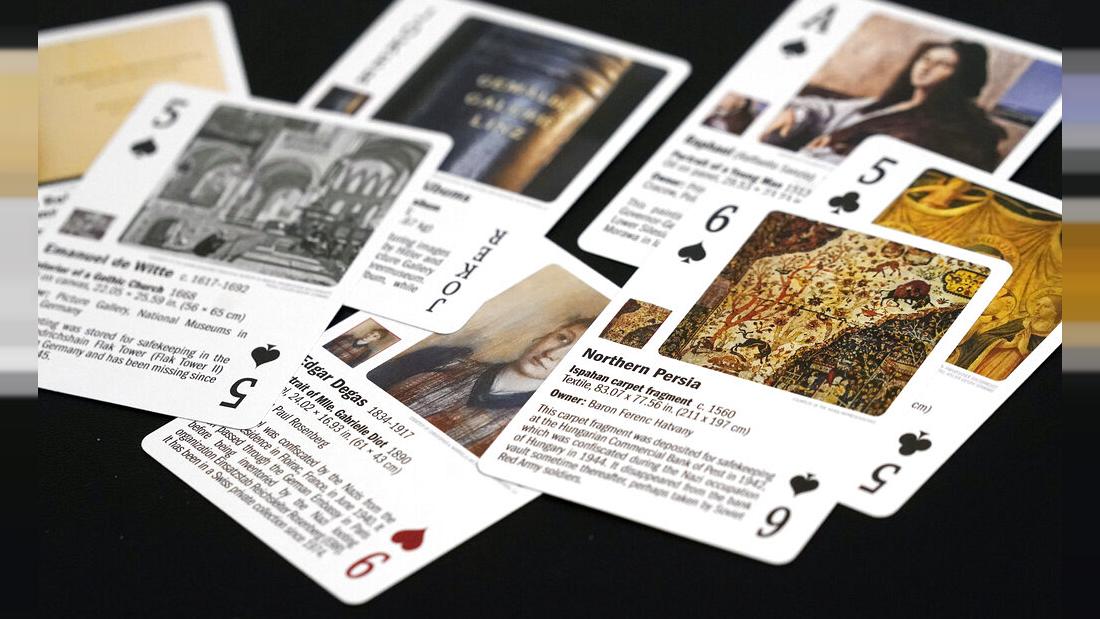 Some of the playing cards featuring works of art lost in World War II created by the Monuments Men Foundation.

Dallas-based non-profit the Monuments Men Foundation for the Preservation of Art has unveiled a set of specially-designed playing cards featuring priceless artefacts that were mostly looted by the Nazis, taken as souvenirs by light-fingered soldiers or subject to forced sales, during the six-year conflict.

The “WWII Most Wanted Art” deck highlights just 52 of the hundreds of thousands of artworks that have yet to be tracked down after what the project’s architects call “the greatest theft in history”.

The purpose of the deck is to highlight the existence of these works, from Van Goghs to Rembrandts to Caravaggios, and encourage people to come forward with information that might lead to their recovery.

The Monuments Men work in close partnership with the FBI and Carabinieri Art Squad in Italy. But instead of involving law enforcement, Monuments Men founder Robert Edsel said, for those who realise they do own looted art “this is a chance for people to do the right thing, to come forward, to address the problem.”

Decades after World War II, priceless creations are still in the wilderness

The original Monuments Men were part of a wider group commissioned by Franklin D. Roosevelt in 1943 in the face of a destructive war and the widespread, systematic sacking of art and artefacts in Nazi-occupied parts of Europe.

Museum curators, scholars and artists, architects and librarians were among the initial 24 who volunteered on the frontlines to locate and recover art during the war. In the last year of the war the Monuments Men recovered hundreds of thousands of stolen objects, followed by a staggering 4,000,000 more in the six years that followed.

But their mission was never completed, prompting the creation of an NGO set up in their name and with the same aim in 2007. The Foundation has since tracked down 30 long-lost masterpieces around the world and reunited them with their legally-recognised owners.

The Most Wanted deck was the brainchild of now-trustee Kevin McGlone, inspired by a U.S. military tradition; decks have been produced featuring most-wanted fugitives from the Iraq War and to help soldiers identify aircraft in World War II.

Foundation president Anna Bottinelli told Euronews: “We thought it would take six months, but in the end it took nearly 24. The more we looked into it, the more we realised the potential for this to be a really ground-breaking concept.

“There are so many artworks missing. Even if we hired every detective in the world, they wouldn’t know where to look. So we have to go the opposite way, and engage the public.”

What's on the cards?

The 52 pieces of art featured in the deck are best construed as highlights, and by no means the sole 'most wanted' items, Bottinelli said. Choosing them was an agonising process, but informed by strict criteria.

“The works included are the ones we have a reason to believe survived the war. We aren’t wasting time on works we believe to have been destroyed. Their whereabouts also had to be unknown; none of them are currently the subject of a court case.”

The Monuments Men worked with law enforcement, museums across Europe and the legal representatives of prospective heirs to draw up the final list.

The cards are being revealed to the public online in a staggered fashion – four a week, for maximum impact. Keen treasure-hunters (and card players) can pre-order a set now for shipping in May. 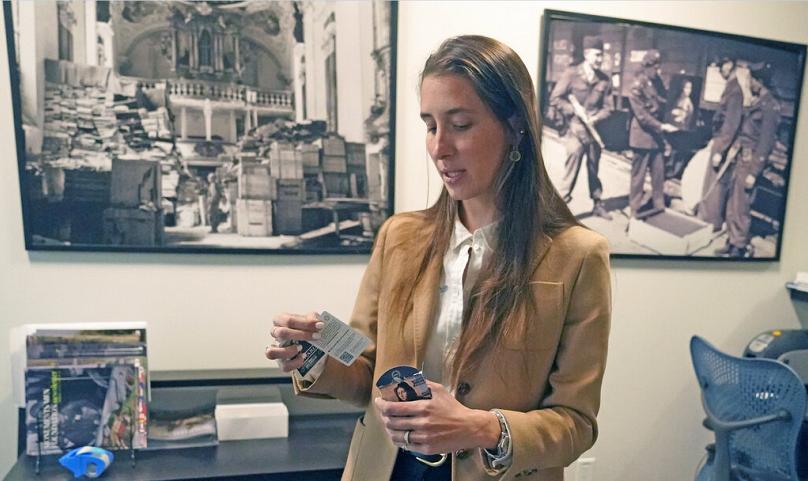 Anna Bottinelli, president of the Monuments Men Foundation for the Preservation of Art, examines the cards at the Foundation's office in Dallas

Among the works featured, though are paintings, drawings and sculptures by Raphael, Degas, Pissarro, Rembrandt, Van Gogh, Emil Nolde, Otto Dix, Caravaggio, Guercino, Cranach the Elder, Canaletto, Memling, Mondrian, Liebermann and Van Dyck. There are also reliquaries, and one fragment of a Persian rug stolen from a bank vault in Hungary.

In total, six of the featured pieces were stolen from Italy between 1943 and 1944. Twelve were 'confiscated' from Jewish art collectors. Eight disappeared from Germany in the closing days of the war. At least eleven are known to have been stolen by the German or Soviet Armies.

Some have resurfaced at points in time since then, including five on the European or US art markets. Six were last known to be in private collections in Russia, Italy, the US and Switzerland. One was last known to be in the possession of a member of the Gurlitt family; Hildebrand Gurlitt, who died in 1956, was one of Hitler and Goering's four authorised dealers of looted “degenerate art”.

So far the Foundation has revealed the content of five of the 52 cards. One of them is a pastel by the French impressionist Edgar Degas’, Portrait of Mlle. Gabrielle Diot (1890), which was 'confiscated' from the villa of a Jewish former gallery owner in Floirac, France in September 1940. 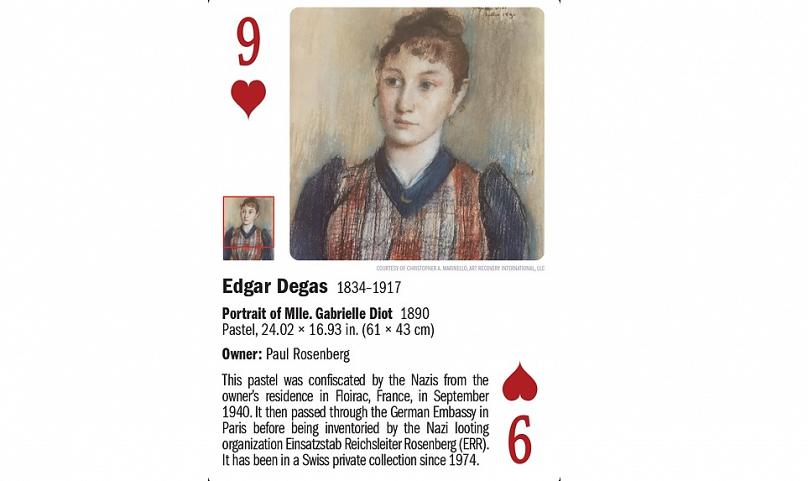 Edgar Degas’ Portrait of Mlle. Gabrielle Diot (1890) was 'confiscated' by Nazis from the Jewish former owner of a Paris gallery

After passing through the German Embassy, the pastel ended up in the hands of the Nazi-looting organisation Einsatzstab Reichsleiter Rosenberg (ERR). It was known to have been sold to a Swiss collector in 1974. But the dealer has refused to disclose their identity.

The others are Jan Brueghel the Elder’s Still Life with Flowers, dating back to the 16th or 17th century, and Emanuel de Witte’s Interior of a Gothic Church (1668), both of which went missing in Germany, as well as Palma il Vecchio’s Virgin and Child With Saints, an even older oil painting removed in late 1943 from the Basilica of Santa Maria del Colle in Pescocostanzo, Italy.

The Foundation has also thrown in two joker cards: each features a set of Nazi photo albums of artwork Hitler once intended for his planned Gemäldegalerie Linz, commonly referred to as the Führermuseum. Eleven parts of the 31-volume set are missing. 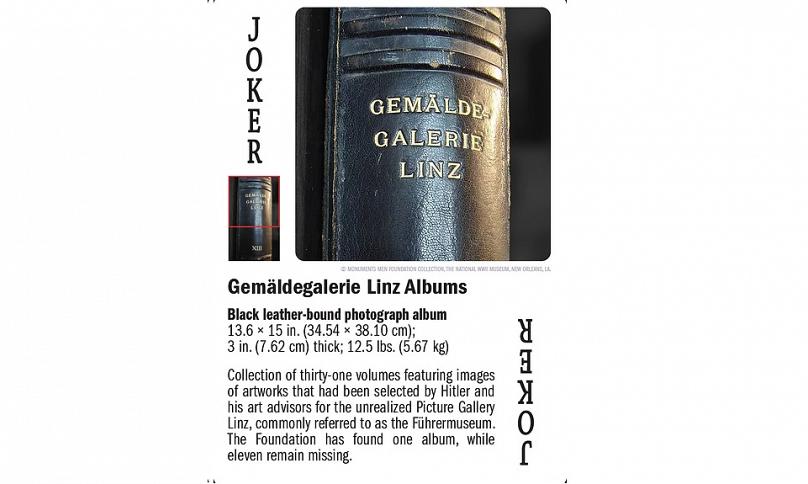 Based on past experience, Bottinelli says, there is a genuine possibility that some people who discover - or are reminded - that they have lost unwillingly sold or stolen artwork in their possession could still come forward.

“It has been heart-warming to see people do the right thing,” she said, “and voluntarily return something, 70 or 80 years later, because they understand that that’s what’s needed to turn the page on a horrible part of our recent history.”

It’s not always the case; some refuse, leading to legal action, which Bottinelli says is a waste of time. “You can have something incredibly valuable. But if it’s not yours, it’s worthless to you.

"You might as well spin it into a positive and give a family some closure by reuniting them with something that might have been in their family for decades. Trials and legal battles don’t serve any purpose other than bleeding both parties.”

The World War II generation is dwindling, meaning with each passing year, it becomes harder and harder to locate these important pieces of history. The card project, Bottinelli said, is “the starting gun of something we hope will be a long, exciting journey. The work is certainly tedious. But If this project leads to the recovery of just a few, it’ll be a great success.“

"What is needed is to raise awareness about what is missing," said Anna Bottinelli, the foundation's president. "Because you might know of a friend who has a beautiful painting on the wall and you don't even question that that painting belongs to someone else."