Bill Leckie, RAF pilot who had a role in daring war-time rescue of looted art

April
The Herald 6 May 2022
By Campbell Thomas 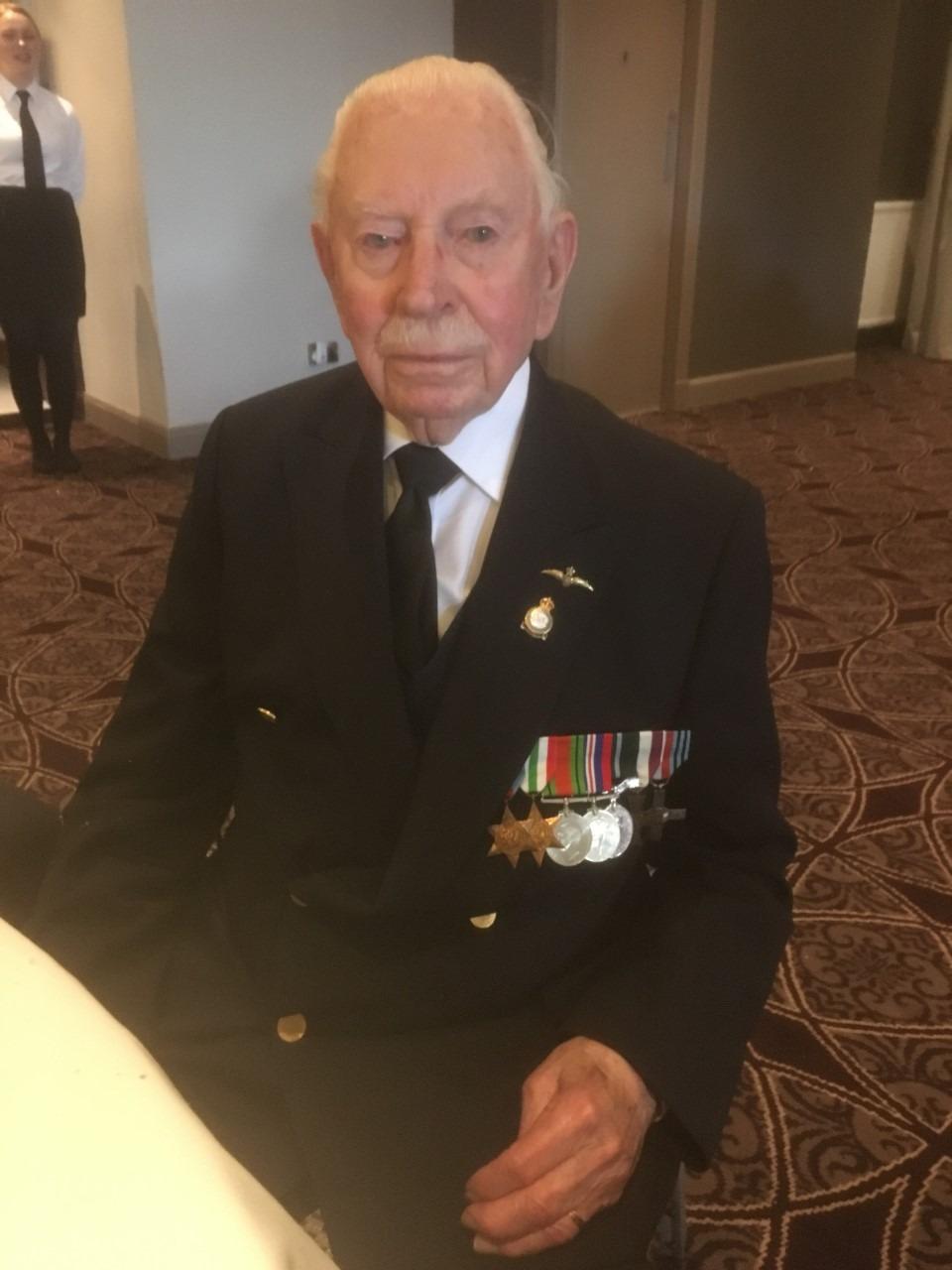 BILL LECKIE was a young RAF bomber pilot in the closing days of the Second World War when he was tasked with flying a mystery group of men to a secret location, where they would parachute behind enemy lines.

Leckie, who has died, aged 100, had no idea the four men were Special Operations Executive (SOE) agents and former enemies, whose task was to help save 1,000 years of looted culture from being lost forever.

The daring exploits to rescue priceless masterpieces from destruction by the Nazis went down in history and inspired the 2014 film The Monuments Men, which was directed by George Clooney and starred him, Matt Damon and Cate Blanchett, amongst others.

But the real-life story of the modest Glaswegian, then 23, who risked his life playing a pivotal role in one of the conflict’s most audacious missions, did not appear in the script.

Had Leckie been captured he faced a deadly fate; Hitler had ordered the summary execution of enemy spies such as the team he was taking deep into hostile territory. He was also at risk of betrayal, as one of the agents hidden behind a black curtain on board his aircraft was a former senior Nazi officer. Double agents were rife at that stage in the war.

The agents’ job was to locate the treasure at all costs and secure it for the arrival of the Monuments, Fine Arts And Archives personnel – the team immortalised in the Hollywood film.

Leckie later recalled: “As pilot and captain of an aircraft about to embark on a Special Duties [SD] mission I was fully briefed, with the exception of learning any details of four persons we had been instructed to drop over a specific dropping zone.

“The only person who saw these agents was the mid-upper gunner, who was trained as a dispatcher and told them when to jump from the aircraft.

“Security was 100 per cent efficient, with no indication of what was going to take place other than fulfilling our particular task to the best of our ability.”

Hitler had issued his infamous Nero Decree; rather than allow assets including the stolen antiquities to fall into Allied hands, they would be destroyed.

The Allies were faced with a race against time to save the 6,755 items of the world’s greatest works of art that had been looted and stored by German forces as they swept across Europe.

In the event of the war being lost, the hoard, packed into a salt-mine deep in the Austrian Alps and including works by Titian, Goya, Rubens, Michelangelo and Rembrandt, would be blown up with explosives.

“To ensure maximum security in line with SD practice, there was no communication between aircrew and SOE agents, other than the dispatcher making them familiar with dropping procedures,” Leckie said later.

At 11.45pm on April 8, 1945, Pilot Officer Leckie took off in Halifax aircraft JP254, codenamed T for Tommy, accompanied by his six-man crew and the SOE team.

“I now wonder what my feelings would have been then if I had known one of my passengers was a former Luftwaffe paymaster who had defected to the French Resistance,” he later reflected. “He was a native of the area to which we were now heading and had discovered from relatives the Nazi plan to conceal massive collections of art treasures in this area, which was well-known to him from childhood.”

The Austrian agents, who were all opposed to the Nazi regime, were trained in using parachutes and their brief on the night was to find out the situation at Altaussee salt mine, organise local resistance groups, and report back to headquarters, code-named Maryland.

The Halifax banked gently and started its run at 800ft to drop the agents’ gear, which floated down to the drop-zone, followed by the four Austrians on the second run.

However, all but one of the containers had sunk into deep snow, and the vital radio had been damaged. The group hurriedly left the area as the aircraft engines had alerted German troops, who began a search of the mountain.

Linking up with local Resistance fighters later, the agents were provided with a new radio taken from the officer of Heinrich Himmler’s second-in-command, who had fled from the advancing Allies.

Vast supplies of Nazi loot were still arriving at the salt-mine depository, but the group’s task was made much easier when they discovered that the man in charge of the facility was a Communist and secret member of the Resistance.

Following covert surveillance, the team discovered that among the treasures being received were six mysterious crates which were opened to reveal 500lb aircraft bombs, primed and ready to go off at any given time to destroy the priceless collection.

The agents made their move when the German sentries deserted the mine to avoid capture by the Allies. This was a crucial moment, as they feared at any time the arrival of a demolition party with orders to blow up the hoard. The 80th US Infantry Division soon arrived and took over safekeeping of some of the greatest artistic legacies of Western civilisation.

William Leckie was born in Glasgow on June 23, 1921. He left school at 14 to be an apprentice motor mechanic but attended night school to improve his education because he already had a keen interest in aviation. He later became a junior cinema projectionist.

His father had served in the Argyll and Sutherland Highlanders in India and was sailing home for demob when his troopship was diverted to Gallipoli, where he was captured and spent the rest of the Great War in a Turkish prisoner of war camp. This had a profound effect on his health and the family moved from congested Glasgow to a smallholding in Plains, near Airdrie, Lanarkshire, where they bred hens and sold eggs.

In June 1941, Leckie followed his best friend and cousin, Fred, into the RAF as aircrew. When Fred was lost on a bombing mission over Germany, Leckie resolved to do his duty and honour him.

He started pilot training near Cheltenham before being sent to Canada and America for further training. Returning to the UK, he expected to pilot Catalina flying boats but was instead posted to Bomber Command, where one mission involved attacking a flying bomb factory in Germany.

In August 1944, he was transferred with his crew to 148 (Special Duties) Squadron at Brindisi, Italy, from where he dropped guns, ammunition and food to Polish resistance fighters in the Warsaw Uprising against the German occupiers. For that daring, low-level mission in which many aircraft were lost, he was awarded the Polish Cross of Valour.

Reflecting later on his secret missions, Leckie insisted that sometimes “ignorance is bliss”. He added: “I ponder these days that perhaps it was just as well that security was so strict during the war and we did not know exactly what was in front of us.

“At least we were then able to concentrate completely on our own area of expertise and allow others to continue with theirs. The saying goes that ignorance is bliss, but in special operations the ignorance of others to know what you are up to is sometimes essential.”

He returned to his work as a cinema projectionist before joining the home appliance firm, Hoover. He then worked in civilian pilot training at Scone, Perthshire, before moving to Ireland, where he joined Aer Lingus, flying from Dublin to New York among other routes.

Following retirement in 1979, he lived in Troon before returning in recent years to Ireland to live with his son, Allan, in Enniskerry. He was honoured on his 100th birthday with a flypast by the Irish Air Corps and his funeral was attended by representatives of the Royal British Legion as well as Irish military personnel.

Leckie, who died last October, was a quietly-spoken man whose modesty meant many of his heroic wartime exploits were known by his comrades in the Scottish Saltire Aircrew Association, but not his friends and family.

His wife, Ina, died in 2012, and he is survived by Allan, daughters Irene and Fiona, seven grandchildren and four great-grandchildren.