Joint decision on returning sixteenth-century majolica dishes seeks a human dimension. The museum and the Gutmann family heirs have reached an agreement that is a first and which possibly will set a precedent for the Restitutions Committee. 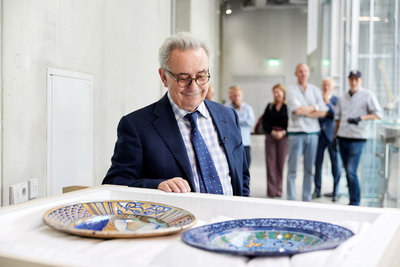 During the Second World War, the art collection of the Jewish couple Fritz and Louise Gutmann was stolen by the Nazi regime. The Gutmann collection included eleven Italian majolica dishes, which entered the collection of Museum Boijmans Van Beuningen in 1968 through the long-term loan of the collection of Johan Willem Frederiks. It remains unclear how and when Frederiks acquired the maiolica dishes. After extensive research by the Restitutions Committee, no conclusive evidence can be found relating to the ownership of the dishes between 1933 and 1955. It remains unclear whether there was an involuntary loss of possession during that period. At the initiative of the Restitutions Committee, the museum and the heirs of the Gutmann family have reached an agreement: six dishes will be returned to the family, while the museum will keep five. The story of the Gutmann family collection will be given a prominent place in the interpretation of these pieces in the museum’s collection alongside the art-historical information about Italian maiolica. The pieces are now on display in Depot Boijmans Van Beuningen. One of the dishes returned to the Goodman family required restoration, which has been carefully carried out in the new Depot.

Simon Goodman, Gutmann family heir:
The Washington Principles made clear that consideration should be given to unavoidable gaps or ambiguities in the provenance, in light of the passage of time and the circumstances of the Holocaust era. This case, involving some of the finest pieces from the Gutmann maiolica collection, was a perfect example of those gaps and ambiguities. With the help of the Restitution Committee a Solomonic solution was achieved. Ultimately to be reunited with any work of art that was lovingly collected before the Holocaust by my family is today a powerful moment.’

Sjarel Ex, director of Museum Boijmans Van Beuningen:
‘By reaching this agreement, we have done justice to the desire to find a fair solution to a complex case. Within the museum’s collection, these objects tell an important art-historical story, but also embody a tragic family history. These narratives are now not opposed to each other but stand side by side. In claims in which the exact circumstances of the loss of possession remain unclear, this joint decision will hopefully set an excellent precedent in how joint consultation between heirs and museums can make the process more humane and less legal.’

Jacob Kohnstamm, chairman of the Restitutions Committee:
"We are very grateful to Simon Goodman and Museum Boijmans Van Beuningen for responding positively to our suggestion to consult with each other with the aim of reaching an amicable settlement. Even when there are vital gaps in the provenance, it is up to the Restitutions Committee to make the decision and advise on whether or not to restitute, but in such cases it is even better if there is an outcome in which there are no ‘losers’ or ‘winners’.”

A first and possibly a precedent

After the Second World War, the children of Fritz and Louise Gutmann, who were murdered by the Nazi regime, attempted to have the family’s art collection returned to them. In 2014, the Goodman family contacted Museum Boijmans Van Beuningen to enquire about the maiolica dishes. Years of research by the Restitution Expertise Centre followed, which was unable to determine the whereabouts of the dishes between 1933 and 1955. At the suggestion of the Restitutions Committee, the museum and the Goodman family entered into negotiations and agreed to divide the eleven bowls. In addition to the story of maiolica, the museum can now permanently tell another important stories: about the magnificent collection of the Gutmann family, inhumanity, bureaucracy, persistence, the importance of provenance research and restoring property to the direct heirs of those who suffered under the Nazi regime.

The Advisory Committee was established in 2001 to advise on artworks in the Netherlands looted by the Nazi regime. The committee was set up by the Ministry of Education, Culture and Science, but operates independently. In light of this joint decision, the Restitutions Committee will not issue a binding advice but has played an determining role in proposing that the two parties enter into discussions with each other. This decision demonstrates the importance of consulting each other and finding an appropriate form of legal redress together. As the legal owner of the dishes, the Municipality of Rotterdam has also cooperated fully in this process.