' Collecting and Provenance: A Multidisciplinary Approach'

Collecting and Provenance: A Multidisciplinary Approach 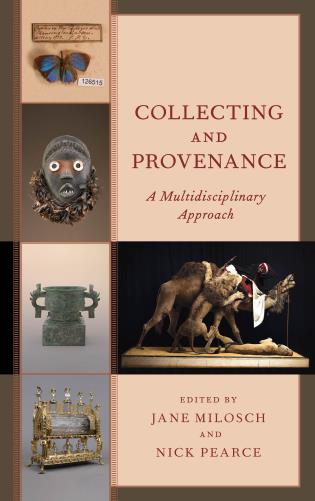 The study of provenance—the history of the creation and ownership of an artefact, work of art, or specimen—provides insights into the history of taste and collecting, illuminating the social, economic, and historic trends in which an object was created and collected. It is as much a history of people as it is of objects, and its study often reveals intricate networks of relationships, patterns of activity and motivations.

This book promotes the study of the history of collecting and collections in all their variety through the lens of provenance, and explores the subject as a cross-disciplinary activity. Perhaps for the first time in a publication, it draws on expertise ranging from art history and anthropology, to natural history and law, looking at periods from antiquity through the 18th century and the Holocaust era to the present, and materials from Europe and the Americas to China and the Pacific. The issues raised are wide-ranging, touching on aspects of authenticity, cultural meaning and material transformation and economic and commercial drivers, as well as collector and object biography.

Jane Milosch directs the Smithsonian Institution’s Provenance Research Exchange Program, and was founding director of the Provenance Research Initiative (SPRI), which focused on WWII-era provenance research, international cultural heritage, and training programs. She previously served as Senior Program Officer for Art, leading pan-institutional programs and strategic planning efforts, and was appointed the U.S. Representative to Germany’s “Schwabing Art Trove” Task Force. She has held curatorial positions at the Renwick Gallery, Smithsonian American Art Museum, Washington, DC. and in Detroit, Iowa, and Munich, Germany, and is an Honorary Professor in the School of Culture & Creative Arts, University of Glasgow. She was awarded the Cross of the Order of Merit of the Federal Republic of Germany in 2020.

Nick Pearce holds the Sir John Richmond Chair of Fine Art at the University of Glasgow, and specializes in the arts of China, most particularly in the context of the history of collecting. His career has spanned both museums and universities, as he has held positions at the Victoria & Albert Museum, The Burrell Collection in Glasgow, and at Durham and Edinburgh universities. He joined the University of Glasgow in 1998, where he has held the positions of Head of History of Art and Head of the School of Culture & Creative Arts, and is a Smithsonian Research Associate.