Walter Westfeld painting at MFA Boston June 2011: Provenance Outreach Conducted by Museum of Fine Arts Boston Results in Agreement to Retain Ownership of Eglon Van der Neer's 'Portrait of a man and woman in an interior'

A six year research international research project by the MFA has led to an agreement with the estate of German art dealer Walter Westfeld (1889–1945), enabling the MFA to retain ownership of a painting which the MFA concluded had been disposed of due to persecution. To read the MFA's press release, click here.or read below. 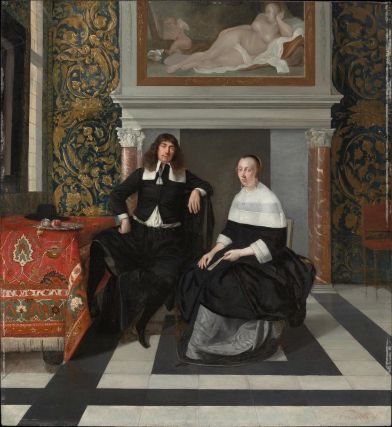 PROVENANCE OUTREACH CONDUCTED BY MUSEUM OF FINE ARTS, BOSTON, RESULTS IN AGREEMENT TO RETAIN OWNERSHIP OF EGLON VAN DER NEER’S PORTRAIT OF A MAN AND WOMAN IN AN INTERIOR

BOSTON, MA (June 26, 2011)—Research conducted by the Museum of Fine Arts, Boston (MFA), about the provenance, or history of ownership, of its painting Portrait of a Man and Woman in an Interior (1665–67) by Dutch artist Eglon van der Neer (1634–1703), has led to an agreement with the estate of German art dealer Walter Westfeld (1889–1945), enabling the MFA to retain ownership of the work.  The Museum decided to reach a financial settlement for the painting with the estate after reviewing recent research conducted by Victoria Reed, the Museum’s Monica S. Sadler Curator for Provenance.  This research has clarified few details about the path the work took between 1936, when it was last documented in Westfeld’s possession, and 1941, when it appeared on the New York art market.  While the six-year, international research project was not conclusive, it resulted in the identification of a limited number of ways the painting could have left his possession during this time.  Based on these scenarios, it is unlikely that Westfeld gave or sold the painting voluntarily, but rather, as a Jewish art dealer living in Nazi Germany, disposed of it due to persecution.

When the Museum purchased Portrait of a Man and Woman in an Interior in December 1941 from E. and A. Silberman Galleries, New York, there was little known about the work’s 20th-century history.  In 1943, the MFA learned that the van der Neer had belonged to Westfeld prior to World War II, but had few details about when he acquired it or how it might have left his possession.  In 2000, the MFA launched a provenance page on its website (www.mfa.org), where it sought information about the painting and several other works.  In 2004, Westfeld’s nephew, Fred Westfield, saw the painting on the Museum’s website and discussions about the painting’s provenance followed.

“This resolution highlights the importance of offering world-wide access to the history of works of art on our website and reaffirms the Museum’s ongoing commitment to provenance research,” said Malcolm Rogers, Ann and Graham Gund Director of the MFA.  “We are pleased to have arrived at a successful outcome, reaching a settlement with the estate of Walter Westfeld and acknowledging his legacy.”

Measuring approximately 29 by 27 inches, the work is on view in the MFA’s Robert and Ruth Remis Gallery (Europe, 1600–1800).  It depicts an affluent couple seated comfortably in a well-appointed room, with embossed leather covering the wall and a Persian carpet on the table.  Dutch artists often depicted paintings within paintings to comment on their subjects, and here the image of Venus over the mantel may allude to the couple's marital harmony.  (When the painting originally entered the Museum’s collection in 1941, Venus had been over-painted with a sedate landscape, reflecting the more conservative taste of a later age.)

Provenance of Portrait of a Man and Woman in an Interior

Westfeld opened his art gallery in Elberfeld (present-day Wuppertal), Germany, in 1920.  A 1935 decree from the Reichs Chamber of Fine Arts later forbade him, as a Jewish person, from working as an art dealer.  After an unsuccessful attempt to appeal this ruling, he was ordered to close his gallery in May 1936.  That very month, an exhibition of works of art owned by Westfeld was held at the Galerie Kleucker in Düsseldorf, including a “Company Scene” by Eglon van der Neer.  Research indicates that this was almost certainly the MFA painting, which Westfeld had bought from his associate, Paris-based dealer Robert Lebel, around 1935.  After May 1936, the painting’s paper trail ends, but in the ensuing period, Westfeld was forced to sell off his gallery stock through the Galerie Kleucker, which was run by his non-Jewish friend and associate.  Whether the van der Neer painting was among the stock sold at this time, or was considered Westfeld’s private property and remained in his possession, is not known.  After the closure of his gallery, Westfeld continued to sell paintings in order to survive, although he was forbidden by law to do so, and thus kept his activities secret.  There is no complete record known of his transactions, many of which took place through Kleucker.

Outside of Germany, Westfeld maintained business relationships in France and the Netherlands, in violation of German law.  He smuggled works of art into France, with the assistance of Lebel, in the summer of 1938, and entrusted other objects to a friend in Amsterdam, where they were left in a bank vault, only to be seized and sold after Germany invaded the Netherlands in May 1940.  Precisely which objects he took abroad, and what happened to them, is not known.

“The MFA’s van der Neer painting could have left Westfeld’s possession in a variety of ways.  It may have been sold or traded in Germany, liquidated through the Galerie Kleucker, sold or otherwise left in the Netherlands or smuggled into France,” explained Reed, who conducted the research on the painting.  “Its exact provenance may never be known; however, it is difficult to imagine a scenario by which he sold the painting voluntarily, receiving proceeds over which he had free disposal.”

In November 1938, Walter Westfeld was arrested for violating Germany’s foreign exchange laws.  All of the works of art that could be found in his possession were seized by Nazi authorities; these were auctioned in Cologne in 1939 (the title page of the catalogue reads: “forced sale ... from a non-Aryan collection”). The van der Neer painting was not included in this sale, and had probably left Westfeld’s possession already by November 1938.  Westfeld spent more than a year in pre-trial custody before being found guilty of foreign exchange violations in January 1940.  He spent the remaining years of his life in captivity.  After serving time in Remscheid penitentiary at Lüttringhausen, he returned to a police prison in Düsseldorf before being deported, in 1942, to the Theresienstadt concentration camp.  In January 1943, he was sent to the Auschwitz concentration camp, where he died.

When the MFA purchased the Portrait of a Man and Woman in an Interior from E. and A. Silberman Galleries in 1941, the dealer told MFA curator W. G. Constable that it was “brought to this country by a refugee some time ago, and I wish I were able to supply you with more information.”  Silberman appears to have purchased the painting in the spring of 1941, but it has not been ascertained from whom.  The gallery is no longer in existence and its records, which cannot be located, are believed to have been destroyed.

Provenance Research at the MFA

The MFA has been a leader in provenance research within the art museum community, especially regarding the Nazi and WWII period, which is highlighted at www.mfa.org/collections/provenance.  In 1998, the Museum began the systematic review of the provenance of its collection, with the goal of identifying objects that may have been improperly sold or traded during the Nazi era and World War II (1933–1945).   In 2000, the MFA launched on its website information and images pertaining to works of art whose Nazi-era provenance was unclear with the intention of identifying objects that may have been lost between 1933 and 1945 and never returned to their rightful owners.  Also that year, the Museum created a full-time provenance research position, which is now held by Victoria Reed, the Monica S. Sadler Curator for Provenance.  In 2008, the MFA initiated “Art with a Past: Provenance Research at the MFA,” a Museum-wide initiative to create label text for specific objects in the galleries addressing a wide range of provenance topics.  The Museum updates its website regularly with new provenance research discoveries.

Portrait of a Man and Woman in an Interior was one of seven works identified as high priority for provenance research by the MFA and currently included on the Museum’s website.  The other six are: