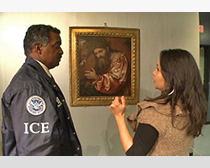 In a 4 November 2011 press release, ICE announced the seizure that day of  "Christ Carrying the Cross" by Girolamo Romanino – stolen as part of the widespread Nazi plunder of World War II - by its Homeland Security Investigations (HSI).  The U.S. Attorney's Office for the Northern District of Florida and ICE HSI filed a seizure action against the painting which has been on display at the Mary Brogan Museum of Art and Science since March 18, 2011, and was part of an exhibition of 50 Baroque paintings on loan from the Pinacoteca di Brera in Milan, Italy.

The seizure complaint and supporting affidavit alleged that the painting is among many works of art and other valuable items, taken in a forced sale from the estate of Federico Gentili di Giuseppe. In 1941, Gentili died of natural causes in Paris, just months before the Nazi army invaded France in 1941. After receiving advanced warning of the impending Nazi invasion, Federico Gentili's children and grandchildren fled from France, escaping to Canada and the United States. Other family members, who were unable to flee, died in concentration camps.

Gentili's grandchildren have taken legal steps internationally to find and reclaim works illegally taken from their family during the Nazi occupation. In a landmark 1999 decision relating to World War II plunder, a French Court of Appeals forced the Musee de Louvre in Paris to return five paintings to the Gentili family, and ruled that the auction of the Gentili estate in Nazi-occupied France was an illegal forced sale and a "nullity."

"It's never too late to right a wrong. Many people know about the massive theft and illegal sale of precious art belonging to Jewish families during World War II. They should also know that today there is an international network of law enforcement agencies working diligently to correct these injustices," said ICE Director John Morton. "ICE's Cultural Property, Art and Antiquities unit was established for this very reason – to identify, investigate and return cultural treasures to their rightful owners."

U.S. Attorney Pamela C. Marsh, Northern District of Florida, said that under U.S. law, the painting cannot be returned to Italy until the ownership disputes are resolved. "Our interest is strictly to follow the law and safeguard this work until the courts determine rightful ownership,” she said. “Through this process, all rightful claimants may be heard, and we can rest assured that justice will be done for all parties involved in the dispute."