Hitler vs Picasso and The Others

HITLER VERSUS PICASSO AND THE OTHERS
The Nazi Obsession for Art 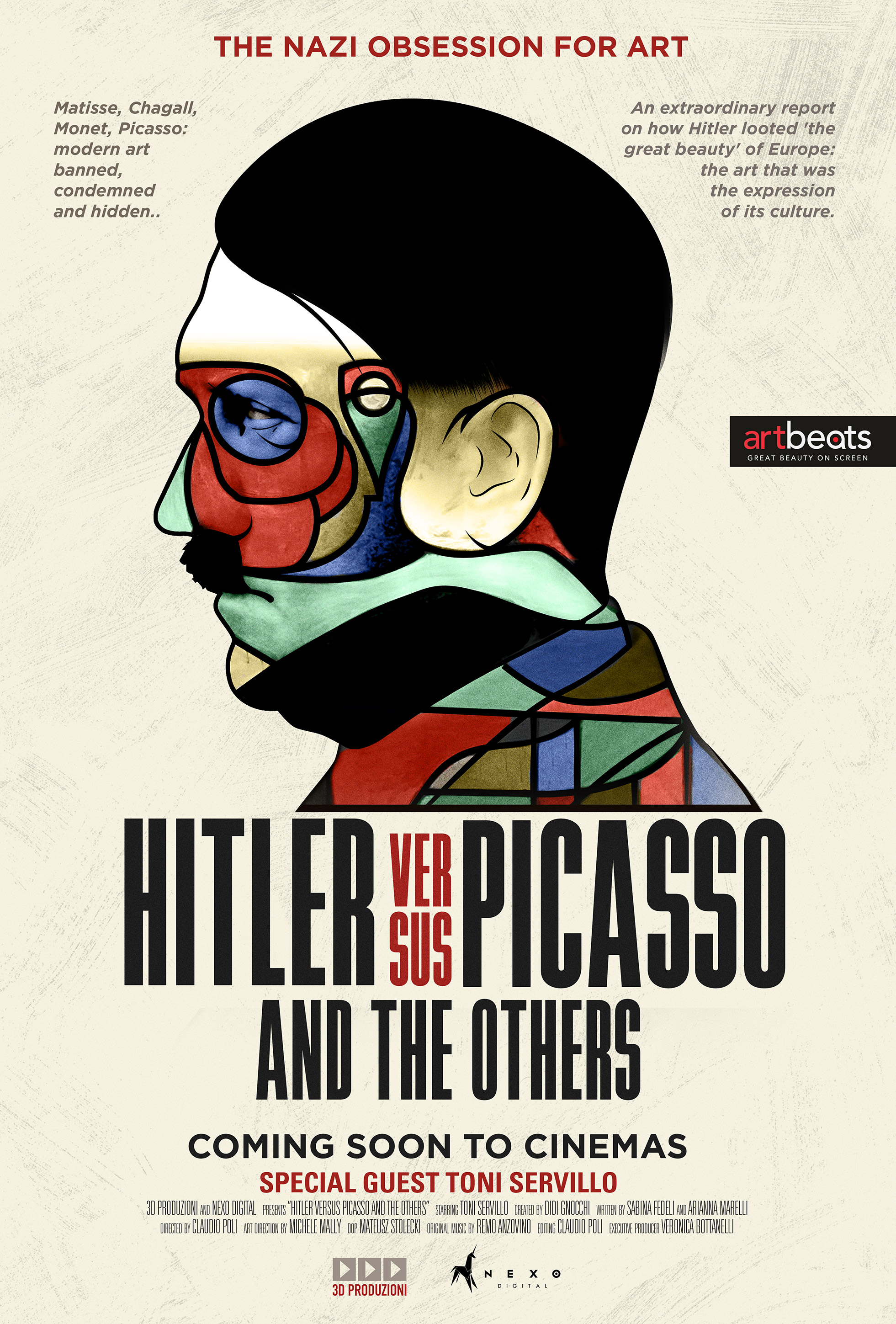 A sensational trove. A great discovery. A cinematographic tour through 4 stunning exhibitions. After 70 years from the Hitler’s declaration of war to “degenerate” art, an event film that reveals secrets of the Fuhrer treasure. Picasso, Matisse, Renoir and Chagall: paintings hidden, looted and condemned finally come to light to reveal the Nazi obsession for art on the big screen. Starting from the incredible Gurlitt case and of his massive collection, the true story of masterpieces persecutes and banned during the XX century.

Introduced and narrated by Toni Servillo, winner of 2 European Film Awards and protagonist of The Great Beauty, Best Foreign Film at the 86th Academy Award.

80 years have passed since the Nazi Regime placed a definite ban on so-called degenerate art, considered ‘cosmopolitan and communist’.

In 1937 an exhibition was held publically branding and stigmatizing it, at the same time, at Hitler’s behest, the confiscation began of ancient and classic works of art, of masterpieces that were to occupy those spaces imagined to be the Louvre of Linz.

This documentary tells many stories. And all of them revolve around three big exhibitions, the starting point for a series of human and artistic narratives:

The Nazi regime organized an exhibition in Munich of 650 works of art seized from 32 German museums and from the homes of private collectors. Art works were chosen from among modern trends in art that were not in line with the ‘idea of ​​beauty’ propagated by the Nazis.

Anne Sinclair, director of the Huffington Post, tells the story of her grandfather, Paul Rosenberg, one of the most interesting gallery owner and art dealer in the early 20th Century. He was a French Jew, a friend of Picasso, Braque and Matisse, and an extraordinary art collector, who in 1910, opened a gallery at 21 rue La Boétie, where he collected works of ‘degenerate art’. In 1942 he was deprived of his French nationality and part of his collection was stolen by the Nazis.

The final story brings us to 22nd September 2010. A train speeding down the track. On board an elderly German gentleman who turned out to be Cornelius Gurlitt. His father, Hildebrand, was the famous ‘Hitler’s Merchant’. Cornelius was hiding some of the most priceless art treasures of the century, among them “Portrait of a Lady” by Matisse, the painting belonging to expert and lover of Impressionism, Paul Rosenberg.

Produced by Nexo Digital, 3D Produzioni with the support of Sky Arts

Review: ‘Hitler vs Picasso and The Others’ at the Broadway Metro theater reveals the Nazis’ use of art to propagandize - by Max Eigener

Art doesn’t always serve to expand one’s mind or represent complex ideas or culture. The context in which people present art influences how viewers perceive it. Picasso said painting “is an instrument of war, an offensive and defensive weapon against an enemy.” Sometimes art can be used maliciously, as the Nazis did in the years leading up to and throughout WWII.

The potential of art to be used as propaganda is the foremost issue in the new documentary “Hitler vs Picasso and The Others.” The Broadway Metro theater in Eugene is showing the film during a special one-night-only event on Wednesday, April 4 at 6:45 p.m.

The film tells the story of how the Nazis looted museums and people’s personal art collections across Europe. It describes how the regime portrayed many stolen works of art and their artists as a threat to its autocratic, white-supremacist society. Hitler, who was an aspiring professional artist in his younger years and rejected by Vienna’s Academy of Fine Arts twice, deemed modern works “degenerate art” and banned them across the empire.

The documentary revolves around five exhibitions, starting with the 1937 Nazi-curated Munich exhibit called “Degenerate Art,” which travelled to 12 cities in Germany and Austria. The exhibit intended to propagandize residents of those cities and cast 650 works of stolen art as contrary to Nazi ideals of Aryan beauty. The Nazis contrasted their framing of so-called “degenerate art” with the “Great Exhibition of German Art,” which glorified the appreciation of art they saw as purely Aryan.

The film then shifts to the story of the French-Jewish art collector and gallery owner Paul Rosenberg, who was a friend of great artists such as Picasso and Matisse, whose work was confiscated by the Nazis. In 1910, Rosenberg opened a gallery called “21 rue La Boétie” in Paris, but in 1942, the Nazis stripped Rosenberg of his French citizenship and took every piece of art in his collection. Rosenberg’s granddaughter and Huffington Post Editorial Director, Anne Sinclair, tells his story in the film.

The final set of exhibitions featured in the film take viewers to present-day Germany. In 2010, German customs officials stopped a train to Munich for a random passenger check. Cornelius Gurlitt, the son of one of Hitler’s primary merchants of stolen art, Hildebrand Gurlitt, was on the train and questioned by the officials. They ultimately discovered that Gurlitt was still hiding works by Monet, Picasso and Matisse in his apartment. This section of the film focuses on two paired exhibitions in Bern and Bonn, Germany featuring the works that Gurlitt had kept hidden.

“Hitler vs Picasso and The Others” will leave viewers with a greater understanding of how the Nazis used art to shape their wretched national identity. The stories of struggle and loss during the Nazi reign featured in the film offer a fascinating, new look at a familiar part of history.

In “Hitler versus Picasso and the Others,” the final scars of World War II are far from healed. Art, argues the documentary, which played at the Black Family Visual Arts Center over the weekend, is the final Achilles heel of Germany’s atonement and the unfinished business of World War II.

To set the stage, a bit of history: Nazi soldiers looted and plundered an estimated 20 percent of all art ever made. Much of the art is still missing — an estimated 15 to 20 billion pounds in current art market value. The Third Reich launched a war of military and culture and sought to elevate its Aryan vision while exterminating anything that might contradict it.

Hitler understood art’s connection to culture and cultural identity. By destroying the art he deemed “degenerate” and elevating the art of German and classical artists, the Führer created and refined a distinctly Aryan aesthetic. Just as important as radio, posters and speeches, art was propaganda for the Nazi party, which sought to create an absolute aesthetic and manipulate it accordingly.

Nazism revered works of classical antiquity. Paintings that depicted bucolic farmland, families and working youths were also elevated. So too were rather obscene nudes, thought to encourage procreation and the growth of the Aryan race. Art served to refine the narrative put forth by the Nazi party. Art that did not fit within the narrative was termed degenerate. This included much of the avant-garde: Cubism, Surrealism, Expressionism and other modernist genres were all deemed cosmopolitan and communist. The Nazi party looked to destroy non-German culture as it built German culture. At the height of the war, an entire division of the Nazi Party was dedicated to the appropriation of the cultural property of non-Germans. The Reichsleiter Rosenberg Taskforce — in German, the Einsatzstab Reichsleiter Rosenberg — had branches with extensive operations in every Nazi-occupied country.

Enter “Hitler versus Picasso,” which examines the cultural war through the lens of three major art exhibitions. Italian actor Toni Servillo, who won a European Film Award for Best Actor for his performance in 2013’s “The Great Beauty,” narrates our journey.

“Degenerate Art,” opened in Munich on July 19, 1937, was the Nazi regime’s exhibition of what was considered despicable, low art. The paintings were hung haphazardly on the walls, often without frames. “Degenerate Art” was pure propaganda, attempting to demonstrate the loathsome nature of art that did not align with the Nazi Aryan aesthetic. Predictably, the showing was wildly successful.

Servillo takes us next to “21 rue La Boétie,” held in Paris in 2017. Anne Sinclair, editorial director of the Huffington Post in France, details the story of her grandfather, Paul Rosenberg, a prominent Jewish art curator and socialite. He associated with prominent artists and was good friends with Picasso, reportedly referring to him as “Pic.” In 1942, the Nazis seized much of Rosenberg’s collection and revoked his citizenship.

Finally, the film explores the collection of Cornelius Gurlitt. The reclusive Gurlitt, whose father worked for the Nazi regime, was found to possess over a thousand works of art that had been plundered from Jewish families during the war, valued at more than a billion dollars.

While “Hitler versus Picasso” has its strengths, a viewer with an interest in art history and theory is left waiting for more about the tensions between Nazis and artists, who were surely aware of the cultural crimes that had befallen their work. “Hitler versus Picasso and the Others” is a punchy title, but the audience is offered little about how the artists viewed their role during wartime. Lacking a tie to the humanity of the artists and the story of wartime works themselves, the film is lost in the yellowing pages that it so thoroughly investigates. Indeed, it is not until the end that we actually hear the voice of an artist at all.

When we do, it packs a punch. The final moments of the film depict a conversation between a Nazi official and Picasso about his famous wartime masterpiece “Guernica.” The piece — eleven and a half feet high, over twenty-five feet long and painted in only black, grey and white — creates a jarring and disturbing wartime scene of dismembered bodies, brutal torture and unmitigated chaos.

“Maestro,” says the officer, “did you do this?”

The background music crescendoes and the camera tightens in on the piece.

This film is timely as the Gurlitt collection, extensively detailed in the film, reopens in Berlin in September. While a bit overlong, “Hitler versus Picasso” provides a compelling view into the wartime exploits of a regime obsessed with cultural creation and destruction.