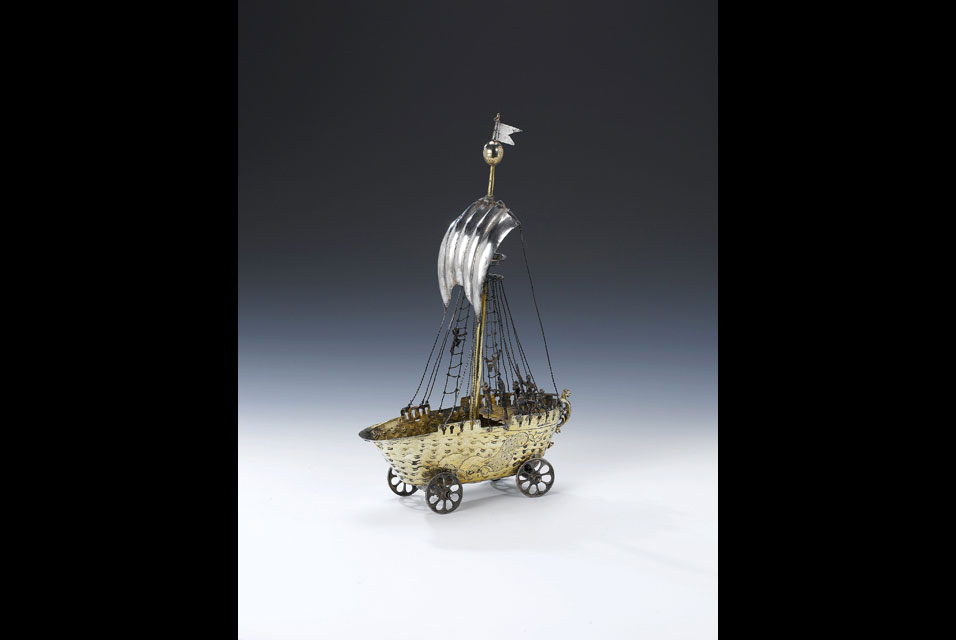 The spectacular 150 piece collection had been amassed by a Jewish couple, Fanny and Ernst Egger

LONDON.- A 17th century German silver-gilt table decoration in the form of a ship (£20,000-25,000) with a tragic and poignant history appears at auction in Bonhams Silver Sale in London on 3 November 2010.

It is being sold by the Viennese born Hungarian aristocrat, Count Ferdinand Orssich de Slavetich, and is only one of two known surviving pieces from the fabulous Egger Silver collection confiscated by the Gestapo in Vienna in 1944 and sold anonymously by the Nazis at auction in December of that year.

The spectacular 150 piece collection had been amassed by a Jewish couple, Fanny and Ernst Egger, who were arrested in 1944 and sent with the rest of their family to a concentration camp where they died sometime before the end of the war.

Ferdinand Orssich was Fanny and Ernst’s step grandson - his father, who was not Jewish, had married the Egger’s daughter. He acquired the ship when a friend of the Eggers bought it, unwittingly, at the ‘44 December auction, and returned it once he realised where it had come from.

Technically known as a nef, the ship was made by Jeronymus Gilg in Augsburg in the 1620s. Elaborately and beautifully decorated, it features six figures - four firing rifles - at the rear of the rig and two further figures in the rigging and is raised on four wheels so it can be rolled along the table.

Nefs, which date from the 13th century, originally had a practical purpose to hold salt and pepper, napkins or cutlery. They later became purely ornamental and were placed in front of the most important person at the table as a status symbol.

The only other piece from the Egger collection ever to have resurfaced was a silver cup found in a Viennese Museum by an Austrian Committee investigating art works in public hands stolen during World War II. It was returned to the family but all the other pieces are presumed to be in private hands.

A surviving catalogue from the 1944 auction (not included in the Bonhams sale) gives some idea of the importance and great value of the collection.

Ferdinand Orssich, who is now in his early 90s, saw active service in World War II as a conscript in the Hungarian Air Force where he fought on the Russian Front. After the war, he was caught up in the Soviet take over of Hungary and only escaped when the Ambassador of El Salvador granted him citizenship. On his release, he returned to Vienna then moved to Spain in the 1960s where he lives to this day. He is a former Ambassador of the Order of Malta to the Spanish Court