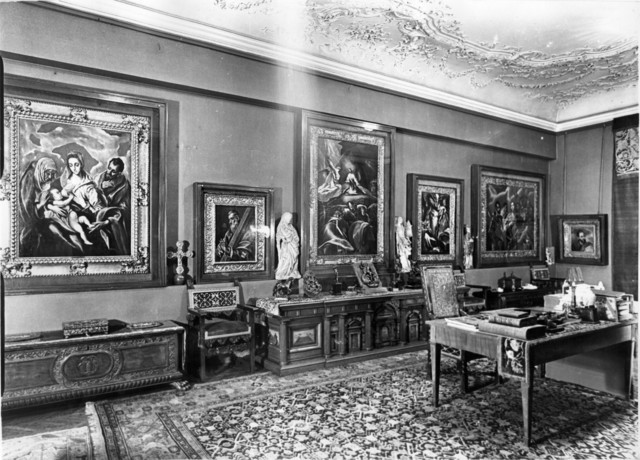 Baron Mor Lipot Herzog's study in Budapest, with works by El Greco. The family suffered persecution in World War II and has campaigned for seven decades to recover its looted art collection from the Hungarian government. Source: Holwell Shuster & Goldberg LLP via Bloomberg


The heirs of a pre-World War II Jewish collector who are seeking to recover art worth more than $100 million said a U.S. court ruling and a Hungarian government announcement are steps toward success in their 70-year struggle.

The U.S. Court of Appeals for the District of Columbia circuit on April 19 rejected Hungary’s motion to dismiss the Herzog complaint, paving the way for a lawsuit to proceed. On April 16, Hungary announced plans to begin restituting looted art in Hungarian museums to owners persecuted in World War II.

The legal decision “brings us one step closer to restoring what was lost to my aunt and her family and has been held hostage by the government of Hungary for more than half a century,” David de Csepel, one of the heirs, said today in a statement sent by e-mail to Bloomberg News.

Baron Mor Lipot Herzog assembled one of Europe’s great private art collections, the largest in Hungary, with more than 2,000 pieces by artists including Diego Velazquez, Pierre- Auguste Renoir and Claude Monet. The art was looted by occupying Nazi Germany and by the Hungarian government of the time.

The heirs are seeking the return of more than 40 works from Budapest museums, including paintings by El Greco, Camille Corot, Lucas Cranach the Elder, Anthony van Dyck and Gustave Courbet. The works are housed at the Museum of Fine Arts, the Hungarian National Gallery and the Museum of Applied Arts. Until now, Hungary has refused to hand them back.

Yet on April 16 Janos Lazar, chief of staff to Hungarian Prime Minister Viktor Orban, said that his office is preparing a list of works of art of disputed ownership in Hungarian museums with the aim of returning looted objects to the rightful owners. He did not specifically mention the Herzog case, which Hungary is contesting in the U.S. lawsuit.

“With this change in policy, the heirs should get back works of art that rightfully belong to them,” Agnes Peresztegi, a lawyer for the Herzog family, said in the statement. “The decision has enabled the government to distance itself from the previous governments’ policy of attempting to use legal technicalities to avoid restitution of looted art.”

After Herzog’s death in 1934, his wife inherited the collection; when she died in 1940, their three children, Erzsebet, Istvan and Andras divided it among them. With the outbreak of World War II, the family became victims of persecution by the Hungarian government, which allied with Nazi Germany.

Hungary enacted a series of anti-Semitic laws modeled on Germany’s. Thousands of Jews were deported and killed; by the time Soviet troops arrived, more than 500,000 of Hungary’s pre- war Jewish population of 825,000 were dead.

Andras Herzog was sent to a concentration camp, where he died in 1943. His daughters Angela Herzog and Julia Herzog fled to South America and settled in Italy after World War II. They, together with de Csepel, represent the Herzog heirs in the suit.

After World War II, Hungary pledged to return property confiscated from the Jews, yet kept the vast majority of the Herzog Collection. Litigation in Hungary in the 1990s failed.

The government in 2008 rejected a demand for the restitution of the artworks from Hillary Clinton in her capacity as chairman of the U.S. Congress’s Commission on Security and Cooperation in Europe.

The heirs filed suit against the Republic of Hungary in the U.S. District Court of Columbia in January 2011.