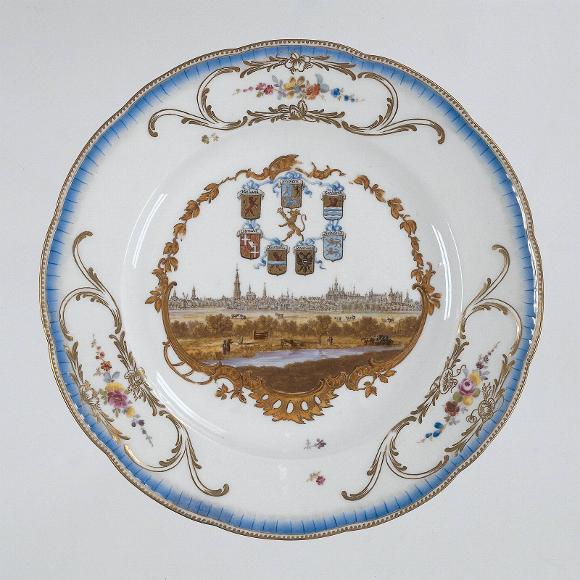 A plate from the Meissen collection.

The art collection of Palace Het Loo, the Rijksmuseum and three other museums are thought to include pieces and artifacts that were looted from a Jewish family during a Nazi plunder, the Telegraaf reports.

In total, 15 pieces of a valuable Meissen porcelain dinnerware ware set may have been stolen from the Gutmann family. The items may have been put up for auction in 1934 under coercion from the Nazis.

Now, 80 years after the fact, Amsterdam investigation bureau Artiaz was able to trace the pieces, to the museums. “We are taking this very seriously, and are going to establish an origins research action immediately”, a spokesperson of the Paleis Het Loo National Museum Foundation said in a reaction.

Artiaz traced the dinnerware set pieces by looking through old auction documents. “Salacious is that the Ekkart commission concluded a big investigation into looted art in Dutch museums without detecting these set pieces”, says Arthur Brand who executed the investigations with David Kleefstra and Alex Omhoff.

The Facts and Files bureau in Berlin investigated the case for the Gutmann family, who live in Germany, and concludes that the 15 porcelain gravy boats and plates were still registered as lost until yesterday. “We are expecting that the Gutmanns will request us to contact the Netherlands State and the Restitution Commission, so that the pieces can hopefully return to the family” says investigator Beate Schreiber.

The items are part of a unique 435-piece Meissen dinnerware set depicting village scenes, which was given to Willem V around 1774 as a gift from the United East-Indian Company. The prince sold the set during exile in England.

Later, 26 items were bought by Herbert Gutmann, son of banker Eugen Gutmann who set up the Dresdner Bank. When the Nazis came to power in Germany in 1933, they saddled him with a sky high debt.