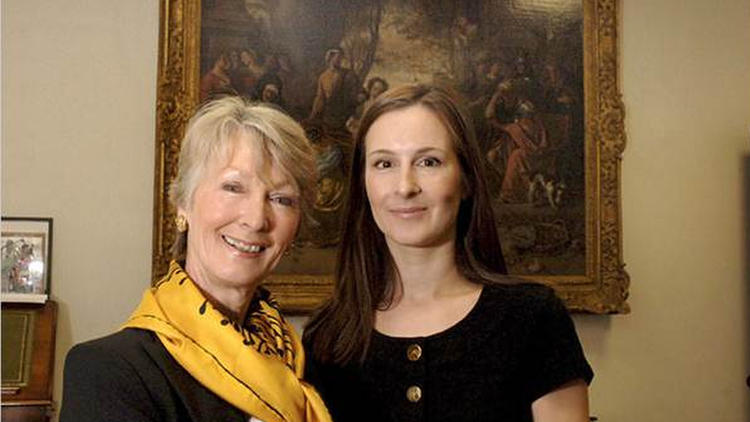 The Bible tells us that all the world's troubles began with Adam and Eve taking fateful bites of forbidden fruit.

The German Renaissance artist Lucas Cranach the Elder captured the moment in 1530, painting Adam and Eve on paired wooden panels that hang amid the stately calm of the Norton Simon Museum in Pasadena.

It's nothing like the netherworlds the 6-foot-tall paintings plunged through during the first half of the 20th century, when their owners included the Soviet regime of Josef Stalin and one of Adolf Hitler's top henchmen, Hermann Goering.

Because of that history, trouble continues to surround "Adam" and "Eve." They are the prize in a bitter seven-year court battle over who should own them: the museum that has shown them since the 1970s or heirs of Jacques Goudstikker, a Dutch Jewish art dealer who lost them to the invading Nazis in 1940.

A 2-1 ruling last month by the 9th U.S. Circuit Court of Appeals settled nothing, but it did keep Marei von Saher's case against the museum alive after it had been dismissed by a U.S. district court judge in Los Angeles.

Even though the accords are not legally binding, their moral force has led some museums and governments to rely less on legalism and more on a simple sense of justice when considering art-restitution claims by Holocaust victims and their heirs. Examples include a Henri Matisse painting that Goering had looted from a French Jewish art dealer, Paul Rosenberg. The Henie Onstad Art Center in Norway recently gave it up, saying it had "chosen to adhere to international conventions" by returning it to Rosenberg's heirs.

The two 9th Circuit judges urged the Norton Simon Museum to reconsider its position on "Adam" and "Eve" in light of standards called for in the Washington Principles of 1998 and the Terezin Declaration of 2007.

"Von Saher is just the sort of heir that the Washington Principles and Terezin Declaration encouraged to come forward," appellate Judge Dorothy Nelson wrote in her opinion, which was backed by Harry Pregerson but disputed by Kim McLane Wardlaw. "Allowing her lawsuit to proceed would encourage the museum ... to follow the Washington Principles … [and] may provide Von Saher an opportunity to achieve a just and fair outcome to rectify the consequences of the forced transaction with Goering."

Thomas Kline, a Washington, D.C., attorney who has represented both sides of the aisle in Holocaust art claims — clients trying to regain artworks and museums trying to keep them — said that this passage could have "a broad impact" because it introduces the idea that the Washington and Terezin accords are legally relevant in U.S. courts.

"The Von Saher opinion takes them very seriously as a definition of U.S. foreign policy, and that's different for sure," he said.

Luis Li, an attorney for the museum, said that the Norton Simon will ask for a review of the decision by an expanded 11-judge panel; last month the Norton Simon issued a statement saying it "remains confident that it holds complete and proper title to Adam and Eve."

If the decision stands, Von Saher would face at least one other legal obstacle as she tries to establish that her lawsuit is not unconstitutional.

When U.S. District Judge John Walter dismissed her case in 2012, he ruled that it improperly sought to second-guess U.S. foreign policy, which is solely up to the executive branch and not the courts. The appellate judges overturned his ruling but said that Walter should now delve into another issue — whether Von Saher's claim is allowable despite a legal doctrine that says the actions of foreign governments can't be challenged in U.S. courts.

Understanding the legal issues surrounding "Adam" and "Eve" requires some sense of the paintings' path through the 20th century.

According to to Von Saher's account of the history in court files, they had hung in a church in Kiev, now the Ukrainian capital, until the 1920s, when the Soviet Union seized them and made them national property.

In 1931, Stalin's regime included "Adam" and "Eve" in a big auction in Berlin aimed at replenishing the Soviet treasury. The high bidder was Goudstikker. When the Nazis invaded Holland in 1940, Goudstikker fled with his family, leaving his collection behind. (He died in an accidental fall aboard the ship carrying the family to America.)

His heirs have been trying since the end of World War II to recover all that the Nazis stole. They've regained many other artworks, but the claim for "Adam" and "Eve" remains unresolved.

Under a U.S. policy called "external restitution," Allied forces sent Nazi-looted art back to the countries from which it had been removed. It was left to postwar governments to determine the rightful owners. Goudstikker's widow was unable to wrest "Adam" and "Eve" from the Dutch government, which instead sold the paintings in 1966 to a member of a Russian aristocratic family, the Stroganoffs. George Stroganoff-Scherbatoff told the Dutch that his family had owned "Adam" and "Eve" when they were seized by the Soviets. The truth of the Stroganoff heir's claim is in dispute and would likely be an important issue should the case ever come before a jury.

Museum founder Norton Simon bought the paintings from Stroganoff-Scherbatoff in 1971. A 2006 appraisal valued them at $24 million.

The case is "the kind of thing law professors love" because the legal issues are so complex, and experts are watching it closely, said Stephen Urice, a professor at the University of Miami School of Law who focuses on cultural property matters. But he thinks it's the human element that gives the dispute its special fascination.

"On the one hand you have an extremely sympathetic and very tragic story and on the other a buyer in good faith who has made the paintings available to the public for many years," he said. "It's one of those heartbreaking cases where both sides are right, and one of them has to lose."

Walter's 2012 dismissal of Von Saher's case had turned on the fact that her mother-in-law, Desiree Goudstikker, had declined a 1950s offer by the Dutch government to negotiate terms for "Adam" and "Eve's" return. That offer fulfilled the Netherlands' responsibility under the U.S. policy of external restitution, Walter reasoned. External restitution was an element of foreign policy; since the law won't allow courts to revisit foreign policy decisions, Walter dismissed the case.

But not lightly. Realizing that he might be shutting the courthouse door to additional Jewish families who'd failed to recover art or had received meager compensation from notoriously recalcitrant postwar European governments, he wrote that he'd reached his decision "with great reluctance … realizing the effect that this … may have on victims of the Holocaust and their descendants."

The appeals court overruled Walter in an opinion issued June 6, the 70th anniversary of the D-day invasion, giving Von Saher a renewed beachhead in her fight.

The two-judge majority found in effect that Desiree Goudstikker had good reason to believe the Dutch government would not conduct fair negotiations with her for the return of "Adam" and "Eve." Her decision to walk away from any talks meant that the proceedings required under the U.S. external restitution policy had not taken place. They found that the suit brought by Goudstikker's heirs poses no unconstitutional conflict with foreign policy, because, as far as "Adam" and "Eve" are concerned, U.S. foreign policy directives never were carried out.

But the appellate judges broached another issue for Walter to consider when the case returns to his L.A. courtroom. When the Dutch government sold "Adam" and "Eve" to the Stroganoff heir in 1966, was it carrying out a government policy of its own? If so, Von Saher's claim could run aground on the "act of state doctrine," which prohibits U.S. courts from passing judgment on foreign governments' actions.

Some other federal jurisdictions have allowed suits to go forward if an act of state is purely commercial rather than intended to further some policy goal, said Carla Shapreau, a UC Berkeley law professor. She said the question of a commercial exception to the act of state doctrine hasn't come up before in the 9th Circuit, so "it's a matter of speculation" whether Von Saher can raise it to keep her case alive.

If she can, debate could focus on whether the Netherlands sold "Adam" and "Eve" to the Stroganoff heir to carry out a government policy of returning the paintings to a family the Dutch apparently believed had once owned them or whether it was purely a money-making transaction.

Von Saher's attorney, Lawrence Kaye, said he's confident she can prove that the 1966 sale of "Adam" and "Eve" was not an act of state that will block her case from going forward; he also said there's been no evidence to support a theory that the Stroganoff family ever owned the paintings.

At this point, said Urice, the University of Miami expert on cultural property law, the best thing would be for Von Saher and the Norton Simon to work out some kind of settlement. Perhaps, he said, the museum could pay Von Saher for "Adam" and "Eve," allowing it to stay on view in Pasadena. But, he added, that may no longer be possible.

"My hunch is the Norton Simon couldn't afford to buy out the family," Urice said. "You have a plaintiff who has incurred gigantic legal costs. The amount is going to be very, very large."

In the Bible, the story that begins with Adam and Eve eventually wends its way to King Solomon, who is said to have been the wisest judge of all. As the parties in Von Saher vs. Norton Simon Museum grope for justice against a backdrop of some of history's worst horrors, he'd probably be a good guy to have around.