Johannes Verspronck's Portrait of a Lady was stolen from a wealthy Munich family in 1939. 75 years later, by way of the Art Gallery of Hamilton, she's going home. 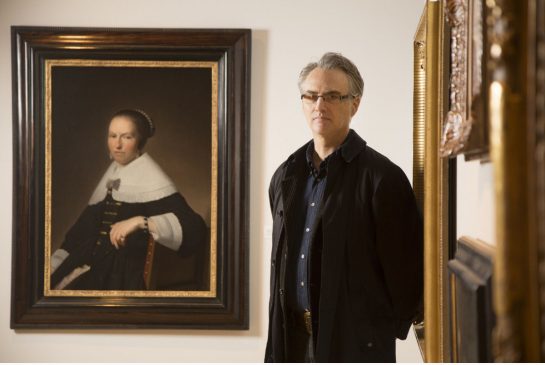 The Art Gallery of Hamilton's Benedict Leca stands next to Portrait of a Lady by Johannes Verspronck, a painting that will be repatriated to the rightful owner's family next year.

HAMILTON—In 1939, Alma Salomonsohn, a wealthy, cultured socialite living in Munich, was paid a visit by the celebrated physicist Max Planck, who happened to be a close family friend.

Planck arrived with an urgent message: The shadow of the Nazi war machine was growing longer by the moment, he told her. The border was mere hours from closing. If you ever want to see your sons again, leave now. Today. Tomorrow will be too late.

Salomonsohn, a Jew, was shaken. Her sons had already arrived in America; her husband, Artur, the former chairman of Deutsche Bank, had died almost a decade earlier. With the Nazi threat exploding, she was alone.

Quickly, she packed some belongings and set out for England. You can imagine a last glance around her remarkable home, filled with art and antiques and finery, before she slipped away, mercifully unnoticed, her life of privilege abruptly shifted from reality to memory.

It wasn't all she would leave behind. She had arranged for a friend, a Mrs. Wollfenstein, to package and ship her most precious things to her in a container. It would never arrive. When she left England for the U.S. during the war, rejoining her children and changing her name to Solmssen on American soil, it was without the things she previously held dear.

“When evildoers steal your property,” says Benedict Leca, “they come up with all kinds of excuses.” Leca, the curatorial director of the Art Gallery of Hamilton, is standing in a small gallery at the museum, where a stiffly mannered portrait of a Dutch noblewoman hangs — for the moment, at least.

Painted in the 17th century by the Dutch master Johannes Verspronck, it's sharp and moody, cast in dark, earthy greys and blacks. But there's a hint of mischief behind the woman's eyes, like a secret she's bursting to reveal.

If the woman in the picture could speak, she would tell you a lot — about the container that was never sent, but instead cracked open in Hamburg by the Nazis, who would find her inside. About how they shipped her to Frankfurt in 1941, where she was sold at the Heinrich Hahn auction house by a mysterious seller with the initials “F.L.” And about how, from that point on, she disappeared from public records for almost 50 years.

She could tell you about passing through the hands of London art dealer Johnny van Haeften in 1986, who obtained her — again — from an unnamed owner, passing it on to be sold at a Sotheby's auction in New York in 1987. There, the volunteer committee for the Art Gallery of Hamilton, a small, plucky Canadian museum determined to add to its collection of one Golden Age Dutch master painting, bought it for $50,000.

She could tell you, too, about the space in between — those 45 years of darkness, for which no records exist. What anyone can tell you now, though, is that she was the rightful property of Alma Salomonsohn/Solmssen, no matter where she was and who she was with, over all those decades. And finally, in spring of next year, she'll be going home.

This year, the gallery celebrated its centennial with an exhibition called “100 for the 100th,” for which it picked through its collection and selected an even hundred works to put on display. And there she was, in that little gallery of portraiture, one of three Golden Age Dutch master paintings in the museum's holdings.

Around the same time as the gallery was assembling the show, plans were being laid for her departure. After 54 years of searching, Alma's heirs had finally found her in Hamilton. In 2003, their Berlin-based law firm sent a letter to lay claim, asking for its return.

Not long after, the lead lawyer on the case died, and the claim went dark. Then, in 2011, it reappeared, and the wheels started turning again. When Leca arrived in Hamilton in 2012, “the first thing they gave me was a stack of papers, and told me ‘we need to deal with this right away,' ” he says. So he set to work, examining the evidence and tracking the painting through European databases. He found Alma had filed a claim for the painting in the 1940s, after arriving in the U.S., and corresponded with Wollfenstein trying to track it. The family provided an old photo of Alma, in her parlour in Munich, with the painting hanging nearby.

Alma never stopped looking, Leca says, a pursuit that seems to have meant more than just the work itself. “She had lived this magical life,” Leca said. “And she lost everything. It seems clear that this painting taken from her served as a sort of talisman for everything that was taken.”

Summarizing the evidence for the board, Leca concluded in his report that “we now need to ... return the picture to the Solmssen family of the U.S.A.”

“It was never ours to begin with,” he says. “So I'm happy to do the right thing, and give it back.”

With the return, Hamilton becomes the latest in a long list of museums digging deep into the vaults to find things they should never have had. Sensitivity to the issue is rising: Just last week, a museum in Switzerland announced it would defer accepting a collection of 250 masterpieces until it could do research on their provenance, with their owner, Cornelius Gurlitt, being the son of one of four Nazi-era art dealers who the fascists allowed to trade in art they had looted or banned.

It was an enormous industry. The Nazis stole tens of thousands of artworks leading up to and during the war, by various means: Some outright seizures, some forced sales. When the troops advanced to various European capitals, skimming storied museum collections for the cream to spirit back to Berlin was a common practice.

After the war, the Allies returned as much as they could, but thousands of works disappeared, just as Alma's Dutch lady did. Works were difficult to trace, says Josephine Mills, a former president of the Canadian Art Museums Directors Association, as they moved around in shadow to evade growing lists of claims being made by their angry owners.

It's been 16 years since Canada signed on as one of 43 countries to the 1998 Washington Conference Principles on Nazi-Confiscated Art, an international agreement to return the 100,000-plus stolen works still unaccounted for. What that commitment has meant to Canada, though, has been less than well-defined.

Mills, as the chair of an initiative started by CAMDO to determine how deep those Nazi roots go in the collections of Canadian museums, is looking to change that.

“People might think Canada is immune,” she says, “but as the Hamilton case shows, these things are still very possible.”

Earlier this year, CAMDO received a $191,000 grant from Canadian Heritage for a pilot project at six museums across the country meant to begin the arduous task of singling out works possibly looted by the Nazis.

The initial criteria is simple: Research the collections to find works with gaps in their records from the Nazi period, from the early 1930s to the end of the war, or later. It is, Mills admits, just a beginning.

“At this point the researchers are doing an overview and picking the easy ones,” she said. “There's a lot more work to be done, even within the initial six.”

The funding runs out in March of next year, but she's hopeful that a growing interest will spur it forward until every work of dubious origin is accounted for.

CAMDO has been thinking about this for a long time, Mills says, and with good reason. In 2007, it surveyed its 84 members, asking them to report back works in their collection with the provenance gaps. Only 10 responded, but the numbers were surprising: More than 800 works, and half of them significant pieces like painting or sculpture.

It's not to say that any work with that conspicuous blind spot is inevitably Nazi loot. The National Gallery of Canada had almost 100 works with the Nazi-era gap; conducting its own provenance research, it's managed to track the history of about 40, none of which have turned out to have Nazi ties.

But things happen. In 2006, the National Gallery found one painting in its collection, a 1904 piece by Edouard Vuillard, that was looted by the Nazis, which it returned to its rightful owner. In Montreal, the Musée des Beaux Arts unearthed its own stolen work, The Duet by 17th-century Dutch painter Gerrit van Honthorst, just last year.

How many more there might be locked in vaults at Canadian museums is anybody's guess. But Mills hopes that soon the guesswork will be gone. “None of us want to keep these works, if they are, in fact, stolen,” Mills says. “That's what this project is all about.”

Still, it's a daunting task. The provenance gap makes verifying each piece's status that much more so. Those in public collections have often been there for decades, filtering back into the world after their owners are long dead and their heirs unaware, as was the case in Hamilton with the Verspronck, which sat in Hamilton for 16 years before a legal research team located it and requested its return.

Technology changes everything, though, and museums are changing with it. Online registries of pieces reported missing or stolen exist in most of the 43 signatory countries now, and museums are moving to comply. They will do so at significant cost: None of the works are insured for restitution. In Hamilton's case, the Verspronck, valued at roughly $250,000, will be at the gallery's loss.

Partway through CAMDO's pilot project, the numbers are surprising: At the Art Gallery of Ontario, one of the six museums involved in the project, 46 works have already been identified. They've all been posted on the gallery's website, open to scrutiny and, if the case arises, a claim.

The names involved make up a foundational cohort of the museum's collection: Van Gogh, Gauguin, Chagall, Matisse, Monet, Picasso. Losing even a handful of these would significantly degrade the museum's holdings. But if they're proven to be looted, there won't be a question of what the gallery does next.

For the Dutch lady, for the first time in decades, the future is clear. When “100 for the 100th” closes in April, Alma's great-grandson, who asked not to be named, will collect her for a final journey to his family's vacation home in New Mexico. They have a spot picked out. “She'll have a view of Georgia O'Keefe's house,” he says.

You can imagine, maybe, with the painting finally on the wall, he and his family might drink a toast to great-grandmother Alma, her mission fulfilled at last. He knew her, growing up. “I know she'd be very happy,” he says.

Until then, you can still go see her, and wonder, maybe, where she's been all this time, and with whom. And know that finally, after all this time, her long, strange journey is at its end.