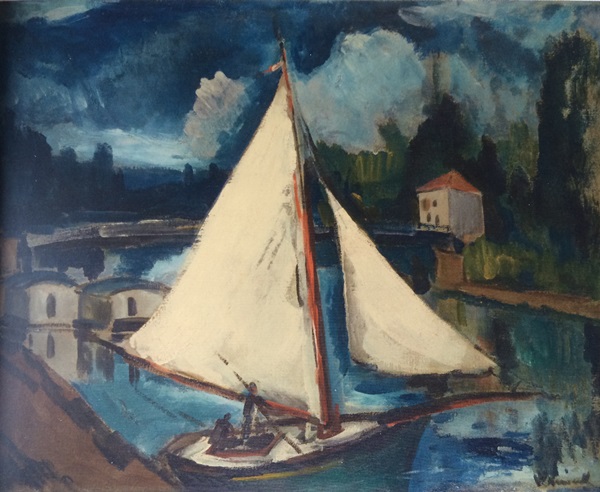 Maurice de Vlaminck's La voile blanche à Bougival (1909) was sold at Christie's London today following a settlement between the consignor and the heirs of Henry Dauberville. Nazis stole the work in 1940 and it had changed hands several times in the decades since.

It was a deceptively simple statement considering the sale had brought an end to longstanding dispute over the work, which had been looted by Nazis during the Second World War and had since changed hands numerous times.

Prior to this sale, the painting had come to the auction block about half a dozen times times since it was stolen—and the last three offerings had been hotly contested by heirs of the victim, Joseph Bernheim-Jeune (who later adopted the pseudonym Henry Dauberville). They tried unsuccessfully to recover the work.

So was the art world playing a version of "Pass the Buck" all these years? The painting seems to have come up for resale far more frequently than the average Imp/mod work, suggesting that successive buyers may have been alerted to possible red flags about its tainted history only after they inked a deal.

Like so many other works that owners and their heirs pursued for decades, the settlement surrounding this work reflects the extent to which treatment of possible Nazi looted works has shifted more and more to extreme caution and a pronounced emphasis on detailed and thorough due diligence about provenance, or history of ownership.

"We are encouraged that, even after 70 years the rightful owners of this work have had their claim recognized, allowing a historic wrong to be remedied at last," said attorney and art theft expert Christopher Marinello, who is now director of London-based Art Recovery International (see: Your Prized Picasso Is Missing?! Now What?). "If we have learned anything it is that it is never too late to mount a claim."

The painting's stormy history dates back more than seven decades, when Bernheim-Jeune, owner of Galerie Bernheim Jeune, a prominent Paris Gallery, was forced to flee the country during the Nazi occupation of France. According to information from Art Recovery, "the entirety of his collection within the gallery, as well as works held in his private residence, was unlawfully confiscated by the Nazis." Among these were several works by Vlaminck, who is described as "the pioneer of the Fauvist movement along with Henri Matisse and Andre Derain," according to a release from Art Recovery. The Fauvists–the French word for "wild beasts"—were among the earliest group of modern artists to pursue abstraction.

Along with galleries including Paul Rosenberg & Co, Wildenstein, and Jacques Seligman, Bernheim-Jeune was among the most prominent promoters of the so-called "degenerate" artists in Paris. Galerie Bernheim-Jeune hosted the first-ever exhibition of Van Gogh's work in 1901. (See: New Show Looks at Van Gogh's Pivotal Belgium Period, and Do Riches Await in The Van Gogh Market?)

Following the war, Bernheim-Jeune returned to France to assess the extent of his losses, and thereafter spent much of the rest of his life attempting to recover his lost collection including the Vlaminck painting.

According to a release from Art Recovery Group, the recovery efforts made since the work was initially confiscated illuminate some of the key issues faced by World War II-era claimants since the end of the war. After it was looted, the work disappeared for nearly two decades before it popped up at a 1960 sale at Sotheby's London. "No issue was raised against it and the work was sold again at Christie's London in 1978."

Among the previous sales listed in the Christie's catalogue are the 1960 sale at Sotheby's London, and two sales at the Hotel Drôuot in Paris (1974 and again in 1977). Later sales included one at Sotheby's London in 1988 (where it made $417,500), and Christie's New York in 1992, where, perhaps tellingly, it failed to sell on an estimate of $200–300,000. It is debatable whether the peak $417,500 price made in 1988 reflects the frothy Impressionist and modern market at the time, or the fact that rumors about the work's tainted history were increasingly giving buyers serious pause at later sales in the ensuing years.

It was at the 1978 Christie's London sale that the painting was spotted by Bernheim-Jeune's heirs, and they attempted, unsuccessfully, to halt the sale. A second attempt was made to stop the sale of the work when it popped up at Christie's in 1992 "but these efforts proved just as fruitless as the first" according to Art Recovery.

In 2011, the painting was again offered at New York auction house Doyle with an estimate of  $300-400,000 and failed to sell there, though a private sale was negotiated soon after.

It was at that point that Marinello began acting on behalf of the family and mediating between the auction house, the current owner, and the lawyers for each. This past November, all the parties finally reached a settlement.