The Commission for Art Recovery must lead by example if we are to end a lingering legacy of the Holocaust. 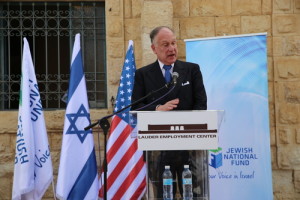 No sooner had the Axis powers begun waging “Blitzkrieg” across Europe than the looting began. Looting on an industrial scale. The US National Archives and Records Administration estimates that 20 percent of the art in Europe was plundered during the Nazi occupation, much of it from Jewish owners.

Measures introduced in the mid 1990s to aid in the restitution of this lost art serve as a regular reminder to those in the art industry of one of the 20th century’s darkest chapters. To this day, the provenance of historic art pieces is an important consideration for many art dealers, auction houses, and museums. Where once there was a fertile open market for art with an uncertain or checkered ownership history, this trade is increasingly being driven underground.

Despite these efforts, the numbers of items yet to be returned to their rightful owners still stands in the tens of thousands. Priceless works, including Lovis Corinth’s “Reclining Girl” and Galassi’s “Christ on the Mount of Olives,” remain lost.

In 2012, more than 1,000 pieces of artwork, many of them stolen, were discovered at the Munich home of Cornelius Gurlitt, son of the notorious German art dealer, Hildebrand Gurlitt. Among the trove were works by Matisse, Renoir, Liebermann and Chagall. Then, just two years ago, researcher Dominik Radlmaier announced that eight objects had been identified as lost art with a further 11 being under strong suspicion.

Despite these successes — and the ongoing efforts of teams of people around the world committed to Holocaust restitution — progress remains achingly slow. One immediate and obvious challenge is the failure of many individuals with significant private art holdings to publicly disclose prior ownership records. The problem is compounded by the failure of Jewish leaders and champions of Holocaust restitution to be transparent with their own art holdings.

Ronald Lauder, Chief Executive of the World Jewish Congress and Chairman of the Commission for Art Recovery, is a key example. Heir to the Estee Lauder cosmetics empire, Lauder grabbed global attention in 2006 for his $135 million acquisition of “The Lady in Gold” by Gustav Klimt. The piece formed a jewel in the crown at an exhibition held the subsequent year, titled: “Gustav Klimt: The Ronald S. Lauder and Serge Sabarsky Collections’”at the Neue Gallery, New York. Co-founded by Lauder and Sabarsky, the museum was conceived in part to publicly showcase early 20th century German and Austrian art and design.

Among the major collectors of German Expressionist and Austrian Secession artworks between 1918 and 1939 were wealthy European Jews, many of whom were forced to surrender their art when they were deported by the Nazis, or while fleeing persecution. Interestingly, and according to the New York Times, Lauder and Sabarsky’s respective collections are the most prominent private holdings of such pieces in the United States.

The absence of transparency regarding provenance, together with the seeming coincidence in the the types of art collections owned by Mr. Lauder is one issue. More problematic, however, is the subsequent excuse this provides to other owners of private art collections who are able to hide behind the veneer that their failure to disclose ownership records for pieces in their collection is justified and in line with the Chairman of the Commission for Art Recovery’s own actions.

The issue is made more serious by the added pressure of time. Every day that goes by, fewer survivors remain who remember their families’ collections and legitimate heirs become harder to track down. Time is running out for us to right one of 20th century’s most harrowing wrongs.