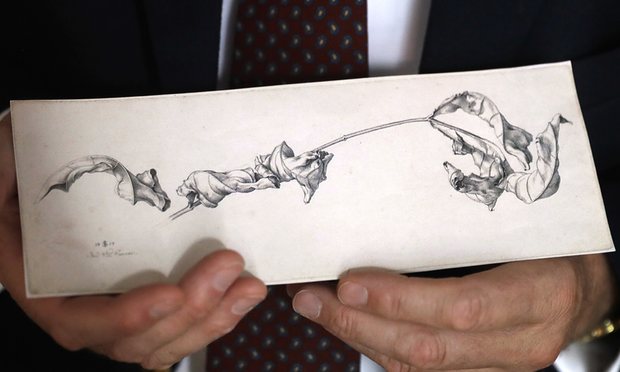 A replica of A Branch with Shriveled Leaves by the German artist Julius Schnorr von Carolsfeld. The original, sold under the Nazi regime, has been returned to the heirs of its owner.

The National Gallery of Art in Washington, DC has returned a 200-year-old drawing to the heirs of an Austrian woman who had to sell it during the second world war and later died in the Holocaust.

A Branch with Shriveled Leaves by the German artist Julius Schnorr von Carolsfeld had been owned by the artist’s descendants until Marianne Schmidl sold it under duress in 1939. Although Schmidl was a Christian, her father was born Jewish and she was declared Jewish by the Nazis after they annexed Austria. Her family last heard from her in 1942 after she was deported to a holding point for a concentration camp in Poland, and she was declared dead in 1950.

Over the past few years, museums have returned about 15 pieces of art to Schmidl’s heirs, said her grand-nephew Johann Schiller, who represents the family in negotiations on its lost artwork. The pen-and-ink drawing of decaying leaves was one of the most important works the family has reclaimed, Schiller said.

“My mother would sometimes say, ‘I wonder where the shriveled leaves are,’” he said.

A national gallery representatives handed the drawing to Schiller on Wednesday. The gallery has also reimbursed the family for a similar drawing in its collection that Schmidl sold – Shriveled Leaves by Friedrich Olivier, which like the other piece dates to 1817 – and it will remain in Washington. Both artists are among Schiller and Schmidl’s ancestors.

It is only the second time the national gallery has given back a work of art it had unknowingly acquired during the Nazi regime. Most art remained in Europe, and US museums have returned about 50 pieces in the past two decades, said Anita Difanis, director of government affairs for the Association of Art Museum Directors.

She said: “What has wound up in the United States are relatively few, and of those few, all of them may not be in museums. Most of them are probably in private collections.

Schmidl grew up in the lively culture of turn-of-the-century Vienna and was highly educated, earning a doctorate in ethnology, a branch of anthropology. She was working at Austria’s national library when Nazi Germany annexed the country in 1938 and forced residents to prove their Aryan heritage. After she was declared Jewish, she was no longer able to work and had to sell her assets.

Schiller said: “The letter that is basically her death sentence is an official notification by the Vienna police, saying, ‘Your application, Marianne Schmidl to be categorized as a Jew of mixed origin second class is being refused.”

“Had it been granted, she would have been regarded as a half-Jewish person and therefore would not have been deported.”

Schiller said his wife wept and he, too, became emotional, thinking about his great-aunt, when he received the drawing. He said he would like to keep it for sentimental reasons, but that it would be sold in keeping with the family’s wishes.

“What is important is that her dignity was restored, and what is absolutely fantastic: It was restored by the state,” Schiller said. “Here, the state is doing in effect, something which we can call the rule of law indeed enacted in the most noble way.”