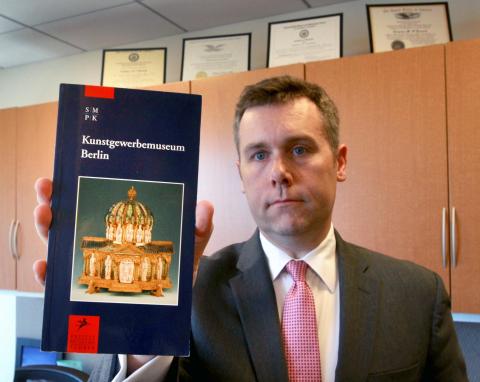 The Boston-based attorney representing the plaintiffs in a lawsuit against Bavaria to retrieve Nazi-stolen art told The Algemeiner on Tuesday that the case is about more than mere restitution.

Nicholas O’Donnell — who is representing the sole heirs of German-Jewish art collector and dealer Alfred Flechtheim in a case for eight paintings worth nearly $20 million that they claim were looted by Nazis — said, “In Bavaria, I think there is a real sense of defensiveness about what happened to the people who owned these looted pieces of art — and there haven’t really been any consequences, political or otherwise, for its stance, so it’s taken hold. Bavaria has a long way to go in correcting its notoriously backward thinking on this issue.”

O’Donnell — of the firm Sullivan and Worcester — is arguing the case for Dr. Michael Hulton and his stepmother, Penny Hulton, who filed the suit against Bavaria and its state museums on Monday in a New York federal district court. The Hultons charge that Bavaria — the birthplace of Nazism — and the Bavarian State Paintings Collections have refused to give them the artwork, despite the country’s public commitment to a “just and fair” resolution for assets stolen from Jews during the Holocaust.

The Hultons say Flechtheim fled Nazi Germany in May 1933 “in mortal fear,” and was forced to leave behind his art collection, which, they believe, was then looted by the Nazis and sold by Hildebrand Gurlitt, the infamous Nazi art dealer who served Adolf Hitler. Various paintings reportedly owned by Flechtheim — who died in 1937 — are currently on display at Munich’s Pinakothek der Moderne museum.

The Hultons are able to bring the case against Bavaria in the US, because America has jurisdiction over claims concerning property taken in violation of international law. After Bavaria is served with the lawsuit, it will have 60 days to respond.

Last month, 29 members of Congress sent a letter to Bavarian Minister President Horst Seehofer, supporting demands by Flechtheim’s heirs for restitution or compensation for the art.

This is not the first time Bavaria has been involved in controversy over Holocaust-era Jewish property. In June, a German newspaper revealed that the country had been entrusted with thousands of pieces of stolen art recovered by American forces, but Bavarian authorities did not return the property to the Jewish owners or their heirs. Instead, they kept several works to display in government building, and then made a profit by putting others up for auction and even selling to families of Nazi war criminals.

O’Donnell, the editor of  the Art Law Report, a blog on legal issues in the museum and visual arts communities, said in a press release, “[Bavaria’s] refusal to return the Flechtheim paintings and avoid the resolution of this and other claims on their merits is an insult to the victims of the [Nazi] movement that began right in Munich. It is past time for Bavaria to do the right thing.”