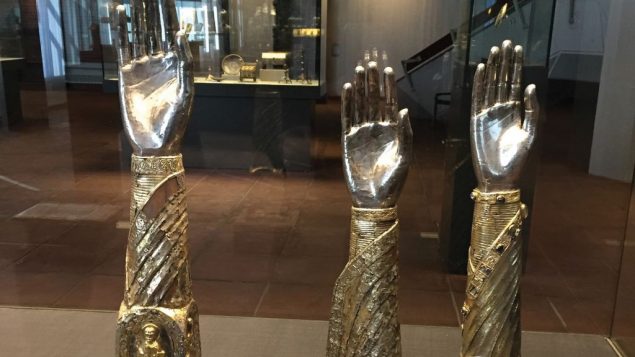 An arm reliquary of St. Lawrence from the Guelph Treasure, circa late 12th century.

What is shaping up to be another “Woman in Gold” court case involving Nazis, Adolf Hitler and Jewish-owned art is playing out in federal court in the District of Columbia.

A key difference is that the art in question is not a priceless family heirloom — as was Gustav Klimt’s “Portrait of Adele Bloch-Bauer I,” which became the subject of a court battle that was later made into the movie “Woman in Gold” — but rather an art collection that one lawyer described as Germany’s “crown jewel, similar to our Declaration of Independence.”

Germany is waging a court battle over the collection, known as the Guelph Treasure, even as the heirs of the Jewish art dealers who sold the collection contend that the 1935 sale was forced. The move appears to fly in the face of Germany’s commitment to abide by both the Washington Principles of 1998 and the Terezin Declaration of 2009, in which participating countries pledged not to use legal technicalities to avoid returning Nazi-looted art. 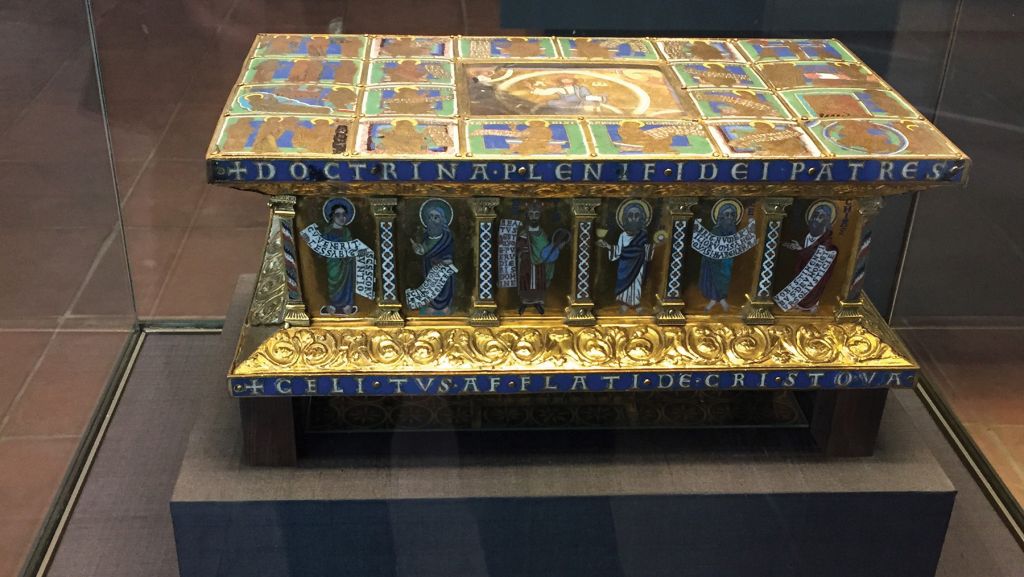 It also appears at odds with Germany’s announcement last month that it has created a $4.7 million national fund to subsidize provenance research (the chronology of ownership) into privately owned artwork suspected of being looted by the Nazis. Germany has already reportedly spent about $6.5 million for provenance research into the Gurlitt collection, artwork inherited by Cornelius Gurlitt, whose father, Hildebrand Gurlitt, was an art dealer who traded in Nazi-looted art.

Taken together, the recent developments — Germany fighting in court over the Guelph Treasure while at the same time funding provenance research — suggest the competing interests and the complexities at play as the country pursues a reckoning with its past.

The Guelph Treasure, now estimated to be worth $250 million, is a collection of medieval German church art bought in June 1929 from the Duke of Brunswick by a consortium of four German Jewish art dealers. They intended to quickly resell it at a considerable profit. But art prices collapsed when the stock market crashed four months later. In 1935, after selling 40 of the 82-piece collection during exhibits in Germany and a tour of the United States, the art dealers sold the rest of the collection to the Dresdner Bank in Germany, which was acting on behalf of Hermann Goering, the second most powerful man in Nazi Germany. He in turn presented it to Hitler.

The heirs of the art dealers are now suing Germany, contending that the Nazis, who rose to power in 1933, forced the dealers to sell. Germany denies their accusation and argued that it cannot be sued in the U.S. because of the Foreign Sovereign Immunities Act (FSIA) that limits suits against foreign countries. But on March 31, District Court Judge Colleen Kollar-Kotelly rejected that and other arguments and ruled that the case could be heard.

This is the first time a court has held that Germany can be sued for the return of Nazi-looted art and artifacts under the FSIA. Germany and the Prussian Cultural Heritage Foundation (SPK), which manages the museum in Berlin in which the Guelph Treasure is being exhibited, are expected to appeal the decision to the Court of Appeals for the D.C. Circuit.

In the case involving the “Woman in Gold” painting, the plaintiff, Maria Altmann, sued Austria in federal court in Los Angeles for its return, as well as four other family-owned paintings. The judge dismissed Austria’s claim that the court lacked jurisdiction and the Ninth Circuit Court agreed. Austria appealed to the U.S. Supreme Court citing the FSIA, but lost in June 2004 in a six-to-three ruling. After an arbitration panel in Austria also sided with Altmann, Austria returned the famous portrait and the four other family-owned paintings.

Nicholas M. O’Donnell, a Boston lawyer who is representing the art dealers’ heirs, said the Guelph Treasure is thus far “on the same trajectory” as Altmann’s case. He noted that his case was given added weight last December when President Barack Obama signed into law the Holocaust Expropriated Art Recovery Act that bars the use of legal technicalities to prevent a family’s claims from being heard on the merits.

But in their court papers, lawyers for both Germany and the Prussian Cultural Heritage Foundation (SPK), which is also being sued as manager of the Museum of Decorative Arts in Berlin in which the Guelph Treasure is now exhibited, insisted that the lawsuit “flies in the face of the Washington Principles and the Terezin Declaration, neither of which contemplates second-chance litigation.” They were referring to the fact that Germany has set up a panel of experts to verify looted art claims and that two years ago the panel concluded the art dealers’ sale “was not a compulsory sale due to persecution.

“Nothing in the Washington Principles or U.S. law allows plaintiffs to try their luck again in a U.S. court,” the lawyers insisted.

Their initial assertion that the sale could not have been a forced sale because “the sale predated the Holocaust by several years” was deleted in an amended complaint after Holocaust historians pointed out that the Nazi persecution of Jews began immediately after Hitler came to power in January 1933.

The lawyers pointed out also that since 1999, SPK has received more than 50 Nazi-looted art restitution claims and that it has “responded by returning more than 350 works of art and more than 1,000 books from its collections …. Along with SPK, German museums and institutions have returned more than 14,300 Nazi-looted items.”

Indeed, many have applauded Germany for its recent decision to help fund provenance research.

“This is a very good move on the part of the government of Germany, and it does not exist in other countries,” said Wesley Fisher, director of research for the Claims Conference. “It is generally to be praised.”

But Lillian Rosenberg, 89, a child survivor living in Whitestone, Queens, said these efforts come “too late” to help most survivors recover their artwork.

“I’m one of the youngest survivors, and there are not many people in my age group around anymore,” she told The Jewish Week. “They should have done more for us.”

O’Donnell, the heirs’ lawyer, said he has been an “outspoken critic of Germany’s measures” regarding restitution efforts.

“Any assistance is progress; the question is whether it is meaningful,” he explained. “What is lacking is comprehensive provenance research. It is hard work, it takes a lot of time, but a lot more could be done than has been done.”

O’Donnell pointed out that in the 1990s the Association of Art Museum Directors in the United States called on member museums to determine if their collections held anything that needed restitution.

“The German government could have asked their museums” to do the same, he said.

“It may be too little, but it is better than nothing,” he said. “There is no way the Jewish people can get back jewelry and gold that was lost in the Holocaust, but anything that is being done to enable survivors to reclaim assets is always good news, and I hope it will bring results.”

Mel Urbach, a Manhattan lawyer who is O’Donnell’s co-counsel in this case, said he too believes that “after all these years, any gesture to help families recover their belongings is the right step.”

But such provenance research “is something that should have been done years ago,” he argued. “To start the process now, you will inevitably find gaps in provenance [that could have been avoided] had we had testimony from the living heirs. It’s difficult after all these years to bridge the gap.”

Urbach’s German colleague, Markus Stoetzel, said he and Urbach as Holocaust restitution lawyers have “heard excuses and arguments for holding onto art. … We get the impression that there is some sort of amnesia going on, especially when it comes to provenance research. …”

In addition to helping German families determine if any of the art they hold was looted by the Nazis, Germany has for the first time agreed to help finance one family’s search for its Nazi-looted art collection.

The collection is that of Berlin publisher, art collector and philanthropist Rudolf Mosse and his son, Hans, who succeeded his father in 1920 as publisher of the country’s leading liberal newspaper, the Berliner Tageblatt. It is estimated that there were 4,000 works of art in the collection and that the Nazis confiscated it shortly after the Third Reich came to power, according to J. Eric Bartko, a California investigator who is spearheading the family’s search.

“In March 1933 – three months after Hitler became chancellor – the Nazis inventoried the collection,” Bartko told The Jewish Week, and compelled Hans and much of his paper’s Jewish staff to leave the country.

Before he fled to France and then the United States, Mosse was forced at gunpoint to sign over the publishing house to a foundation that allegedly helped German war veterans. The Nazis also seized the rest of the Mosse family’s property — including a castle, publishing business (the family owned newspapers across Germany, as well as Switzerland, Poland and Bulgaria) and its art collection, which the Nazis later sold at auction.

Bartko said he was able to locate the catalogues of two of the auctions but that they don’t represent the family’s entire collection. He said that since he began his search in 2012, he has been able to document 1,115 pieces from the collection, and has recovered about 18 pieces from institutions in Germany and Switzerland.

Meanwhile, the precedent-setting Guelph Treasure case moves along in a Washington, D.C., courtroom, fresh evidence on the eve of Yom HaShoah that, more than 70 years after the death camps were liberated, the quest for Holocaust justice proceeds in fits and starts.