Fate of precious collection sold to Prussia under Hitler’s rule should not be decided by American judges, officials say 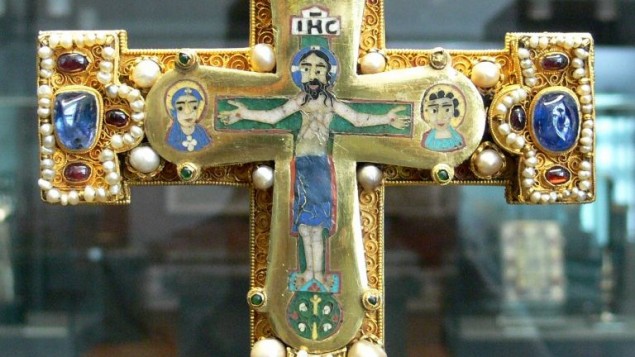 Close-up of an ornate cross found in the Guelph Treasure.

WASHINGTON — German officials plan to appeal a decision by a US judge that the heirs of Jewish art dealers can sue in a US court over art allegedly looted by the Nazis.

The heirs are trying to get Germany to return a collection of medieval relics valued at more than $250 million. The judge in Washington ruled earlier this month that the heirs can sue because the case involves a potential violation of international law. It was the first time a court has required Germany to defend itself in the United States against charges of looted Nazi art.

Attorneys for Germany and the Prussian Cultural Heritage Foundation filed a notice of appeal on Friday. The case would be heard by the US Court of Appeals for the DC Circuit.

The case involves the so-called Guelph Treasure, which was sold in 1935 to the state of Prussia, which at the time was governed by Nazi leader Hermann Goering. Following the sale, Goering presented the works as a gift to Adolf Hitler. The collection — which includes gold crosses studded with gems and ornate silverwork — has been on display in Berlin since the early 1960s.

The heirs argue that the sale was made under duress for a fraction of the treasure’s market value. Germany claims the sale was voluntary and that the low price was in part a product of the Great Depression. A special German commission concluded in 2014 that it was not a forced sale.

Nicholas O’Donnell, an attorney for the heirs, said he was disappointed by the appeal filing but he believes his clients will prevail.

“At the end of the day, (German officials) have to defend on the merits this transaction overseen by Goehring at these folks’ expense,” O’Donnell said. “It’s really unfortunate that they would make that choice.”

Hermann Parzinger, president of the Prussian foundation, said the case should not be decided by American judges.

“We are committed to the fair and just resolution of legitimate claims to Nazi-confiscated art,” Parzinger said in a statement.