Piecing Together the Histories of a Series of Stolen Paintings

April
Hyperallergic 17 May 2017
By Menahem Wecker

Among all the descriptions on all the different museum websites of a group of paintings originally designed to be shown together, there isn’t very much in the way of assuming responsibility or prioritizing transparency. 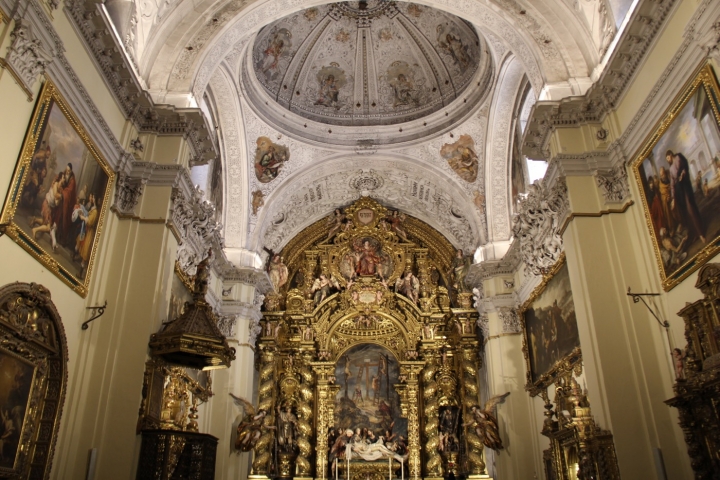 A view of the interior of the church attached to the Hospital de la Caridad in Seville, where a copy of the Bartolomé Esteban Murillo’s “Return of the Prodigal Son” (1667/1670) sits (top, left corner of the image), while the original is held by the National Gallery of Art in Washington DC

Here, an Italian bishop is about to lose his head for practicing his faith, in Mattia Preti’s “Martyrdom of Saint Gennaro” (c. 1685). Nearby, God and a host of angels eject the first biblical couple from paradise for their original sin of theft, in Domenichino’s circa 1626 “The Rebuke of Adam and Eve.” In the same room, Guercino’s biblical paintings “Amnon and Tamar” (1649–50) and “Joseph and Potiphar’s Wife” (1649) hang side by side; the first depicts David’s son raping his half-sister, and the second, Potiphar’s unnamed wife attempting to seduce Joseph and frame him for adultery. 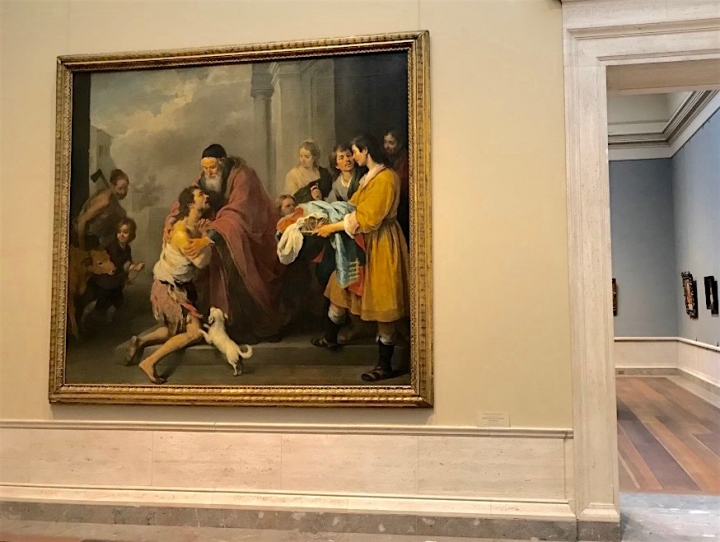 The original painting of Bartolomé Esteban Murillo, “Return of the Prodigal Son” (1667/1670) hanging in the National gallery

When visitors enter an adjacent room and consider Bartolomé Esteban Murillo’s “Return of the Prodigal Son” (1667/1670), they might breathe a sigh of relief. Here is an ostensibly more wholesome picture. The wayward son returns penitent after stealing away from his father, and the latter accepts him with open arms. Murillo even threw in a small, white dog meant to symbolize fidelity, looking up at the ragged son for good measure.

The painting might appear legally kosher, but it has a past that visitors won’t glean from the wall label or the National Gallery website. Some 3,750 miles away in Seville, a troubling story of the painting emerges at the Hospital de la Caridad, for which Murillo originally created it.

“Prodigal Son” was one of six works in a series Murillo painted for the medieval La Santa Caridad (“holy charity”) brotherhood, of which he was a member. The brotherhood cared for travelers and the sick and it buried unclaimed corpses, often the drowned or executed. The series, appropriately, relates to the theme of mercy.

The interior of the church, attached to the hospital, couldn’t be more different from gallery 34 at the National Gallery, where the painting hangs alongside works by Francisco de Zurbarán, Diego Velázquez, and other European painters of the 17th and 18th centuries.

In Seville, paintings cover the church’s walls, and the pews face an altar installed beneath a cupola. Smaller retables contain depictions of the Virgin of charity and the Christ of charity while the main retable is part of a dizzying display of gold and painted detail. To the left (facing the altar), a stunning iron and wood pulpit is installed against the wall; a demonic figure — symbolizing evil — is carved into the underside of the stairs.

Just two of the Murillos hanging in the church are real. The other four, including “Prodigal Son” are copies that represent works looted during the French conquest of Spain. In 1810, Nicolas-Jean de Dieu Soult, the French duke who occupied Seville, took several artworks and shipped them to Paris — the Murillo paintings among them.

The English catalog being sold in the Caridad shop refers to the four as “stolen.” The absence of the works, it adds, alters the message of the church, which was designed by a Seville aristocrat named Don Miguel Mañara Vicentelo de Leca who was appointed hermano mayor (chief brother) of the brotherhood in 1663.

Mañara, who oversaw the church’s completion in 1670 and created the hospital, designed the church’s pictorial program that was intended “to show the way to heaven to the brothers of La Santa Caridad,” according to the catalog. “[It] indicates clearly that the path to salvation can only be reached by accomplishing works of mercy, in one word, by practicing charity.”

“Their present dispersal makes it impossible to read the entire message designed by Don Miguel Mañara for the church interior,” the guide adds. To mitigate this situation, the guide tells us that “In the place of Murillo’s paintings, there are four copies of the stolen ones,” currently hanging in the church, and that they were hand painted in 2007.

Prior to Soult looting the works, they were part of some 1,000 paintings designated for a royal collection in Madrid, explains Ignacio Cano, of Seville’s Museo de Bellas Artes. New legislation in 1810 decreed that the collections of male religious orders, which had been recently dissolved, be stored in Seville’s Alcázar (the royal palace), which is where the Murillo canvases went.

“The aim was to make a selection for the National Museum of Paintings in Madrid and to make a present to the emperor with the most qualified paintings,” Cano said. “But against this project, Marshal Soult, chief  general of Napoleon’s army in Spain, entered the Alcázar and looted to his own government a selection of paintings, including Murillo’s paintings, which he took to Paris.”

The Caridad brotherhood absolutely refused to have the works moved to Madrid for display in the national museum and petitioned Manuel Godoy, then Spain’s prime minister, for assistance. So copies were ordered for the national museum, and the Murillos returned to the hospital. “It’s easy to see that the owners didn’t want to say goodbye to the paintings,” Cano said. “They managed to keep the paintings in their places, but a few years later, they were moved by the French government.” (In other words, Marshal Soult simply came in and took them.) Besides the French theft, Cano has his own questions about the original order: “I’m not sure the decree of dissolution of religious orders had to include a hospital, which was founded by a knight with his own fortune, with the object of attending to poor and old people and to bury them correctly,” he said.

A very different, and truncated, version of these events appears on the website of Washington’s National Gallery in the provenance section for the “Prodigal Son” canvas. “Commissioned for the Hospital de la Caridad [Hospital of Charity], Seville,” it begins, “removed by government decree to Alcázar, Seville, 1810, from whence it was taken to Paris in 1812 by Marshal Nicolas Jean de Dieu Soult, Duke of Dalmatia [1769-1851].”

Readers might assume that means removal by Spanish government decree, rather than by the occupying French government, which begs the question not only whether Murillo’s “Return of the Prodigal Son” should have its own return home to Seville, but also what museums’ responsibilities are in describing provenances.

The three other looted works are similarly de-contextualized on the websites of the institutions that now own them:

“The National Gallery has a long standing and very cordial relationship with the Caridad,” said press and PR manager, Tracy Jones, who noted that the full “Christ Healing” provenance is published in a 1970 print catalog titled “The Spanish School.” The work, according to that catalog, was “appropriated” by Soult.

Neither the hospital nor the city of Seville has asked that the painting be returned, says Christopher Etheridge, the National Gallery’s associate curator of European and American art. “It is necessary to study such issues in historical terms and to recognize the complexity of this history,” he said. Charles IV of Spain first had the work removed from the hospital around the year 1800. The work was supposed to go to Madrid’s royal collection, with a copy returning to the hospital, “indicating a change in the painting’s status from object of devotion to art work that is characteristic of the century to come,” Etheridge stated.

That project wasn’t realized, so the painting returned to Seville, only for it to be removed again by order of Joseph Bonaparte — for a different museum this time. “The work then passed from collector to collector until it was acquired by a public institution; its companion pieces have similar histories,” Etheridge explained. “This is not uncommon: museums around the world hold works intended for other locations.”

“Our duty is to preserve the work, to make it available to the public, to loan it to other institutions for exhibition, to study it, and to share research,” he added.

Back in Seville, the two other works in Murillo’s series — “St. John of God Carrying a Sick Man” and “St. Elizabeth of Hungary Healing Those With Scurf (Scabs),” both of which have been dated 1672 — remain in the Caridad church. 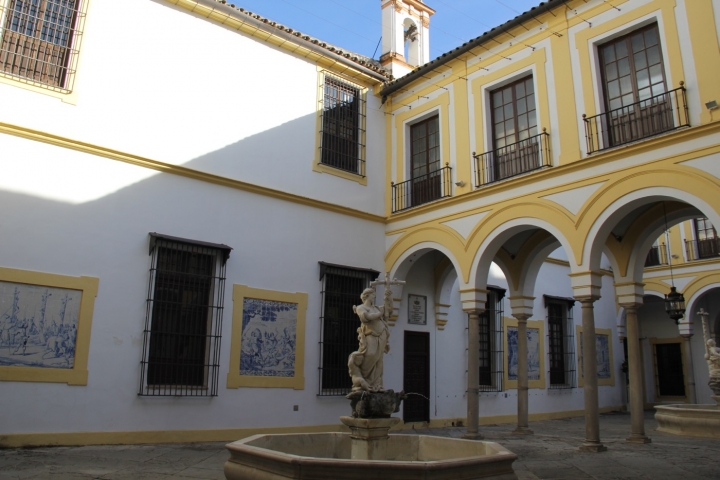 On a tour of Seville late last year, guide Moises Hassan-Amselem reflected on the difficult question of whether the looted works should be returned to Seville. “The Spanish people were, and continue to be, cheated out of their cultural heritage,” he said, but on the other hand, another piece that was looted by Soult, Murillo’s “The Immaculate Conception of Los Venerables” (c. 1678), remains in Madrid at the Prado Museum.

“Why hasn’t Madrid returned the work to Seville,” Hassan-Amselem wondered, “and what message does it send to other nations if Spain hasn’t returned a work to Seville that’s already in the country?”

On its website, the Prado notes that the “Immaculate Conception” was “acquired by the Hospital de los Venerables Sacerdotes in Seville, 1686,” after which it went to Seville’s Alcázar in 1810, and then to Paris as part of the “Marshal Soult Collection.” In 1852, the Musée du Louvre acquired it, and in 1941, the work “entered the Museo del Prado though an exchange with the French government.”

Among all the descriptions on all the different museum websites, there are a lot of variations on the same theme, but there isn’t very much in the way of assuming responsibility or prioritizing transparency. And there’s certainly a gap between the ways that works looted during World War II — which often dominate international newspaper headlines — are discussed and the discussion of works looted under other circumstances.

In Ottawa, the National Gallery hopes to make more of this kind of information available on its website, “not simply for this painting, but for all the works in the collection,” said associate curator Etheridge. “This is a challenging project: We need to assess, correct, and bring the existing catalogue entries up to date; many more works require study, and our website would need to be redesigned,” he said. “At present, we are prioritizing works with gaps in provenance during the Nazi era, 1933–45.”

In this digital era, in which visitors can search for context on their phones as they engage with works of art in person at a museum, it’s a golden age of provenances in one sense. But at the same time, visitors often aren’t aware that there might be a troubling story lurking behind the works that hang on museum walls. At least for now, this is an example of a scenario in which there simply isn’t an app for that yet.