Old Master landscape looted by Nazis comes back on the market 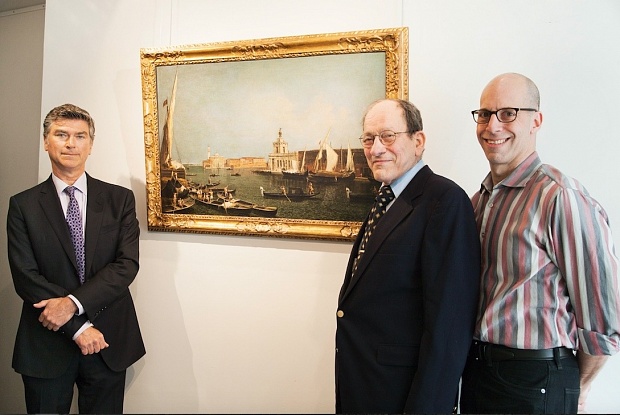 After a decades-long recovery effort that recently ended in a restitution agreement, an Old Master landscape looted by the Nazis will come to auction at Sotheby's London on 5 July. The proceeds from the sale of Michele Marieschi’s La Punta della Dogana e san Giorgio Maggiore (1739-1740), estimated between £500,000 and £700,000, will be shared between the heirs of the Jewish-Austrian couple that fled Europe and eventually settled in New York and the trust of its most recent unnamed owner who bought the work in London in 1953, and died in 2013.

The painting is a rich Venetian scene of the Grand Canal showing the Punta della Dogana and the Church of San Giorgio in the distance, and of course plenty of gondolas. The work's original owners, Heinrich and Anna Maria Graf of Vienna, bought it in 1937, but left it behind a year later with their other possessions following the Anschluss. Escaping across Europe with their twin daughters, the family eventually made its way to Queens in 1942.

What happened to the painting after the war is uncertain. Heinrich Graf filed a claim for the missing work in Austria in 1946. The work was sold at auction in London in 1952 and later bought by the current consigner from a private dealer in the city. In 1998, two of Graf's daughters turned to the Art Loss Register to track down the work, and posted an advertisement seeking assistance in The Art Newspaper.

The new owner fought attempts to be identified through dealers or auction, in the intervening years, although the work’s location was known to insiders. In 2015, the owners trust reached out to the Graf family with the help of another firm, Art Recovery International. It will now be sold through a profit-sharing agreement.

“Michele Marieschi created this magnificent view of the Dogana to give pleasure," the Graf's son-in-law Stephen Tauber said in a statement. "We are sad that Heinz and Anny Graf enjoyed that privilege for just a few months after they had bought the painting with so much anticipation. We are glad, however, that after so many years members of our family are finally able to become reacquainted with the painting, which will surely give pleasure to others for years to come."

Restitutions from this period of German history have become ever more common in recent years; last year, the collector Leonard Lauder announced that the heirs of the original owner’s of Karl Schmidt-Rottluff’s Nude would be paid fair market value so the work could stay in his private museum, the Neue Galerie. Tracking down the works’ origins can be difficult for, however, which is where services like Art Recovery International come in.

Richard Aronowitz, Sotheby’s head of restitution, said, “Having followed the story and been involved in the discussions of this marvellous painting for more than a decade, I am delighted that its turbulent history has now been resolved with a settlement between the Graf heirs and the current possessors, and that it will be offered as one of the highlights of Sotheby’s summer sale."

As well as the Old Master sales in London, Sotheby's is gearing up for a busy summer in New York. On 21 June, it will offer Wassily Kandinsky’s Murnau — Landschaft mit grünem Haus (1909) estimated between $20m and $30m, and his Bild mit weissen Linien (1913) estimated at more than $35m. Along with Joan Miró’s Femme et oiseaux (1940), estimated to sell for more than $30m and Alberto Giacometti’s golden Grande Figure (1947), expected to sell for between $20m and $30m, it should be a sale to watch.