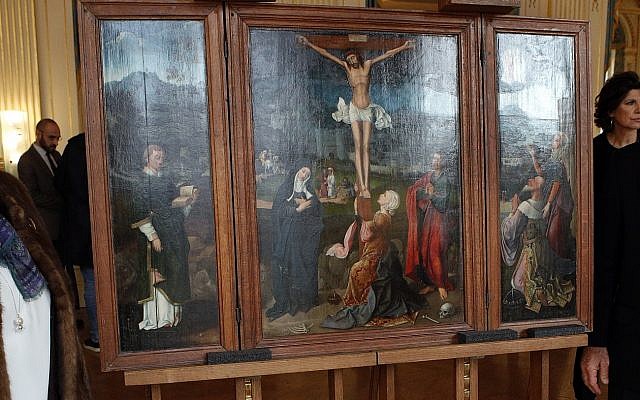 Illustrative: Oil work entitled 'Triptych of the Crucifixion' attributed to Flemish painter Joachim Patinir during a ceremony of restitution at Culture ministry in Paris, Monday, Feb. 12, 2018

An internal French government report has criticized the “inefficiency and lack of ambition” of official efforts to return art looted from Jews during World War II.

The report, seen by AFP, was commissioned by the country’s last culture minister and is scathing about the “40 years of inaction” over thousands of artworks confiscated from Jews during the Nazi occupation or which they were forced to sell for less than their real value.

“The state and the national museums in particular are paying for 40 years of inaction,” said its author David Zivie, a top civil servant and heritage expert.

France has stepped up its efforts in recent years to return looted art to its rightful owners, using genealogical experts to trace families.

But the report said even this was “insufficient because of the lack of coordination, management and visibility.”

Zivie urged the government to set up a special service dedicated to returning the art, with some 2,108 objects that once belonged to Jews still in national collections.

He suggested that as a “symbolic gesture,” artworks whose ownership cannot be established even after intensive research should be handed over administratively to the Jewish History Museum in Paris.

Zivie said progress on identifying the families of the original owners had been so slow that only 35 works had been returned since the last major report on the issue 17 years ago.

It is thought that up to 100,000 works of art, and millions of books, were stolen from French Jews, or Jews who had fled to France before the German occupation.

The Allies found around 60,000 of the missing artworks after the war in Germany and returned them to France.

Two-thirds were returned to their original owners by 1950, the report found.

Some of the rest were eventually sold on by the state except for more than 2,000 pieces which were retained in French museums because of their artistic quality.

A commission of experts, historians and archivists was set up in 2013 dedicated to resolving the problem, but progress has been slow.

In February, France returned three paintings by the Flemish master Joachim Patinir to the descendants of the Bromberg family, who were forced to sell them as they fled the Nazis.

Two years previously it handed over another 16th-century painting to the family, “Portrait of a Man,” by one of the followers of Antwerp artist Joos van Cleve.

The report said that a new system for dealing with looted Jewish art could be used as a model for French museums to deal with the restitution of art taken from its former empire in controversial circumstances.

French President Emmanuel Macron has asked French art historian Benedicte Savoy and the Senegalese writer and economist Felwine Sarr to examine the background of African art in French museums. They are due to report in November.