Dutch golden age painting looted by Nazis to be auctioned

The Oyster Meal by Jacob Ochtervelt was returned to descendants of original owner, who have decided to sell 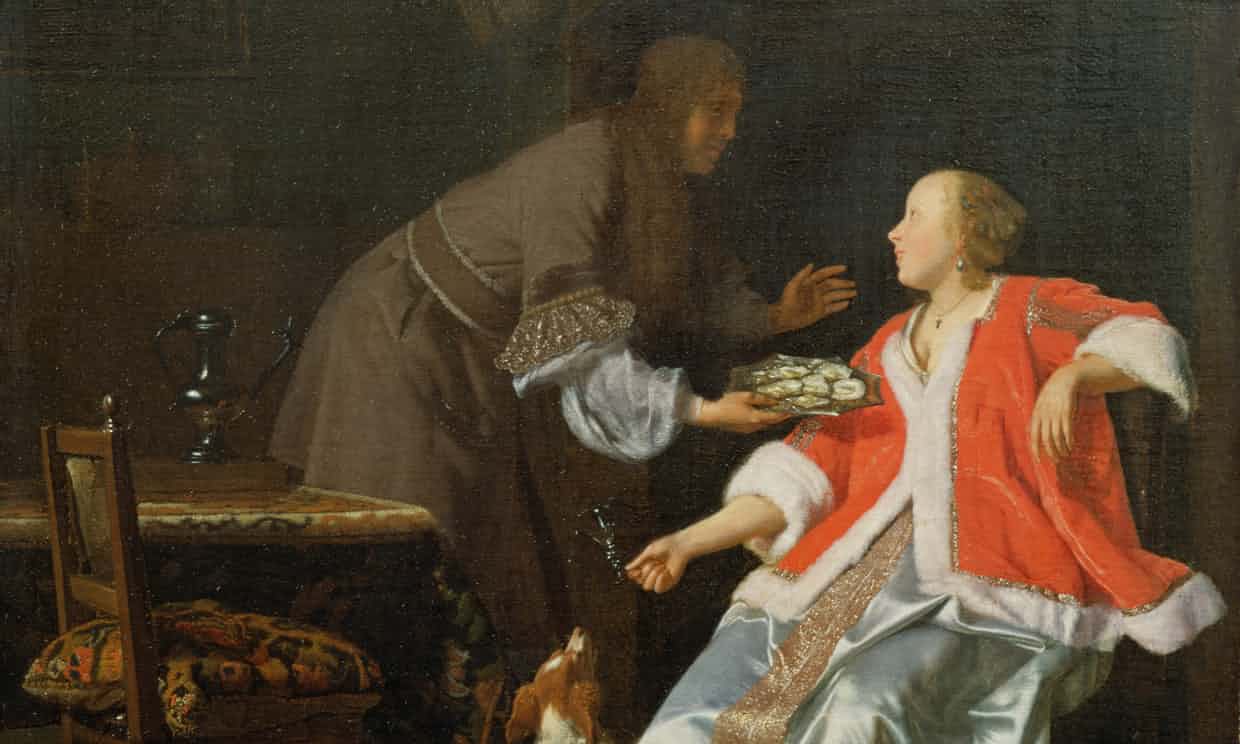 The Oyster Meal, depicting a scene of seduction, is to be sold in London on 4 July.

A Dutch golden age painting looted by the Nazis from a bank vault and displayed for 30 years in London’s Mansion House is to be auctioned at Sotheby’s.

Jacob Ochtervelt’s The Oyster Meal was returned to the family of its original owner by the City of London Corporation last November. George Gordon, the co-chair of the auction house’s Old Masters paintings and drawings department, said it was one of the finest works in existence by the 17th century artist.

“This painting is an eloquent manifesto of his genius, and shows us so clearly why he was a genre painter of the first rank alongside Johannes Vermeer, Pieter de Hooch and Gabriël Metsu.”

The sale also shines a light on the work’s fascinating history. It was part of a collection owned by a Dutch family who lived in Arnhem, the town with the bridge which the allies failed to seize in Operation Market Garden. The failure was immortalised in the book and war film A Bridge Too Far.

The Oyster Meal was one of a number of paintings owned by Joan Hendrik Smidt van Gelder, an art-loving doctor who was in charge of the children’s hospital in Arnhem.

Ochtervelt’s piece, which hung in the patients’ waiting room, and 13 other paintings were stored in a bank vault during the second world war. All were looted by the Nazis in 1945 after Allied troops were forced to retreat following the battle of Arnhem.

Most of the works have been recovered, but six had been missing for 70 years including, until last year, The Oyster Meal.

The discovery of the painting came about as a result of research by the London-based Commission for Looted Art in Europe, who represent the family. Co-chair Anne Webber identified the painting and arranged for Smidt van Gelder’s family to make a discreet visit to Mansion House.

Webber discovered it had been bequeathed to the Corporation of London in 1987 by the property entrepreneur Harold Samuel, later Lord Samuel of Wych Cross. It had previously been owned by a US diplomat, J William Middendorf, who bought it in Zurich in 1967. Before that the piece was in Düsseldorf.

Webber said: “This beautiful painting has a remarkable history and its quality reflects that of Dr Smidt van Gelder’s collection in its entirety. The quest to recover it took us on a journey from Holland to Germany, Switzerland and the US, culminating in our discovery of the work so close to home.”

The painting, a scene of seduction in which a loved-up young man offers oysters to a well dressed young woman, will be sold by Sotheby’s in London on 4 July. It is expected to fetch between £1.5m and £2.5m.

The painting has an impressive provenance. Before entering the collection of Smidt van Gelder its owners included one of 19th-century France’s most influential art patrons, the Comte de Mornay, half brother to Napoléon III, and the Dutch financier Henri Louis Bischoffsheim.

Bischoff van Heemskerck said she vividly remembered The Oyster Meal hanging in her family home in Arnhem. “The painting’s recovery after so many years has been very meaningful to my family. For me, it brought to life again my father and his extraordinary collection, while also recollecting the heroic efforts of the Allies which helped save our way of life.”