An Old Master painting restored to the family of its original Jewish owner will be offered at Sotheby’s next week with an estimate of £3m-4m. 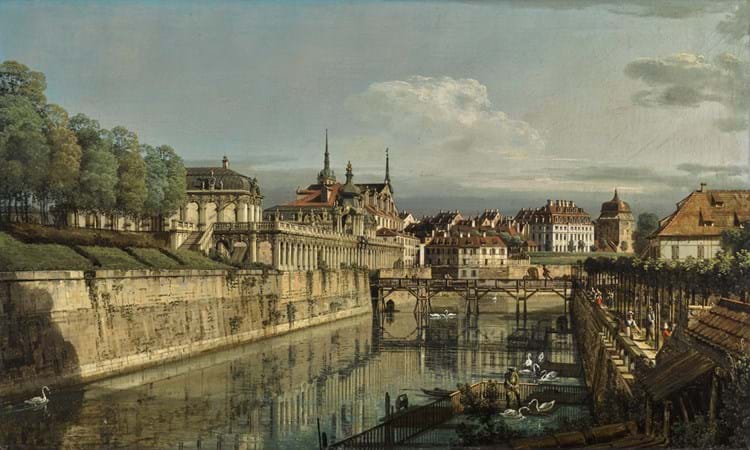 Dresden, A View of the Moat of the Zwinger’ by Bernardo Bellotto – estimated at £3m-4m at Sotheby’s.

The view of Dresden from c.1758 was painted by Bernardo Bellotto (1721-1780), the Venetian artist who was the nephew of the great Canaletto (1697-1768). It is appearing at auction after it was returned by the German government to the heirs of retail magnet and art collector Max Emden.

Emden, a colourful character who was described by Sotheby’s as a “successful and exuberant businessman whose collection was once the envy of Europe”, bought the painting sometime between 1928-30. He also owned works by the likes of Monet, van Gogh and Renoir.

A founder of Berlin's KaDeWe department store (which later expanded to Italy, Hungary and Scandinavia), Emden acquired the two Brissago Islands in the Swiss sector of Lake Maggiore, building a house in classical style where he held exotic parties and, as a committed naturist, encouraged like-minded guests to water-ski and dance naked in the garden.

But things became darker for Emden in the 1930s. With the rise of the Nazis, he left Hamburg in 1933 and became a Swizz citizen. Within two years his businesses, properties and financial assets in Germany, including much of his art collection, was seized.

By 1937 he was nearly insolvent and had to sell the remnants of his art collection kept on Brissago Island. In June 1938, art dealer Anna Caspari arranged the sale of two Bellotto paintings – including the view of Dresden – to Karl Haberstock, another dealer who was supplying artworks to Adolf Hitler for the planned Führermuseum in Linz.

Emden died in 1940 and the island and house were acquired by three local cantons. His son was arrested by the Gestapo but managed to escape to Chile where family members remain today.

After the Second World War, the Dresden painting was among the large number of artworks seized by Allied troops. It later entered the German federal government collection in the 1960s and was hung in the residence of successive German presidents in Bonn for many decades thereafter. However, after learning its history, President Horst Köhler had it removed from the residence in 2005 and it was then placed on permanent loan to the Militärhistorisches Museum in Dresden.

Emden’s descendants had been trying to recover the picture for some time and, after a recommendation from a German restitution commission last year, it was finally restored to them last year. The commission’s findings included that the Bellotto was sold below market value in 1938 and there was no evidence that Emden ever received the proceeds of the sale.

Emden's grandson, Juan Carlos Emden, said: “The paintings were sold out of need but also due to pressure and persecution.”

The work itself shows the moat of the Zwinger, a palatial Baroque complex in Dresden which is probably the city’s most famous building. The 19in x 2ft 8in (48 x 80cm) oil on canvas relates to a larger painting for which Bellotto was commissioned by Augustus III (1696-1763), son of Frederick Augustus I, Elector of Saxony.

Indeed, Bellotto executed 14 large and topographically precise views of the city during his 11-year stay in Dresden where he received an annual salary of 1750 thalers – the highest ever paid by the king to any painter.

This particular smaller-scale scene shows the view from the royal orangery, looking towards the old city, and includes some of Dresden’s most famous landmarks at the time.

Up until 1925, it was recorded in the private collection of the Duke of Saxe-Anhalt, before it came to the open market in Berlin where it was acquired by Emden.

Sotheby’s head of Old Master paintings Andrew Fletcher said: “Bellotto’s unusual view so beautifully contrasts Dresden’s glittering baroque architecture with its more austere medieval past, bathed in the artist’s signature crisp, cool light. In near-perfect condition, it is a great privilege to be handling the sale of this small masterpiece.”

The work will be offered at Sotheby’s cross-category evening sale in London on July 28, where it will appear alongside a portrait by Rembrandt as well as more modern works by artists such as Joan Miró, Francis Bacon and Henri Matisse.

Another vedute restituted to the heirs of Emden by the German government in 2019, Vienna, a View of the Karlskirche, will appear at Sotheby’s Old Master day sale, an online auction running from July 20-29. Ascribed to Bernardo Bellotto and Studio, it is estimated at £150,000 -200,000.