A Dispute Over a Pissarro Painting Looted by Nazis Was Settled Four Years Ago. Now, It’s Going Back to Court

An agreement reached in 2016 is now again up for legal wrangling. 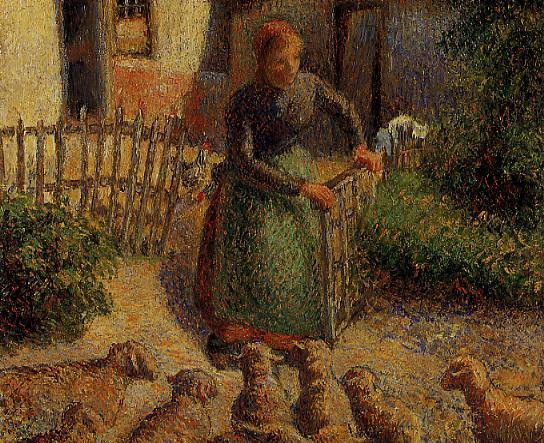 French Holocaust survivor Léone Meyer, who fought for years for the restitution of a Camille Pissarro work from her late father’s collection and ultimately agreed to let the painting split time between the US and France as part of a settlement, is trying to change the terms of the deal.

The Fred Jones Jr. Museum of Art at the University of Oklahoma had agreed to transfer ownership of the work to Meyer under the condition that the 1886 canvas, La bergère rentrant des moutons (Shepherdess Bringing in Sheep), would return to the university after five years on display in France.

Moving forward, the painting would spend alternating three-year stints at the Oklahoma institution and a French museum of Meyer’s choice.

Meyer, now 80, picked the Musée d’Orsay in Paris, where the painting is currently on view. But the museum declined to add it to its permanent collection, citing the high costs and inherent risk of shuttling the artwork back and forth across the Atlantic every few years.

Her lawyer, Ron Soffer, told the New York Times that other French museums will likely feel the same way, and he has now filed a lawsuit in France seeking to bar the painting’s planned return to the US in February.

“This is a case that involves Nazi occupation in France. It should be settled by the French courts,” Soffer told Artnet News. “Should she prevail in this legal dispute, madame Meyer intends to gift this painting to the Musee D’Orsay, as she has attempted to do in the past.”

“It is disappointing that she is actively working to renege on the agreement,” university president Joseph Harroz Jr. and University of Oklahoma Foundation president and chief executive Guy Patton said in a joint statement, adding that the agreement between the two parties had been “heralded as a first-of-its-kind US-France international art sharing agreement.”

Previously, Meyer and the Musée d’Orsay had offered to organize a loan exhibition to the Fred Jones Jr. Museum, featuring loans of work by artists including Pierre-Auguste Renoir, in lieu of rotating Transatlantic displays of the Pissarro.

Meyer’s new case, which is scheduled to be heard in January, cites a French court ruling from July finding that anyone in possession of stolen art—in this case, Fred Jones Jr. Museum—must return it free of charge.

In 2017, France seized another Pissarro, La cueillette des pois (The Pea Harvest), when American collector Bruce Toll loaned it to Paris’s Marmottan Museum. This summer’s French High Court decision upheld the restitution of the work to the heirs of Simon Bauer, whose art collection was stolen by the Nazis. (Soffer represents Toll, who is currently suing France to compensate him for the loss of the $1.7 million canvas.)

Meyer’s Pissarro was purchased by Oklahoma oil baron Aaron Weitzenhoffer at a New York art gallery after Meyer’s father, Raoul, had it taken by Nazis after he fled to the US during World War II.

It came into the possession of the Fred Jones Jr. Museum after Weitzenhoffer’s widow donated it, along with 33 other artworks, in 2000.

When Meyer learned of the painting’s whereabouts in 2012, she started a three-year legal battle during which Oklahoma legislators passed a non-binding resolution calling on the university to return the artwork.

“Why would the University of Oklahoma want to exhibit a painting that was stolen by the Nazis?” Soffer asked. “What kind of a message does it send to their students?”