'Selfless hero' Edward 'Teddy' Dixon was born in New York but his family moved to Belfast when he was a young child.

Due to his being born in US, Mr Nixon's name came up in the draft in 1944 and he served as an infantryman in the 42nd Infantry 'Rainbow' Division.

There, he helped liberate 33,000 people kept in the Dachau Concentration Camp - where more than 188,000 political prisoners, Jews and other groups persecuted by the Nazis were held since it opened in 1933.

Mr Dixon also played a role in the recovery of a treasure trove of looted art stored in salt mines during the conflict.

The rescuing of the cultural treasures damaged or looted by the Nazis was later brought to life in the 2014 movie The Monuments Men, starring Hollywood heavyweights George Clooney, Matt Damon, Cate Blanchett and Bill Murray. 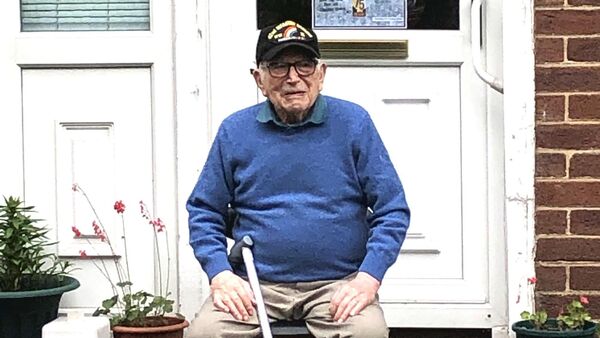 Edward 'Teddy' Dixon (pictured above) was born in New York but his family moved to Belfast when he was a young child. He landed in France with his unit in December 1944 (pictured below) 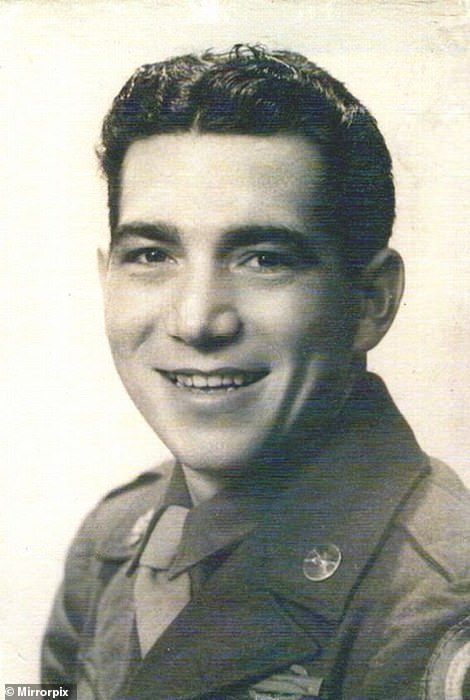 As well as helping to liberate the Nazi concentration camp near Munich - which was used as a labor camp and place where medical experiments took place - he also played a role in the recovery of a treasure trove of looted art stored in salt mines during the conflict.

Mr Dixon was told that he would be part of a squad of men responsible for guarding German POWs.

He later discovered that those prisoners were given the task of salvaging looted Nazi artwork which was hidden 700 feet deep in the bowels of the Kochendorf salt mine in Germany.

Four carts filled filled with the precious artefacts were wheeled up through the mine every day during the 14 day missing.

The artefacts discovered were invaluable.

Just one cache of stolen paintings contained 900 stolen works, among them the precious Stuppach Madonna, a medieval panel painting of the baby Jesus and Mary by German artist Grunewald. All had been stashed by Hitler's troops after their rampage across Europe.

Their value was incalculable - one, alone, a self-portrait by Italian artist Raphael, was valued at £60million in 2014.

In an interview with the BBC, Mr Dixon said: 'It was fantastic to see all the cases piled up there.

'We had head lamps on us. They were neatly stacked around the walls, heavily encased in wood.'

The rescuing of the cultural treasures damaged or looted by the Nazis was brought to life in George Clooney's 2014 film The Monuments Men.

The film follows the work of the 345 men and women from 14 countries who were part of the Monuments, Fine Arts and Archives (MFAA).

The MFAA was set up at the instigation of US curators and Franklin Roosevelt in a bid to protect European culture and art from the ravages of war and looting by the Nazis.

The rag-tag group was co-opted into the armed forces and sent into Europe following D-Day in 1944 on the greatest treasure hunt of all time, to recover and return the pieces of art to their rightful owners and reverse the cultural attack of an entire continent. 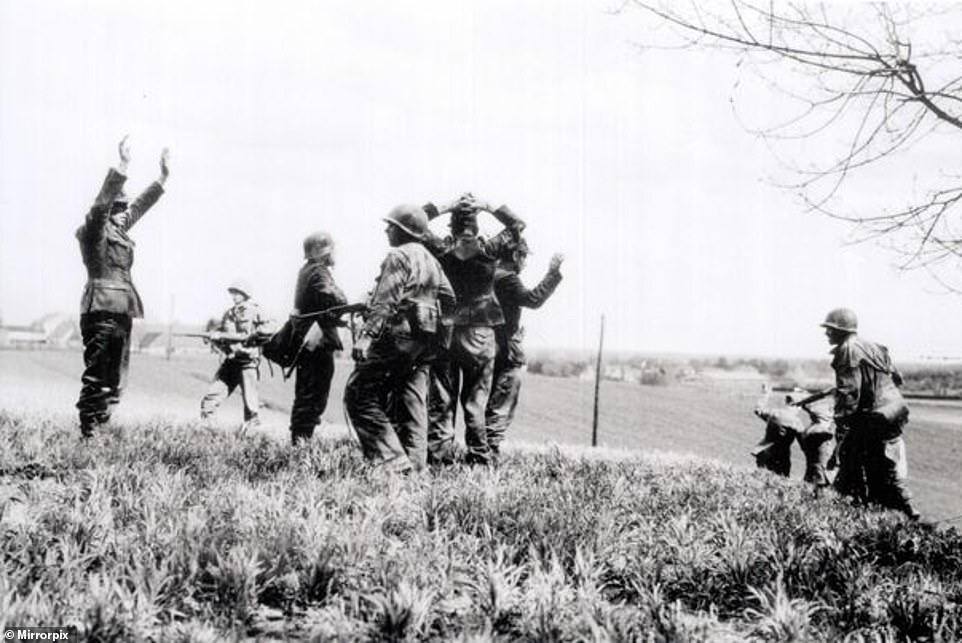 He served in the US army as an infantryman in the 42nd Infantry 'Rainbow' Division and went on to help liberate the Dachau concentration camp (Mr Dixon, pictured centre with the gun, capturing SS guards) 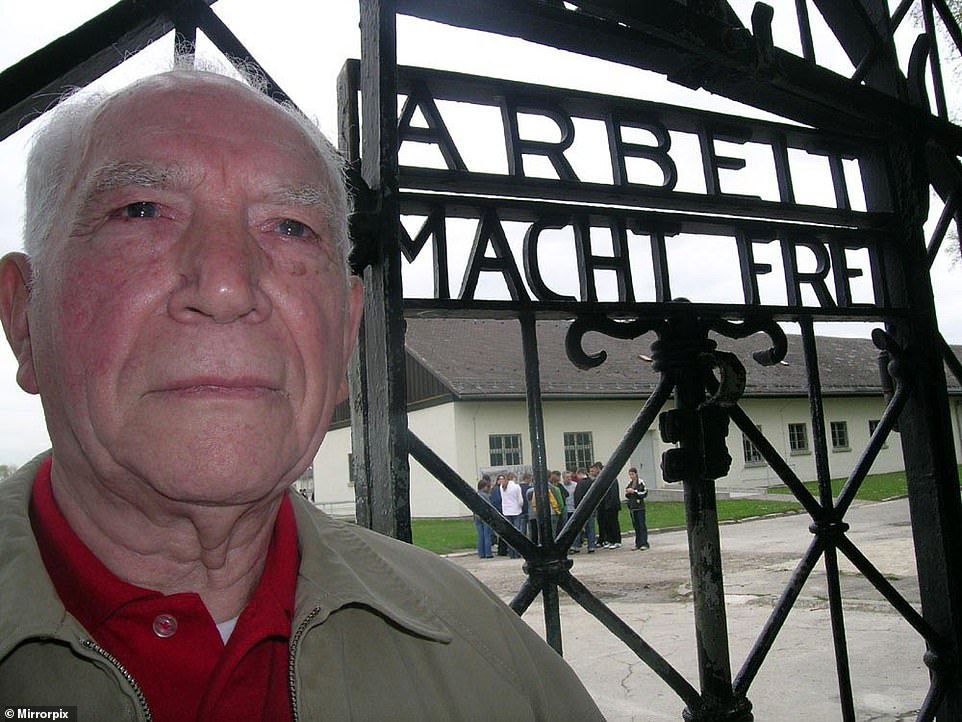 Mr Dixon helped liberate 33,000 people kept in the Dachau Concentration Camp (pictured during his return to the camp) - where more than 188,000 political prisoners, Jews and other groups persecuted by the Nazis were held since it opened in 1933

'After liberating 33,000 people from the horrors of Dachau concentration camp, he returned to East Belfast a hero.

'We will remember his service and selfless heroism.'

Mr Brooks tweeted: 'My generation will never know the fullness of the debt we owe to men like Teddy who risked all to defeat the Nazis. A hero.'

Mr Dixon's death comes less than a week after the passing of his friend and fellow war veteran Bill Eames, from Enniskillen, Co Fermanagh.

Mr Eames, 97, served as an RAF pilot and was involved in the securing of Pegasus Bridge in 1944, among many other missions.

Mr Dixon had been posted near the Austrian village of Hallein in 1945 when he recovered the treasure in the mine shaft.

He and the other men in his squad were told they would be guarding German prisoners of war, reports the BBC.

These prisoners were actually being sent to retrieve art looted by the Nazis and hidden in the local salt mine.

Every day for two weeks they took the prisoners into the mine, loaded up four small carts and pushed them back up the rails to the mine head.

He said that the cases were all piled up in the mine and they were 'neatly stacked' around the walls, 'encased in wood'.

Military policemen loading the art into lorries and took it to Salzburg castle for safe-keeping. 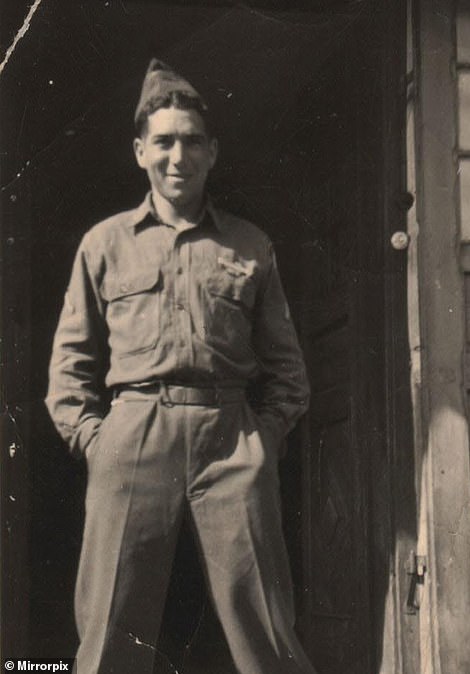 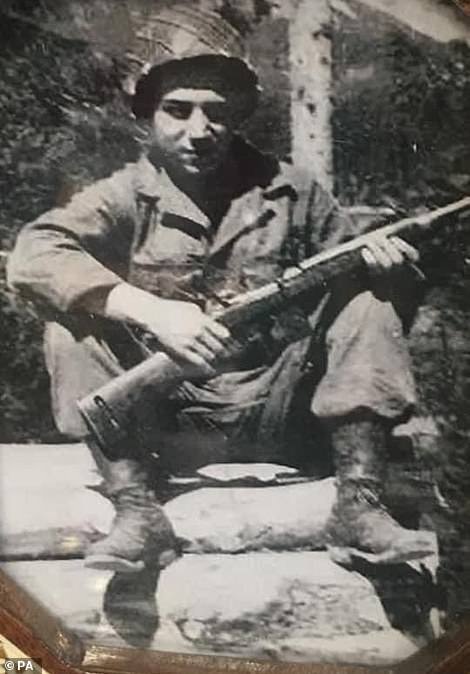 As well as helping to liberate the Nazi concentration camp near Munich, Mr Dixon also played a role in the recovery of a treasure trove of looted art stored in salt mines during the conflict

He described getting to know both men very well over the years through telling their stories.

He said: 'Because of Bill and Teddy – and their generation, people of my generation, and others who came after me have never had to go to war.

'We owe those gentlemen and their generation a debt of gratitude that we can never adequately repay. We forget that generation at our peril, otherwise we are going to be repeating the past again and again.'

He described both men as very humble, and passionate about education.

Mr Clark added: 'They tended to be together at a lot of commemorative events because they were almost the last of that generation.

'What really struck me about them was their passion for education, they made sure that any time they got an invitation to talk at a school or to talk to young people, they were always very keen to accept so they could listen to and talk to the children, wanting to make sure they were aware of the past.'

On the night of 5 June 1944, 181 men, led by Major John Howard, took off from RAF Tarrant Rushton in Dorset, in six Horsa gliders in a bid to capture Bénouville Bridge in northern France.

It was the first strategic target of Operation Deadstick, the codename for the airborne part of the Normandy landings.

The objective of the dangerous mission was to prevent German armoured vehicles from crossing the bridges and attacking the thousands of troops who were landing at Sword Beach the morning after.

Just after midnight, the battalion landed yards away from the bridge and set up their defences, ready for the onslaught by Hitler's forces.

The attackers poured out of their battered gliders, completely surprising the German defenders, and took the bridge within 10 minutes.

Most of the soldiers in this glider moved through German lines towards the village of Ranville where they eventually re-joined British forces already stationed in the north of the country.

After the sucessful operation, the crossing was renamed Pegasus Bridge, derived from the emblem worn by British soldiers during the assault.

Near the bridge is Cafe Gondree, the first building in Nazi-occupied France to be liberated in 1944, one of the crucial steps towards Allied victory in the Second World War.

The events that unfolded in Dachau continue to haunt the world 81 years after it first opened its gates on March 22, 1933.

More than 188,000 political prisoners, Jews and other groups persecuted by the Nazis were kept in Dachau, which was used as a labor camp and place where medical experiments took place.

There were 32,000 documented deaths - and countless others went unrecorded.

Prisoners were forced to do manual labour. This started as construction work to increase the camp's size but it later became producing German military equipment.

The prison was also used as a place where medical experiments took place.

Scientists working for the Nazis would look at how atmospheric pressure and freezing affected inmates.

They tested experimental drugs by infected inmates with malaria and tuberculosis.

Horrific images from inside the camp show drainage ditches to catch the blood of victims - as well as the camp's gas chambers.

Prayer scarves and wreaths laid at memorials to the prisoners who were cremated, and the 4,000 Soviet soldiers killed there by firing squads, were also seen.

In a final act of cruelty, guards at the camp forced more than 7,000 prisoners, most of them Jewish, on a death march as American troops drew close in April 1945.

Many of the starved and weak prisoners who struggled to keep up were shot dead. Those who survived were liberated by the Allies in May.