Romanian Jews Try to Halt US Auction of Historic Document

The Jewish community in Cluj in Romania urged a New York auction house to halt the sale of a valuable 19th Century memorial register of burials that it believes was stolen during World War II.

The Jewish community in Cluj in Northern Transylvania has asked auction house Kestenbaum and Company to halt the sell-off of a 19th Century handwritten memorial register of the city’s Jewish burials that it believes was stolen during the Holocaust, ahead of bidding that is scheduled to take place on Thursday.

The letter from the Jewish community, which has also been published by Romanian magazine Baabel, argues that the register was “illegally appropriated by unidentified persons”.

It argues that because it was stolen, it “falls under the provisions of the 1947 Paris Peace Treaty and the 2009 Declaration of Terezin”.

Signed by 46 states including the US, Romania and Hungary, under whose administration Cluj was during most of WWII, the treaties provide for the restitution to their rightful owners of goods illegally appropriated by states or their citizens.

“According to the aforementioned peace treaty, they should be returned to the ‘community of survivors’, in this case, the Jewish Community of Cluj,” the letter says. 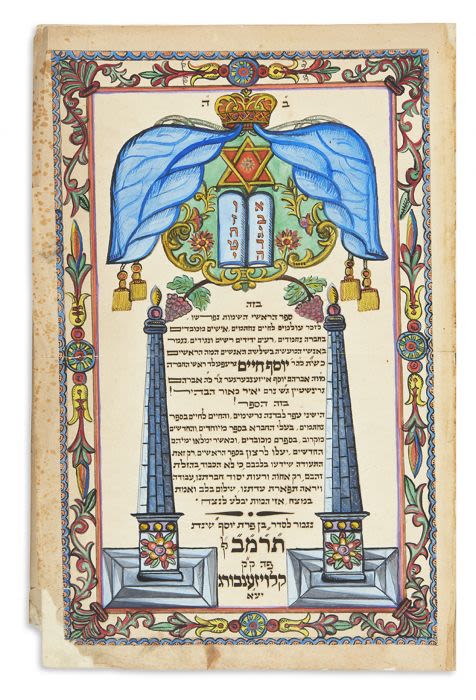 The 19th Century register that is being auctioned.

Robert Schwartz, the president of the Cluj Jewish Community, told BIRN that no answer has been received from the company so far.

“We expect to hear from them in time,” Schwartz said.

Schwartz said the memorial register “belongs to the Jews of Cluj and not to any individual”.

“We don’t want to fight with anyone, we want to find out how it got there, from whom,” he said.

“It might be that it got there from one of us [a member of the community], but I don’t think so,” he added.

He said that he has also approached the World Jewish Restitution Organisation for assistance to recover the document.

Schwartz explained that found out about the register from a genealogist who read about the auction on the internet.

“He told me, ‘Look, you are looking in cemeteries for the graves of those who died because you don’t have the documents, and this is being sold online,’” he recalled.

Besides its historical and artistic value, Schwartz is convinced the register would help in the task of reconstructing the past of a community that saw most of its archives destroyed or pillaged during the Holocaust.

Cluj – known as Klausenberg in German, or Kolozsvár in Hungarian, by most of its Jewish population, who predominantly spoke Hungarian – was home to more than 16,000 Jews before 1944, when 18,000 Jews from the city and its surroundings were deported and most of them killed at the Auschwitz death camp.

The community headed by Schwartz now numbers 400 people, which includes non-Jews who have married into the community and pay their contributions to the institution.