April
ARTnews 3 May 2021
By Angelica Villa 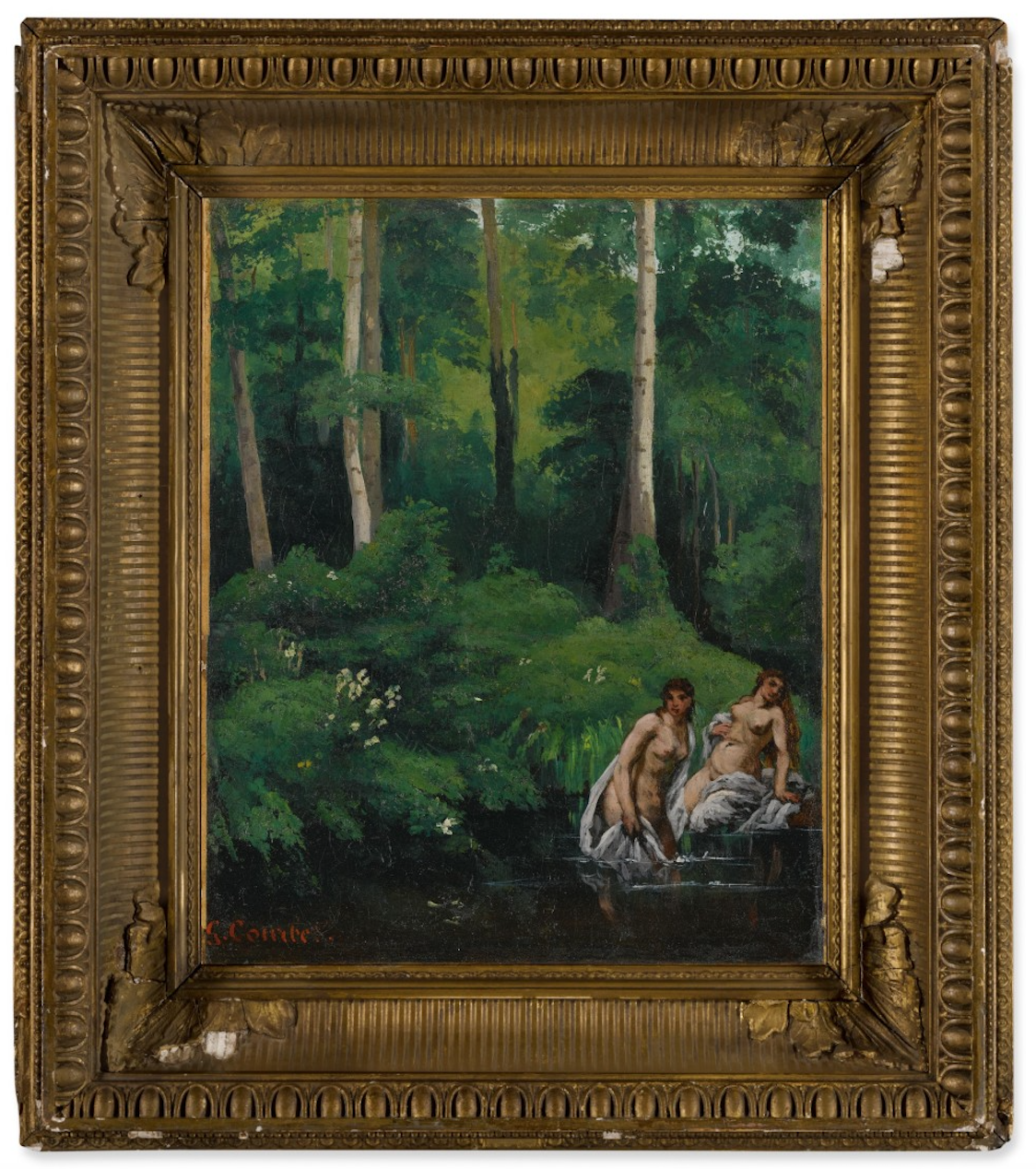 A painting by Gustave Courbet that was confiscated twice from its original Jewish-Hungarian owner is being sold at auction. As part of a settlement agreement between the heirs of Baron Ferenc Hatvany and its most recent owner, the work will be offered in an online sale of Impressionist and modern art at Sotheby’s that will run until May 14. It is expected to fetch a price of $180,000–$250,000.

Courbet’s Baigneuses dans la forêt (1862) depicts two nude bathers amid a verdant forest landscape. The current sale marks its first time on the market since 1908, when the original owner purchased it. The work resurfaced when the previous owner, who is based in Australia, approached the auction house to sell the work.

Sotheby’s brokered the restitution settlement between the owner and Hatvany heirs, who according to their lawyer, Agnes Peresztegi, had been actively searching for the long-lost work. Sotheby’s declined to comment on the terms of the settlement and did not disclose the name of the Australia-based owner.

The painting’s original owner, Baron Ferenc Hatvany, was a prominent Jewish-Hungarian collector active during the 19th and 20th centuries. The son of industrialist and noble Sándor Hatvany-Deutsch, he amassed his fortune through the banking and the sugar industries. Havtany’s collection may have included as many as 800 works, among them pieces by El Greco, Édouard Manet, and Pablo Picasso. He also had a significant collection of Courbet works, with two from his holdings now owned by the Musée d’Orsay in Paris and one now residing with the Museum of Fine Arts in Budapest. “He had an unbelievable eye for collecting works,” Peresztegi told ARTnews.

Amid the aftermath of the 1918 Hungarian revolution and political turmoil in the region, Hatvany became a target of Soviet policy. In 1919, the Courbet was confiscated by the short-lived Hungarian Soviet Republic government and returned to Hatvany sometime before 1923. Two decades later, in 1944, as the Nazi regime descended on Hungary, Hatvany was forced to flee Budapest. Before leaving, as the war escalated, he had tried to secure 350 works from his collection by placing them in three of the city’s bank vaults under the aliases of two employees.

In February 1945, Russian military forces invaded Hungary and looted the painting from Hatvany’s vault at the Hungarian Commercial Bank of Pest. Eventually, it passed into the hands of the current owner at an undisclosed date. “The exact route taken from the bank vault in Pest in 1945 to 2021 is not entirely clear,” said Lucian Simmons, Sotheby’s head of restitution.

Hatvany survived persecution and fled to Paris in 1947. He died in Switzerland in 1958. Three of his descendants, including one of his remaining four children, who is a Holocaust survivor, are the current heirs and beneficiaries of the settlement.

The process of recovering works from Hatvany’s vast original collection has been arduous, but in recent years, Hatvany’s heirs have been successful in recovering other works stolen from the collection. In 2005, the heirs secured the return of Femme nue couchée (1862), which was stolen from one of the bank vaults. It resurfaced in 2000 in the hands of a Slovakian art dealer. In 2014, London’s Tate museum returned John Constable’s painting Beaching a Boat, Brighton to the family. It was sold at Christie’s London in 2016 for £665,000 under a restitution agreement. “While the restitution procedure was tough and long, we have succeeded,” said Peresztegi of the present case.

To this day, works taken from Hatvany’s collection yet to be returned to the heirs remain in the holdings of various institutions, including Moscow’s Pushkin State Museum of Fine Arts, which owns Jacopo Tintoretto’s Portrait of a Venetian Nobleman (ca. 1563–65) and Camille Corot’s Portrait of Madam Gambey (ca. 1869–70), as well as examples by Degas and Manet. “It’s still one of the great collections that has monumental works unrecovered,” said Simmons.