At last, a grandson recovers art lost to the Nazis

Tom Selldorff can remember letters from his grandfather, received when he was a young man, that brimmed with wisdom, altruism, and refinement. “He wrote to me often about the philosophy of society, and the philosophy of art, and how it intersects with the human condition,” Selldorff recently recalled by phone from his home in Needham. “He was always so positive and forward-looking. He was really wonderful that way.” 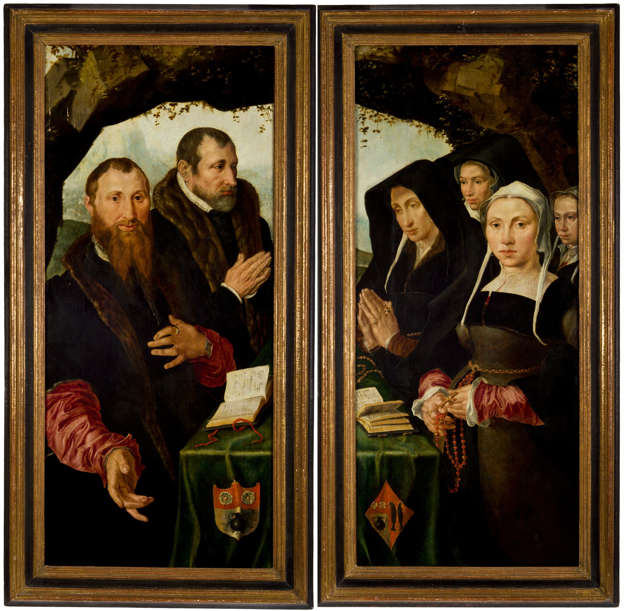 On display at Worcester Art Museum are 14 works from Richard Neumann's vast collection. Highlights include this set of Dutch altar wings, painted by Maerten van Heemskerck

In all his time with his grandfather, Selldorff, now 93, never knew the full story of his family’s journey to the United States, how they fled Austria under advancing Nazi threat in 1939. All he knew was they had escaped, and that his grandfather abandoned the dark specter of the past for the brighter horizons of an American future. It took the death of Selldorff’s mother, in 1980, to learn how much had been lost in that pursuit. She had left to him a suitcase filled with his grandfather’s papers, which documented a remarkable art collection of more than 200 pieces.

In the Worcester Art Museum, 14 of those works now hang in a gallery with aubergine walls, shimmering under low light. They represent most of what Selldorff has managed to recover — so far — of his grandfather’s lifelong passion, scattered to the wind by the Nazi war machine. The exhibition, “What the Nazis Stole from Richard Neumann (and the search to get it back),” is one story among thousands, with untold billions’ worth of art still out there somewhere, out of reach of their rightful owners. (Common estimates suggest that more than 20 percent of the art in Europe was plundered by Nazis.)

The show is emblematic all the same. It’s the story of a brutish agenda to dispossess European Jews of their most prized things, whether to feed the war coffers or to gild the personal residences of senior officials. (Propaganda minister Joseph Goebbels was a particular connoisseur of Renaissance art, apparently, and proudly displayed stolen masterpieces in his home and office.) But the Worcester show is also about the long arc of history, and how even things that are shattered can begin to be made whole.

For Selldorff, it also became an experience of making whole the upbeat, irrepressible grandfather he so respected. “He really was not someone to dwell on misfortune,” Selldorff said. “The collection was something that was in the past, for him, and he never talked about the past.”

What happened to Neumann and his family would test the most resilient of us. Neumann, a chemist by training, became a successful executive for a number of Austrian textile companies, but art was a particular passion. He began collecting works early in his career, and assembled a number of significant pieces. (A set of Dutch altar wings hanging in Worcester, painted by Maerten van Heemskerck around 1540, are sparkling, near perfect examples of devotional art of the northern Renaissance.)

Neumann’s ambition was not just acquisition; he wanted to learn as much as he could, which led to striking up relationships with senior historians and curators at Vienna’s Albertina Museum, many of whom became friends. In 1921, his collection was granted landmark status by the Austrian government, with 28 pieces held up as major works. The Neumann family home in Vienna was a hub of cultural refinement replete with historic art and artifacts, and a host eager to share its many wonders with guests.

A spectral photo of his opulent salon, hanging at the exhibition’s heart, haunts the gallery. In 1938, Adolf Hitler’s ruling Nazi party in Germany unilaterally declared unification (or Anschluss) with Austria. After a brief period of terrorizing the Austrian prime minister, German troops were unopposed as they marched into Austria in March of that year. Hitler orchestrated a rigged referendum a month later that delivered the result he wanted: A majority of Austrians favored union with Nazi Germany. Jews in Austria immediately became subject to Nazi policies. Neumann, then the CEO of a fabric company, was set to be removed from his post under Nazi directives forbidding Jews from leadership.

His employees rallied around him, which allowed him to hang on for a month. But in May of 1938, he and his family swiftly decamped for Paris, hoping to wait out the war there. They managed to secretly take 38 artworks with them. Already, the Nazis had forced Neumann to sell much of his collection, at a fraction of its value, which they stockpiled and planned to liquidate.

In Paris, Neumann made inquiries into the possessions he left behind, all of which were rebuffed. From there, the family watched as the Nazis annexed Poland and the party’s expansionist gaze turned westward to France. In 1942, with the Nazis in control and Jewish deportations from France spiking daily, it was time to go. Neumann liquidated what was left of his collection for a fraction of its worth, to have cash on hand. Sneaking through the unoccupied territory of Vichy into Spain, the family eventually secured passage to Cuba, where they waited out the balance of the war.

Neumann, stripped of his collection, still had his passion. In Havana, he lectured on art history and helped to establish Havana’s Palacio de Bellas Artes. When the war ended, he began to pursue his collection in earnest. American agents had discovered almost a thousand troves of looted art throughout Austria and Germany (these were the “Monuments Men,” made popular by the 2014 movie). Recovered works were collected in depots all over Europe for distribution to various national museums for safekeeping. Some 700,000 pieces were left by the US Army in the care of museums all over Europe, who were charged with getting them home.

It was, to put it mildly, a mess. Claims came in from all over, and by the thousands. Some were swiftly recovered, but few cases were cut-and-dried. Museums, in no hurry to release works without substantial proof of ownership, denied most requests outright. Likewise, Neumann’s first requests to have works returned from Vienna’s Kunsthistorisches Museum in 1950 were denied. As time wore on, museums became less interested in restitution, believing themselves to be the best stewards of the looted works. In the Worcester exhibition, two paintings are displayed on a plinth, displaying fronts as well as backs stamped with “MNR” for Musées Nationaux Récupération (National Museums Recovery), the French national acronym for works arriving from Nazi troves.

In 1951, Neumann and his family moved to New York, where he continued to pursue his collection. Vienna’s restitution commission ruled in his favor in 1952 for six works held by the Kunsthistorisches Museum, including the van Heemskerck panels. But the museum denied Neumann an export license on the grounds that the works were national treasures. Ordered to compensate Neumann, the KHM paid him $3,000, the only restitution he would ever receive. He died in 1959 in New York, with his collection still well beyond his reach.

Decades passed and the trail grew cold before Selldorff, after his mother’s death, would crack open a suitcase and enter an unknown chapter of family history. Little had changed in the intervening years; restitution cases still largely failed, at least in European museums, on the “national treasures” argument that kept Neumann from his works years before.

Then, in 1985, European countries began to release inventories of art they believed to have been confiscated by the Nazis, with an agenda to return them. In 1998, the effort expanded with the Washington Conference on Holocaust-Era Assets, attended by more than 40 countries. It followed a joint pledge signed by 39 countries to compensate the heirs of Holocaust victims for stolen art. That same year, museum directors universally agreed to review provenance gaps in their collections that might indicate Nazi plunder.

A generational stalemate was beginning to break. Matthias Waschek, director of the Worcester Art Museum, worked at the Louvre in the late ’90s, when the approach to restitution started to shift. “The attitude then was: Why would these works go to their owners? Aren’t they a part of national heritage?” he said. “It took a little bit of time for people in the field to realize that this was actually immoral, that it was the product of the havoc that the Nazis generated.”

For Selldorff, an opportunity suddenly cracked open. He had been working on his own, writing letters, when he was contacted by the art historian Sophie Lillie. Around the year 2000, Lillie was working on a book about prewar Viennese art collections, and Neumann loomed large. She reached out to Selldorff to learn more, and found he was already deep into his own recovery effort. Lillie had documented about 50 of Neumann’s works recovered by the US Army and tracked their whereabouts. So far, she’s been able to help the family recover 16 pieces from museums in Austria and France.

This is nowhere near the end of the story. It’s almost as though the exhibition has disturbed old ghosts. In February of this year, another piece from Neumann’s collection surfaced, this time at a Sotheby’s auction in London: Alessandro Magnasco’s “Monks at Mealtime,” one of 38 pieces Neumann and his family took to Paris, only to sell under duress.

Restitution can be glacial; Selldorff’s decade-long recovery of works held at the Louvre was capped with a ceremony at the Ministry of Culture in 2013. In the case of the Magnasco, Neumann’s heirs were able to reach a swift accommodation with the seller, brokered by Sotheby’s, and the piece arrived in Worcester barely in time for the museum’s conservation lab to strip decades of nicotine-stained varnish from its surface and have it ready for the April opening.

The exhibition makes a point: That restitution is hardly history. It’s happening right now, every day, inch by inch. It’s a family tradition, Selldorff said, that his own children intend to carry on. “The real incentive was to impress my grandfather’s character onto our family,” he said. “The collection was the vehicle for doing that. His attitude, what a remarkable person he was — that’s really what this collection means to me.”