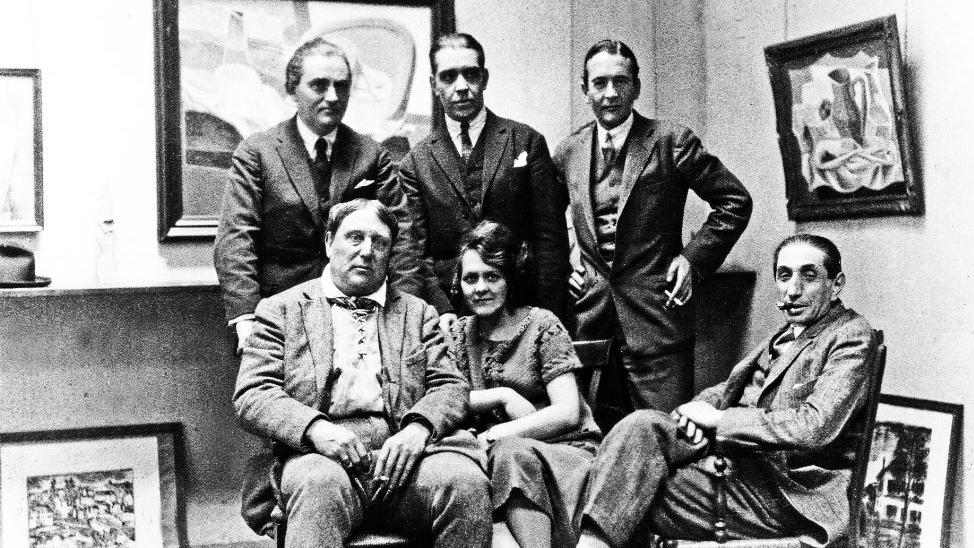 Could a bunch of outsider Jews with no formal art education, who inveigled themselves into the Paris scene when the French capital was the centre of the painting world, have made the market for modern art? It’s an intriguing theory posited by a culture historian who has researched their sudden and surprising rise to prominence in the half century preceding World War II.

“There was an affinity between entrepreneurial Jews and avantgarde artists,” explains Professor Charles Dellheim — and by avantgarde he is referring not only to Picasso, Chagall, Modigliani, and other 20th century greats but predecessors like Van Gogh, Monet and even Manet, who were considered outrageously out-there when they first showed their work.

"Le Dejeuner sur l’Herbe is a case in point,” adds the Boston University academic of the Manet canvas which shocked le tout Paris with its nude woman at the centre of a picnic party and was rejected by the Salon, at the time the sole arbiter of what was acceptable in art: “The failure of the old system to respond to such depictions of modern life created an opening, and only modest capital was required to make acquisitions — you could pick up a Picasso for 100 francs in 1901,” adds Dellheim.

Thus Alexandre Rosenberg started buying Van Goghs when no-one else was interested, his sons became Picasso’s dealers and confidantes, while the Bernheim Brothers were instrumental in helping organise the first en masse showing of Monet’s Waterlilies.

It’s all laid out in Dellheim’s fascinating book Belonging and Betraying: How Jews Made the Art World Modern, which he wrote because, as he explains over Zoom: “There’s been so much interest in Nazi-looted art, but to me the real story was how the art got into the hands of those who owned it in the first place.”

The belonging of the title says it all. Even after their emancipation, Jews remained outsiders who harnessed art to introduce “emblems of cosmopolitan standing” into their gilded new mansions — as true of American nouveau riche Jewish industrialists as their counterparts in London, Paris and Vienna: “Modern art became Jewish in the sense that it provided an entrée into high culture… a means of acculturation and affiliation for those who were departing from traditional Jewish communities and Orthodox practices,” Dellheim asserts.

This new breed of well-heeled culture vultures joined gentiles in buying from the likes of the Rosenbergs, horse dealer turned art dealer Nathan Wildenstein, his partner Ernest Gimpel, who previously brokered commodities, and Alfred Flechtheim, a former grain dealer who over the course of his dealing career amassed a fine collection by Van Gogh, Cezanne, Cauguin, Seurat, Rousseau and Munch.

He died in London in 1937 after fleeing Nazi Berlin, and the fact The Times made space for an obituary describing him as “the most intelligent and discerning of art dealers” was proof he had successfully parlayed his eye for a picture into a place in society.

The same was true of Joseph Duveen, the son of Hull shopkeeper Joel, who used art to climb the social ladder himself, donating a wing to the Tate. Joseph was knighted after funding more rooms at the museum, where he was snapped guiding George V and Queen Mary around the exhibits in a photograph Dellheim notes with acuity “presented him just as he wanted to be presented: an English gentleman fit for the finest company in the land.”

After becoming the first art dealerappointed a trustee of the Wallace Collection, he became Lord Duveen of Millbank in 1933, that most ominous of years for Jewish art dealers in Europe. Even before Hitler came to power, Flechtheim’s art auction in Dusseldorf was bombed by Nazi thugs, prompting his flight to London to join other cultured Mitteleuropean refugees in Hampstead, where the Cosmo café on Finchley Road became a favourite gathering place.

Paul Rosenberg found safe haven in New York, but despite being related to the gentile Vuittons, known collaborators, Rene Gimpel died at the hands of the Nazis who imprisoned him after looting his art treasures; with only two Jewish grandparents he might have escaped persecution in Cannes but instead chose to stay and join the Resistance with his sons. He escaped the gas chambers but died in a German camp a few months before Liberation.

While Dellheim doesn’t claim Jews exclusively shaped the 20th century art scene he argues: “Modernism became Jewish in the sense that for the first time in the history of art a cluster of Jewish outsiders came to play pivotal roles as artists, dealers, collectors and critics”, citing Pissarro, Soutine, Chagall, and Modigliani as the first Jewish creatives to make their mark as collectible artists.

How the dealers came to become so influential and successful is remarkable, considering the lack of exposure to art available to most growing up. Wildenstein had none when a client at his textiles shop asked him to help her sell her paintings.

He educated himself by moving to Paris, and spending every day for a week scrutinizing the paintings in the Louvre, explains Dellheim, who also recalls that Paul Rosenberg, the most successful dealer of them all, “shrieked with horror” as a small boy gazing upon his first Van Gogh, the famous Room In Arles which to modern eyes looks distinctly representational compared to the artist’s metaphysical Starry Night paintings.

He did, however, have a father, Alexandre, whose modest start as a grain dealer belied his eye for a good painting. After pointinf the “shocking” Van Gogh out to his son in a shop window he vowed to acquire more work by the artist who had not managed to attract sales during his lifetime.

This new breed of outsider dealers may have needed a good eye, but what they did not need was a lot of
cash; their arrival coincided with a wholesale sell-off by hard-up aristocratic families and the rise of the nouveaux-riches on both sides of the Atlantic who were ready.

That so many of them went on to lose their acquisitions to the Nazis is a subject Dellheim sees as “a Jewish story, the story of Jewish pride and family feelings, with museums careless of whether works they later showed were pillaged from Jewish collectors.” He accuses the museums which organized the 1997 blockbuster show Monet and the 20th Century of not having done due diligence in interrogating the rightful ownership of all the works on display, particularly the Waterlilies of 1904.

Paul Rosenberg bought the painting in the late 1920s, Nazi foreign minister Joachim von Ribbentrop seized it in 1940, after which “the Rosenberg heirs had been looking for it for decades!” It would be 1999, more than 40 years after their father’s death, that it would be returned to them by the French government and, says Dellheim, “the end is not yet in sight” so far as discovery and restitution of looted art is concerned.

But at least the advent of the internet should make it easier for heirs to spot and lay their claim to missing masterpieces without having to wait 50 years to spot them by chance as the star turns of an auction or touring exhibition.

Published by Brandeis University Press, £32 Charles Dellheim will be speaking about his book online on 6 December as part of London Art Week.