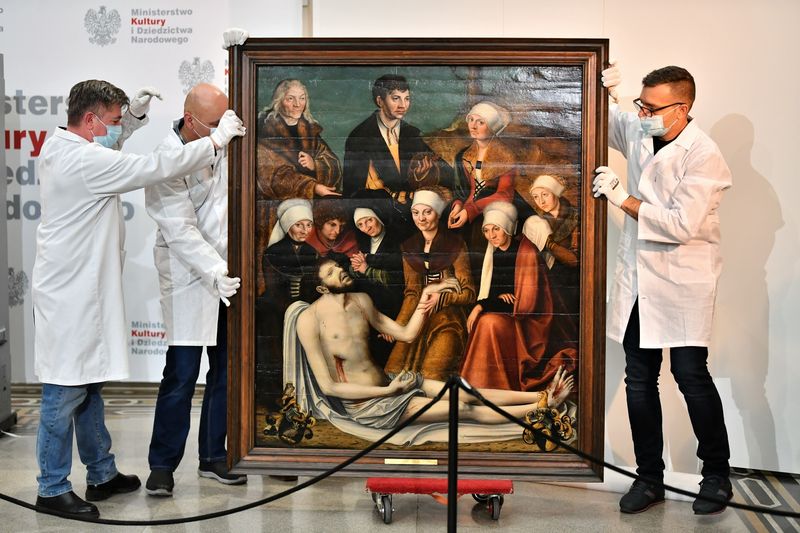 An oil painting lost during World War Two and restored nearly 80 years later, owing to a huge collective effort by the museum's staff and the Polish Culture Ministry, has returned to the National Museum in Wrocław, western Poland.

"The Lamentation of Christ" by an artist from the School of Lucas Cranach the Elder was formally handed over to the museum, on Monday, during a ceremony attended by Piotr Gliński, the culture minister and a deputy prime minister.

Lucas Cranach the Elder (1472-1553) was a leading German painter and engraver of the Renaissance period.

The work of art was returned to Wrocław by the Stockholm National Museum after it had been confirmed that the picture had been looted from the local cultural institution during the Second World War.

According to estimates, Poland lost over half-a-million works of art during World war Two. Over 60,000 of them have been identified and included in the Register of Looted Art of the Ministry of Culture and National Heritage. Poland has been gathering data on looted and lost artwork since the early 1990s.

"The painting, which returned to Poland today, was considered one of the most precious works of art lost during World War Two," Gliński said.

Having survived the siege of Wrocław in 1945, the painting was registered in November, 1945, as one of works taken to a storage facility in Kamieniec Ząbkowicki. However, in February, 1946, hundreds of pieces vanished from the warehouse, including "The Lamentation of Christ." Eventually, the painting ended up in Mariefred, near Stockholm, as a property of Sigfrid Haeggberg.

The Swedish museum purchased the painting at an auction from Haeggberg's heirs in 1970.