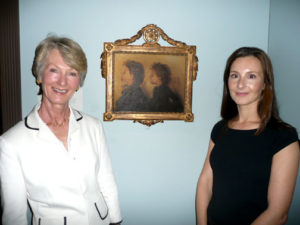 Marei von Sayer and her daughter Charlene von Saher at the Bruce Museum 2008 exhibit, “Reclaimed: Paintings from the Collection of Jacques Goudstikker.” The painting of two young girls was the only one returned to Goudstikker’s widow in her lifetime.

It’s been ages since hearing any news of the ongoing search by Marei von Sayer of the hundreds of paintings lost to the Nazis in WWII collected by her father-in-law, the Dutch art dealer Jacques Goudstikker. I met Marei back in 2008, then a Greenwich resident, when I reported on the Bruce Museum exhibit, “Reclaimed: Paintings from the Collection of Jacques Goudstikker” that featured some 38 paintings out of 200 returned in 2006 by the Dutch government – leaving over 800 and more still to be recovered. It seems that WWII stolen art search might prove lifelong for Marei now in her 70s.

So, what should appear in “The Art Newsletter” but news that Germany has just ruled to return to Marei a Nazi-looted 17th century Dutch Golden Age painting by Adam van Breen, with a subject matter and title surely resonating with Marei and her family, “Ice Skating.” Marei was a professional figure skater and coached at the Greenwich Skating Club, while daughter, Charlene, was a notable Olympic figure skater. The painting shows a crowded Dutch gathering scene on ice of warmly-dressed folk with one gentleman kicking up a rather odd looking ice skate!

But then it had also appealed to Hermann Goering, second-in-command to Adolf Hitler, who acquired it with 1100 or more works he looted from Goudstikker in 1940 who being Jewish had rushed to escape his country being taken over by Germany. But, sadly, aboard a ship with his young family bound for South America, he died from a fall at age 42.

“Ice Skating” came to Marei via a now familiar circuitous route. The painting was bequeathed in 1987 by a German collector to the German city of Trier where it hung in the city Museum until reportedly a provenance researcher found it listed on the website lostart.de, the German government database of Nazi-looted art. The museum contacted Marei’s lawyer Ewald Volhard, who will soon be presented with the painting by the mayor of Trier.

Vollard leads the Berlin-based Goudstikker Art Research Project with its website promising to soon present an inventory of returned paintings (goudstikker.com). The Project is definitely scoring recent successes. Others include a 19th century painting of roses by Philippe Rousseau for which Marei can thank the children of the deceased owner of the painting for noticing that Goudstikker label on the back of the painting and reaching out to Volhard. 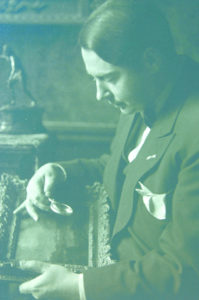 Auction house officials are also doing diligence – when Goudstikker identified art arrives, officials are contacting Volhard, such as a 15th century painting by Petrus Christus of a Madonna and child, and a still life by artist Abraham Hendricksz van Beyeren. Volhard is quoted recently that, “There has been a change of attitude in Germany…People are checking their own works.” And he is often receiving tips from art historians “about potential Goudstikker works in auction house catalogues and museums.” 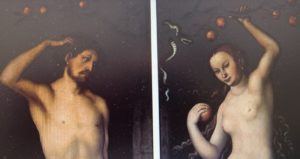 A cropped version of Lucas Cranach the Elder’s diptych “Adam and Eve.”

But Marei has suffered a significant loss as of three years ago from her efforts since the 1990’s to claim a pair of German Renaissance masterpieces that are in the Norton Simon Museum collection in Pasadena. They are life size nude paintings of “Adam and Eve,” by Lucas Cranach the Elder that Goudstikker acquired in 1931. At end of war the paintings were found in Goering’s estate and subsequently returned to the Dutch government. The Netherlands had created a claims process for people to recoup property stolen by the Nazis.

And here is where things get perplexing for this reporter. The family of Goudstikker, on advice from their lawyer, had chosen not to reclaim the masterpieces “for business reasons.” So, the Dutch government sold the paintings in 1966 to a Russian aristocrat who sold the paintings to the Norton Simon Museum in 1971, which has had them on display ever since.

But Marei von Saher took up the fight to reclaim them in the 1990’s and has fought in the courts to recover the masterpieces as part of the Goudstikker collection. She loses first with the Dutch government on the ground that her family had relinquished its rights after the war. She then takes Norton Simon Museum to federal court in Los Angeles that ruled in favor of the Museum, saying, the Dutch state validly owned the paintings when they were sold.
Marei then takes her case to the U.S. Supreme Court for their consideration, but alas, in 2019 the Supreme Court refused to reconsider what is now the Norton Simon Museum’s “Adam and Eve” paintings.
But the story doesn’t end there. There’s a new twist in the wind! An earlier history has been found of that Cranach pair of naked lovers, “Adam and Eve.” Look to Ukraine! Found in 1927 in Kyiv, beneath a staircase in a former monastery and now the state Khanenko Museum, a wooden “plaque” of two figures of Adam and Eve. When the plaque of two panels was restored, a snake with a coat of arms on its back appeared – the “signature” of Lucas Cranach the Elder!

Two years later the restored pair were confiscated by Soviet authorities at a time when those “Soviet authorities needed ‘hard cash.’” If they can sell the Cranach art at auction, they can get commissions. They find a Russian aristocrat “collector” who does the winning bid then sells the pair for $10,000 to Jacques Goudstikker in 1931.

Fast forward to the 1960’s when the heir of that Russian aristocrat learns of this forced Cranach sale and sues for his family’s right to the paintings “in accordance with restitution law.” He wins, and promptly sells “Adam and Eve” to the Norton Simon Museum. And now, the state of Ukraine is building its case to sue for restitution of those Cranachs from the Norton Simon Museum!

What is the fascination of those Cranach Adams and Eves? Lucas the Elder painted them often enough to fill at least a dozen museums around the world. The figures are painted on a dark background, each holding a small branch to cover their private parts, with Eve holding the apple, and a serpent hovering over her in the tree of the knowledge of good and evil.

This reporter first learned of that art years ago while steeped in WWII history of the Italian Campaign. It was in 1944 when the Germans occupied that part of Italy but were in retreat, when the great art of Florence was secretly hidden away in Tuscan villas. But somehow, the Germans knew where that Lucas Cranach “Adam and Eve” belonging to the Uffizi Museum was hidden. A Red Cross ambulance was their guise to take them away (unsuccessfully), so the history reveals, as “destined for Hermann Goering.” Wasn’t that Goudstikker “Adam and Eve” hanging in his living room enough?