A youth library in Chernihiv, formerly a museum, after Russian attacks

Russian strikes against the city of Chernihiv in northern Ukraine have left cultural heritage in the area severely damaged. A historic building associated with the regional history museum was almost destroyed by bombing on 11 March according to its director, Serhiy Laevsky.

In a searing Facebook post  he writes: "The House of the Vasil Tarnovski Museum of Ukrainian Antiquities. It survived shelling by the Bolsheviks in 1918 and 1919. It survived in the Second World War under the bombs of the German Nazis. The Moscow Nazi horde came and ruined a very beautiful and cozy building of the late 19th century—a monument of local history.”

The Gothic revival building—now a regional youth library—and the regional history museum, are named after one of Ukraine’s most famous collectors, whose possessions included artefacts related to leading historical figures such as the military leader Ivan Mazepa. They were confiscated and consolidated during the Soviet era and moved to another historic building that is the museum’s headquarters.

Chernihiv, one of Ukraine’s oldest and most historic cities that was once the centre of a principality that predates Moscow, was surrounded by Russian forces on 4 March and has been under heavy bombing and shelling. Serhiy Shumylo, a researcher at the Institute of History of Ukraine in Kyiv condemned the “purposeful and systematic destruction of the ancient city, whose history goes back more than 1,300 years” in a Facebook post and said that “all these crimes should become evidence for the international tribunal in The Hague against the Russian fascists.”

Laevsky said in a subsequent Facebook post that the main museum had been kept in “full order” and that “the damage that our branch suffered” had been minimised. He thanked the defence forces of Ukraine and told the Ukrainian media 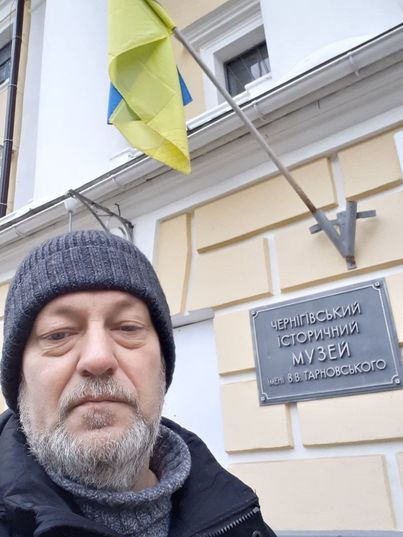 On Sunday, Laevsky wrote that the facade of another of the museum's buildings, a branch devoted to military history, had been damaged but that the contents were safe and had been moved to a secure location. He added that a new display dedicated to the Second World War was being developed and that the renovated space will also highlight “the heroism of our soldiers” and “resilience of civilians” today.

In a photo posted on Facebook on Monday morning, Laevsky appeared exhausted but defiant. “The 19th morning of the war. An anxious morning,” he wrote. “The museum vault is asleep and that's good. Soon the townspeople will awake and their worries living in a city under siege and under fire will begin.”