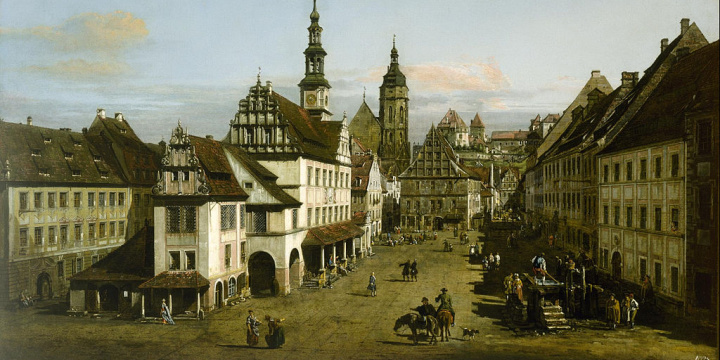 The Marketplace at Pirna (ca. 1764), by Bernardo Bellotto. Photo: Collection of the Museum of Fine Arts, Houston

The Museum of Fine Arts, Houston (MFAH) and the grandchildren of a German Jewish art collector were heard in federal court on Thursday over an 18th-century painting stolen by the Nazis before World War II.

MFAH maintained its legitimate claim to “The Marketplace at Pirna” by Bernardo Bellotto last year and denied that Dr. Max James Emden sold the item through a “forced sale,” according to a Houston Chronicle report. The museum hired a world renowned provenance researcher, Laurie Stein, who determined that Emden’s 1938 sale of the painting to the German government was voluntary, and that the he sold the painting through his longtime dealer and “openly pursued and received his asking price.”

“No new information has come to light that alters the voluntary character of the 1938 sale that Emden initiated,” a museum spokesperson told the outlet on Thursday.

Emden’s grandchildren believe they are the “rightful owners” of the landscape painting, arguing that Emden was forced to sell the painting to Adolf Hitler’s art dealer Karl Haberstock, and that the artwork should be returned to the family. The Monuments Men Foundation for the Preservation of Art has sided with the family in the case, saying that the painting was sold under duress and that MFAH “has an urgent duty … to promptly return the Bellotto painting to its rightful heirs.”

Thursday’s court hearing was to determine if the case should proceed to trial. The museum asked US District Judge Keith Ellison to dismiss the case, but Ellison indicated that he would announce his decision at a later date, according to The Houston Chronicle.

Bellotto’s original painting of “The Marketplace at Pirna” was commissioned for King Augustus III of Poland. The artwork depicts a city in Germany and shows a busy marketplace with the Sonnenstein Castle in the background.

The artist painted several smaller autographed replicas of the painting, one of which was owned by Emden, a German citizen and department store magnate. Emden’s heirs said the work was stolen from his personal collection in Switzerland, where he immigrated to prior to 1930. The painting was later discovered among thousands of others in a salt mine in Austria by the Monuments Men, a group of British and American curators, historians, librarians and architects who made it their mission to retrieve artwork stolen by the Nazis and to return them to their rightful owners.

According to a backgrounder post on the museum’s website, a researcher found that in May 1945, three Bellottos artworks owned by Emden were brought to a collecting area in Munich. The German government claimed ownership of two of the works because they were believed to have been sold willingly, but in 2019, a German commission returned the paintings to Emden’s heirs after determining that all three paintings were sold forcibly. The third Bellotto, of the Pirna marketplace, was incorrectly given by the Allies to the Dutch government in 1946. The museum said that the painting then ended up in the possession of international art dealer Hugo Moser, who sold it to a foundation who gave the work as a gift to MFAH in 1961.

Monuments Men Foundation asked to share its findings about the painting’s origins with MFAH, including false documents that were made about the artwork’s provenance in New York, but the museum declined.

MFAH argued in court documents that Emden’s family had the opportunity multiple times in the past to contest the ownership of the painting but did not. The family said in response it was only recently able to verify that the painting in the museum belonged to their grandfather.