The re-opening of Glasgow’s world-famous Burrell Gallery has been rocked by a ‘looting’ row over its horde of art treasures which were plundered by the Nazis.

The results of a near £70 million refurbishment programme will become evident tomorrow (Tuesday), when the Collection assembled by ‘millionaire magpie’ Sir William Burrell opens its doors again for the first time in six years.

It was already known that two works of art in Burrell’s Collection dated from 1930’s Germany, when they were stolen from Jewish owners.

Glasgow City Council was forced to pay compensation amounting to thousands of pounds to the owners’ descendants. 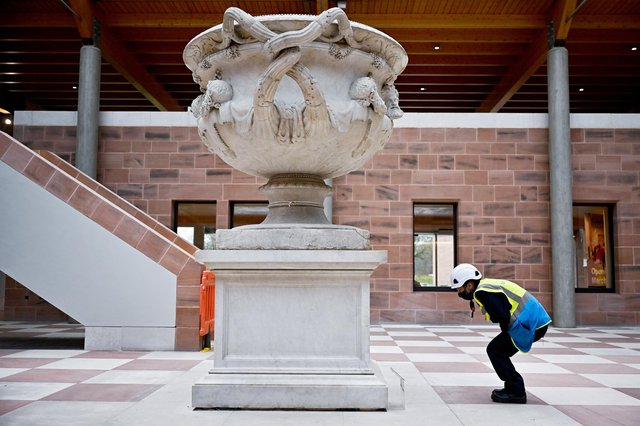 GLASGOW, SCOTLAND - FEBRUARY 08: Members of staff and workers at The Burrell Collection begin the finishing touches to the refurbished museum on February 08, 2022 in Glasgow, Scotland. The collection is named after the shipping magnate Sir William Burrell (1861 to 1958) who amassed more than 9,000 objects spanning 6,000 years of history. It includes work by major artists including Rodin, Degas and Cézanne plus important examples of late medieval art, Chinese and Islamic art, ancient civilizations. It reopens in March 2022.

But a new book by Glasgow Museums curator Martin Bellamy says more treasures can now be traced to ‘forced sales’ during Adolf Hitler’s rise to power.

‘A Collector’s Life: William Burrell’ states:”Research by the current curatorial team has indicated that there are other works in Burrell’s Collection that may have been acquired as a result of forced sales.”

Glasgow Life, however, would not say what these items are but now accepts that the claim is accurate.

The refusal to identify the works was condemned by Scotland’s leading historian, Sir Tom Devine.

He said:”As long as the provenance of these items is established by experts and curators, it should always be made public.

“The question the public will ask is ‘what do they have to hide?

“I find the refusal rather curious. Curators of museums always want the truth to be out, and unvarnished at that.”

Controversial museum items include an early 16th Century Swiss tapestry ‘The Visitation’ and a ‘Still Life’ painting by Jean-Baptiste-Simeon Chardin.

Glasgow Life has confirmed that while the tapestry is being held in storage, Chardin’s painting will be on display from Tuesday.

Also being showcased is a 200-year-old ‘rare bronze ritual wine vessel’ which was stolen during a raid by British troops on the summer palace in Peking in 1901. It dates from the Han Dynasty and is similar to another looted item from the palace which sold for £410,000 four years ago.

In their new book, Bellamy and co-author Isobel MacDonald reveal that shipowner Sir William was frank and open about the source of some of his purchases in small soft-backed exercise jotters which he used to record the provenance, description and price paid for each item.

The book adds:”Some of the practices that were employed would not be viewed as ethical today. For example, the purchase book entry for a ‘rare bronze ritual wine vessel’ purchased from T.J. Larkin carefully notes that it was ‘from the looting of the Summer Palace, Pekin, 1901.’

Glasgow Life said in a statement that the looting of the Peking palace was ‘officially sanctioned’. It added: “There is nothing to suggest Sir William Burrell was made aware works he was buying originated from forced sales.

“One further object, a Chinese wine pouring vessel, which is believed to have been taken during officially sanctioned looting by soldiers of the Summer Palace in Beijing in 1901, will be on display.”

The new-look Burrell Gallery starred in ‘Ant and Dec’s Saturday Night Takeaway’ as the Pollok Park location was used as a mystery destination in the popular ITV show.

In the programme, viewers are asked to race to an un-named location if they can work out where it is.