The collection of the Kherson Art Museum has reportedly been looted by Russian forces and taken it to Crimea, the Black Sea peninsula annexed by Russia in 2014.

Ukrainian troops entered the strategic city of Kherson on Friday (11 November) to cheers and hugs from local residents. The news comes just days after reports that Russian occupying forces in the illegally annexed region had engaged in organised mass looting of art from the Oleksiy Shovkunenko Kherson Art Museum and taken them to Simferopol in Crimea, the Black Sea peninsula annexed by Russia in 2014.

Russia announced on 9 November that it would retreat from Kherson, both underscoring its dramatic military setbacks and raising questions about whether it was a feint to lure Ukraine into a battle.

The Kherson region is one of four territories illegally annexed on 30 September with decrees by Russian President Vladimir Putin, posing an immediate risk to museum collections. In October, Russia stole  historical statues and the bones of Catherine the Great’s advisor Prince Grigory Potemkin  from Kherson, saying  it was evacuating them to safety. By declaring martial law in the annexed regions last month, Putin has “self-legalised” their looting. Reports have also emerged  of plans to “evacuate” museum collections in Crimea. Ukraine’s Ministry of Culture appealed to Unesco to prevent Russia’s further actions, calling them war crimes and a “violation of international law”.

In a 3 November Facebook post Kherson region's police wrote that it had “opened criminal proceedings [for] kidnapping and removal by Russian military into the territory of the aggressor country [...] artistic valuables from the Kherson Art Museum”.

The museum wrote in a 4 November Facebook post  that from 31 October to 3 November, “occupying ‘authorities’” brought up to four dozen people into the museum, loaded "everything their raking hands could reach" into vehicles, art was “wrapped in some rag” and “headed to Crimea”, describing these actions as “the kidnapping of one Ukraine’s best collections”.

The Armed Forces of Ukraine confirmed the looting in its daily report on 8 November. Svitlana Dumynska, the head of the culture department of the Kherson City Council also confirmed the museum looting and delivery to Simferopol at a briefing in Lviv, in western Ukraine, where she now lives. She said there is a similar situation with Kherson’s local history museum, although “we have much less information about it”.

Detailed reports are likely to emerge in the coming days about the scale of the looting and measures by Ukraine to return the collections.

Russian media has itself revealed a great deal of the evidence. Novaya Gazeta Europe,  a Russian opposition newspaper based in Europe, quoted a 75-year-old Kherson resident named Lydia about the looting of the art museum, which is near her home. "For three days now, Russian looters have been taking out all the paintings,” she said. “They’re loading them into their huge trucks [Ural army trucks—editor’s note]. Without any protection, without any packaging, as if they were rubbish… I cried the whole evening when I saw that.”

Ukrainian Art History
@ukr_arthistory·
Follow
The Russians looted the Kherson art museum and brought valuable works of the XVII-XX centuries to Simferopol. Kherson is under temporary occupation now. And then you ask why precious artworks in russian museums? Because they stole it. @suspilne_news 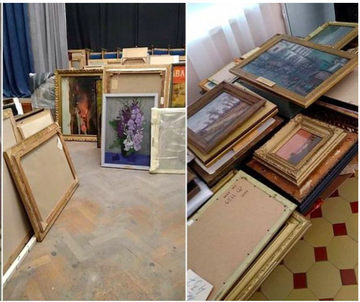 Photographs of stacks of paintings, allegedly from the Kherson Art Museum’s collection, have circulated in Ukrainian social and news media as have photos and videos of trucks being loaded in front of the Kherson museum building. According to the museum looted works ended up at Simferopol’s Central Museum of Taurida and several were identified as works by the painter and Kherson region native Ivan Pokhytonov, Ukrainian Modernist Mykhailo Andriienko-Nechytailo and Gabriel Gluck of the Transcarpathian School of Painting. Other images appeared to show the works being unloaded in Simferopol.The Moscow Times, an independent publication now based in Amsterdam, confirmed the reports with Andrei Malgin, the director of the Taurida museum. "Due to the introduction of martial law on the territory of the Kherson region, I have been instructed to take the exhibits of the Kherson Art Museum for temporary storage and ensure their safety until they are returned to their rightful owner," Malgin told the publication on 10 November.

Alina Dotsenko, the longtime director of the Kherson Art Museum, left for Kyiv in May after Russian occupiers asked her to put on a propaganda exhibition. She told Ukraine’s 1+1 media group on 6 November that she had initially managed to convince occupation officials that the museum collection, which she says includes valuable European works, had been moved in advance of the full-scale renovation of the over 3,000 sq. m museum building, which began in late 2021. She also erased the inventory catalogue from museum computers.

Dotsenko said that rogue pro-Russian staffers betrayed the museum. One of them, the exhibitions department head Natalya Koltsova, whom Dotsenko says she did not trust and had fired several years ago but rehired, allegedly revealed to Russian authorities that the collection had been taken down for the renovation and stored away in the building rather than evacuated by Ukrainian authorities.

In the interview, Dotsenko says that Koltsova came to the museum on 19 July with masked Russian FSB agents and new security guards to get into the collection storage. Marina Zhilina, the museum’s former chief curator, whom Dotsenko fired last year, had copied the collection database, and was called in as well to work with the Russian authorities. Pro-Ukrainian policemen had worked as museum guards until they were replaced by the museum’s Russian-installed collaborationist director, Natalya Desyatova, a former cabaret singer.

“Patriotic residents of Kherson who live nearby” had managed to photograph last week’s looting, Dotsenko said, at great risk since it is surrounded by roadblocks. Simferopol residents did the same when the museum cargo from Kherson arrived in Crimea, where it was taken in “five huge trucks”, said Dotsenko. Museum office equipment was stolen in a school bus, she added.

Ukraine’s culture ministry had contacted her at the beginning of the invasion, but could not provide logistics support for evacuation, said Dotsenko. “There was no time to do anything,” she said, describing the air raids that she witnessed and Russian occupiers entering the city in early March. “When the ministry proposed packing and evacuating 15,000 works, I asked, ‘What about movers, vehicles, guards?’”

On Friday, the museum’s Facebook page greeted the city’s liberation with an image of a 1993 painting from its collection by artist Serhiy Sinitsyn in the blue and yellow colours of Ukraine's flag. “Now all of Kherson is dressed in yellow and blue, preparing to greet the AFU [Armed Forces of Ukraine],” said the post. “We are awaiting the liberators! Glory to Ukraine! Glory to the Armed Forces of Ukraine!”

The final words of the museum’s post concerning Sinitsyn’s painting read: “The location of the work is currently unknown.”