'Fritz Bauer: The Jewish Prosecutor Who Brought Eichmann and Auschwitz to Trial'

Fritz Bauer: The Jewish Prosecutor Who Brought Eichmann and Auschwitz to Trial

Fritz Bauer (1903–1968) played a key role in the arrest of Adolf Eichmann and the initiation of the Frankfurt Auschwitz trials. There was a Jewish Museum exhibition in 2014 and then a film about Fritz Bauer as an Unlikely Movie Hero. Now an English translation of Ronen Steinke’s acclaimed biography has been published by Indiana University Press. Below is Kai Ambos’ English-language review: 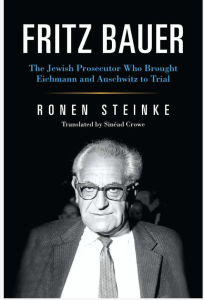 The contribution of Fritz Bauer to a legal reckoning with the Nazis’ legacy of atrocities is that of a fearless and nonconformist humanist who nonetheless remained aware of the overwhelming strength of his opponents and made his tactical choices accordingly. Fritz Bauer was faced with the double standards of post-war German society, whose conservative and often reactionary legal professionals promoted strict prosecution of even the most minor “moral crimes” on the one hand (most notably male homosexuality, which remained punishable by German law up until 1994) while at the same time jeopardizing all efforts to prosecute the most immoral of crimes. Apart from that the Nazi reign was only formally over, German post-war society was still very much controlled by Nazi networks, there was continuity in personal, institutional and legal terms.Footnote 1 Against this backdrop, Fritz Bauer would say: “Whenever I leave my office room, I find myself in enemy territory.”

A victim of Nazi persecution himself – Fritz Bauer had been arrested in his court house and taken to one of the first concentration camps shortly after the Nazis’ ascent to power in 1933 –, he was able after the war to take up his fight for justice from a position of influence: first as State prosecutor in the city of Brunswick, and after that more notably as State prosecutor in the bustling metropole of Frankfurt am Main. This fight came at great personal cost, with Fritz Bauer dying of a heart attack in the bath tub of his Frankfurt apartment at a mere 65 years of age in 1968. Constant attacks against Bauer by old Nazis and their political apologists – from within the post-war justice system as well as from outside – had taken their toll on Bauer’s health. His biographer Ronen Steinke, a lawyer and senior journalist working at the important German daily Süddeutsche Zeitung, reports this episode with the right degree of critical distance, steering his readers clear of any of the known conspiracy theories that claim Bauer was murdered or took his own life, and instead rests on original documents by Bauer’s coroner. The German original version of the bookFootnote 2 was first published in 2013 and was a great success appearing up to now in the 7th edition. It was translated in various languages (Polish, Japanese, Chinese and now English) and led to a revival of Fritz Bauer culminating in the cinema production “The People v. Fritz Bauer” in 2015.

Fritz Bauer’s struggle to bring Nazi atrocities to light and, in turn, to justice can be told as a story in three parts: first, his prosecuting the Nazi revivalist Sozialistische Reichspartei (SRP) which had been gaining traction particularly in the region of Lower Saxony in the early 1950s, then his initiating the Auschwitz trials in Frankfurt, and lastly his critical role in the capture of Adolf Eichmann in Argentina. Steinke tells these three parts knowledgeably, in gripping prose, and always with a focus on Bauer’s persona. What we as readers gain is a clear picture of this democratic and patriotically minded jurist, who pursued a goal larger than just uncovering the genocide of the Jews, i.e., his own family plight: uncovering the narrow-minded inhumanity of the Nazi system as a whole. Thus, in bringing the SRP leader Otto Ernst Remer to trial, Bauer sought to restore the honour of the German resistance against Hitler and particularly the honour of Stauffenberg whom the SRP leader had insulted as a traitor. It was here that Bauer famously made his point that an Unrechtsstaat (fundamentally unjust State) could never be the object of an act deserving of the word betrayal. With that, Bauer hinted at an idea familiar to modern international criminal law: that principles of justice and rule of law are unwritten prerequisites for a State to be deserving of loyalty.

Also, in the Auschwitz trial, which began in Frankfurt in 1963, Bauer took great care to avoid the impression that he was motivated by his own life’s story, instead sending young members of his staff to the court room to represent the case in his place. Bauer’s approach to prosecuting Auschwitz was to present the court with a representative sample of indictees picked from all levels of hierarchy within the death camp’s rank and file, in order to allow to illustrate the workings of this camp as a whole. Bauer argued that any person who participated in running this death camp should be found culpable for its outcomes, regardless of whether the court could prove what the contribution of that person had been precisely. Bauer thus effectively presents us with an early draft of the concept of joint criminal enterprise. This strategy of Bauer’s led to a better understanding of the Nazis’ system of annihilation while at the same time failing to distinguish fairly between perpetrators whose contribution to this annihilation had not all been the same or who might in some instances even have mitigated the inmates’ fate (e.g., Steinke highlights the story of SS doctor Franz Lucas).

Steinke, who holds a doctorate in international criminal law, discusses these and other legal questions in as much detail as is feasible in a book aiming for a broader, non-academic audience. Steinke delves into court rulings and even opinions from academia, and he does not shun from questions as fundamental as the purpose of these trials altogether, i.e. placing persons on the dock who had conformed with the political system around them rather than breaking rules. Here, Steinke rightly points to the expressive function of trials. He agrees with Bauer, who described his objective as “lessons for the future – for the audience”. After the Auschwitz trial however, Bauer was disappointed for exactly this reason. According to a survey, only 60 percent of Germans had even heard of the trial. In an interview with an Israeli journalist, Bauer commented: “The effect of these trials on audiences is minute, if it exists at all.”

Be that as it may. What is clear – and what this book makes clear – is that without people like Fritz Bauer there would have been none of this prosecution of Nazi atrocities, no trials for Auschwitz camp guards or Adolf Eichmann, no rehabilitation of the German resistance against Hitler. Moreover, without people of Fritz Bauer’s courage and conviction, German law today would not be what it has become, thanks also to the jurisdiction of the Supreme Constitutional Court, and that is: firmly bound to principles of justice and human dignity. In his foreword to this book, the (former) President of the German Constitutional Court, Andreas Voßkuhle, emphasises what can be achieved though means of the law and what can be made possible where “courage, sharp reasoning, and last but not least a tireless work ethos” come together. Ronen Steinke deserves thanks for bringing this message of Fritz Bauer back to light in such an accessible form, balancing professional distance and sympathy. This book deserves many readers and thanks to the excellent translation by Sinéad Crowe it can now also have them in the Anglo-American world of the new lingua franca.