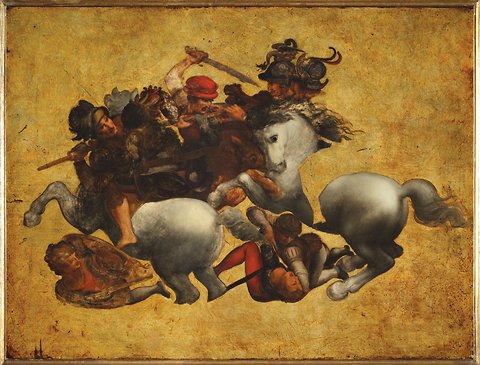 27 November 2012: In a joint statement released today in Rome, Italy, the Tokyo Fuji Art Museum (TFAM) and the Italian Ministry of Cultural Heritage and Activities announced that they have formally concluded an agreement of long-term cooperation, as well as TFAM’s donation to the Italian Republic of a major 16th-century painting known as the “Tavola Doria.”

An oil on panel (86x115 cm) painting, the Tavola Doria depicts a key scene of the design for the wall painting of the Battle of Anghiari that was commissioned to Leonardo da Vinci for the Palazzo Vecchio’s Hall of the Five Hundred in Florence, Italy.

Under terms of the agreement, the Italian ministry will loan the Tavola Doria to TFAM for exhibitions to be held in both Japan and abroad. The work will initially be exhibited in Italy until June 30, 2014 and then transferred to Japan for display for four years. The two parties also agreed to reciprocate on the exhibitions of acclaimed Italian artworks in Japan and TFAM’s collection of premier Japanese art in Italy, paving the way to a broader, more diverse range of cultural exchanges in the future.

Dr. Roberto Cecchi, Under-Secretary of the Italian Ministry of Cultural Heritage and Activities, declared that his ministry was “thrilled” by the work’s return to Italy. “We are immensely grateful to the Tokyo Fuji Art Museum for their most generous donation and look forward to our cooperation with the Museum” in the years to come, he said. “Japan is a country of great culture and we are pleased that we will be able to exhibit Italian paintings there and Japanese art here in Italy.”

In a statement, TFAM Director Akira Gokita commented: “We are proud and pleased that we were able to donate the Tavola Doria to Italy. We believe the return of the painting to its country of origin, as well as the research of the work and its exhibition to the general public, to be highly meaningful. We are also delighted to be able to organize important exhibitions of Italian art in Japan over the next several years and to cooperate with the Ministry on cultural exchanges on an expanded level.”

Under the direction of the Florence-based Opifiio delle Pietre Dure, a global authority on art restoration and conservation, experts will conduct further scientific research and critical evaluation of the work and the manifold questions that accompany it.